Here’s a big surprise (cough), I can’t stop being a 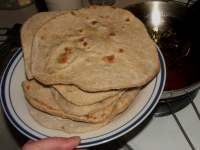 With apologies to Magritte and his estate:

This is not rosemary focaccia.

I mixed the focaccia dough at around noon. It was around 25C in the kitchen. The dough hadn’t even budged by 5:00pm. Still no sign of any rising by 6:00. Because we had all that rosemary, I briefly toyed with making lavash or those fabulous flat wafer thin Italian breads that have rosemary baked into them. But I’ve never made anything like that and the way things were going, I thought it best to cut my losses and go with something I knew how to do. 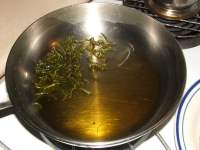 So I decided to cut the dough into 8 pieces and try making pitas. And T had the brilliant idea to toss the rosemary leaves in hot oil to make rosemary flavoured oil for dipping.

As I was beating myself up that I had failed yet again, I wracked my brains trying to think what was different.

Nope. I couldn’t see what the problem could have been. But the dough rolled out beautifully and I cooked the discs chapati-style on the stove. They all puffed. There are pockets.

Before you answer that, STOP. I’ll answer for you: No, sorry, not yet. Better luck next time.

Why am I so certain the answer is “no”?

Here is what I did to not make rosemary foccaccia or pita:

Flatbread resembling Pita?
based on our recipe for focaccia

As you taste the flatbread that looks like pita and marvel that it actually doesn’t taste so bad, keep wondering why on earth the dough didn’t rise.***

*** This morning, T found a little dish of creamy looking water on top of the stove. There were a few fruit flies doing the breast stroke in it. The liquid smelled faintly of apples. 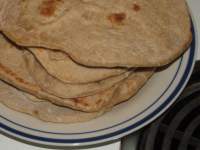 Hmmmm, if there was no yeast in the dough, these can’t really be called “pitas”, can they? I think they have to be considered as “chapatis” because they are yeast-free.

And THAT’S why my focaccia dough refused to rise.

I forgot to add the yeasted water to the dough!

And THAT’S why I’m still a BBBwB. Do they make special panties for BBBwB’s too? Are they the really ugly kind that are heavy duty white cotton and go right up to the waist with a “comfort” waistband that is so far from being lace that it’s laughable?

At least bread dipped into rosemary oil is good. It’s not quite as good as rosemary focaccia though.

[T]hose of you who would like to join us and be a Bread Baking Buddy should bake the pita, post about in on your blog and then send [Ilva] the link to the blog post before midnight (your) on the 10th of September [2008].

Take a look at the Bread Baking Babes’ pita:

I’m not sure if this is an acceptable post for YeastSpotting. My “for” argument is that it is acceptable because T spotted the yeast languishing on the stovetop several hours after the bread had been baked.

10 responses to “no rise focaccia: turn it into flatbread (BBBwB)”