It’s a hangover dish. Or at least it seems like the dish was invented by a drunk. – Aaron Garcia, owner of Pialeadero de Guadalajara, Mexico City, June 2017 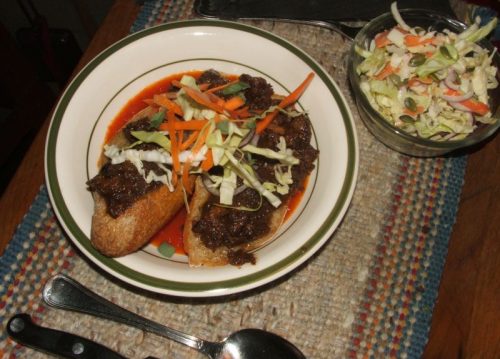 One of the reasons that Karen (Karen’s Kitchen Stories) decided we BBBabes should make Birotes Saladas this month was so we could make tortas ahogadas (drowned sandwiches).

Here is what David Norman and Bryan Ford have to say about the sandwiches:

They say the torta ahogada was invented by accident when a sandwich vendor dropped a carnitas-filled roll into a vat of tomato salsa. It is now ubiquitous in the market stalls, street cars, and restaurants of Mexico’s second largest city.
There are two sauces, one a flavorful but not spicy tomato sauce for “drowning” the sandwich, and a second made from arbol chiles, potent and fiery, used to cusomize the heat level. […] I read that a true Tapatio (a native of Guadalajar) supposedly can eat this sandwich by hand with only one napkin […] One important element in a torta ahogada is the refried beans used to coat the inside of the cut rolls. In Guadalajara, Mayocoba beans are treaditionally used […] [but, you] can use any variety except black beans.

– David Norman, Bread on the Table | Torta Ahogado – Sandwich from Gadalajara, p235
I find nothing more satisfying than recreating the unique breads of Latin America in my very own kitchen. I especially love when the bread is meant to be stuffed with savory fillings and drowned in spicy salsa—in Mexico, the torta ahogada is just that.

Hmmm. I find it difficult to believe that drowning the sandwich in tomato salsa wasn’t entirely by design.

I gather from reading various historical sources that Birotes Salados were introduced to Guadalajara by the French in the 1860s when they were attempting to invade Mexico under the Hapsburg Maximilian I (Franz Joseph I’s younger brother).

[The] baguette-like shape is a sign of French influence. The French invaded Puebla in the mid-nineteenth century and were defeated in 1867, but their influence over Mexican cuisine continued decades after their defeat due, in large part, to president Porfirio Díaz’s obsession with French food. It was under Díaz’s rule that many of Mexico’s pan dulce pastries were created, and it’s possible that the bolillo comes from this time as well. When exactly the torta came to be is still a mystery, but by the mid-twentieth century, the sandwich was firmly cemented in Mexican food and culture.

– Masterclass: Guide to Mexican Tortas: 5 Traditional Types of Tortas | A Brief History of the Torta

At least one source says that freshly baked bread was served to the French soldiers, and day-old bread was given away to the general Mexican population. My theory – unsubstantiated by anyone, is that having to eat day-old really really crusty bread is why the Guadalajarans developed Tortas Ahogadas – just so that really tough crust on stale bread wouldn’t break their teeth!

I thought of this when we were trying our mixed-up version of Tortas Ahogados the first night and both of us had a devil of a time sawing through the crust…. 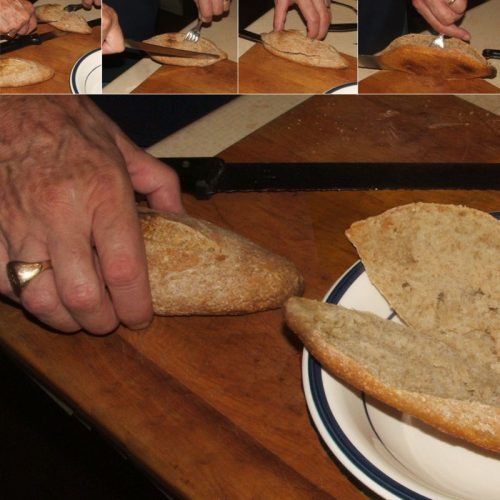 Even though almost all of the recipes I skimmed called for refried beans, carnitas, two salsas (chile and tomato) and onions, it also seems not unlikely that there are as many ways to prepare Tortas Ahogodas as there are Guadalajarans.

For instance, Todd Coleman (his parents came from Zacatecas, just north of Guadalajara) does not include refried beans in his Torta Ahogada. Nor does Pati Jinich in her Tortas Ahogadas.

Condiments […] star in the torta ahogada, from the Mexican state of Jalisco, a unique “drowned” sandwich of pork swimming in chile sauce.

– SAVEUR No.137 (April 2011) | South of the Border – Latin American Sandwiches, p.81
El Pialadero de Guadalajara, just a few blocks from Reforma, packed with these office workers almost every day of the week. Pialadero’s specialty is one of Mexico’s messiest plates, the torta ahogada (or “drowning sandwich”). It is a meal so sloppy that the restaurant provides diners protective plastic gloves to don while eating it. […] [T]ortas ahogadas are one of the most beloved cultural exports from the northern Mexican state of Jalisco, where the city of Guadalajara is located. The dish consists of carnitas, pork slowly cooked in its own fat, stuffed into a crusty roll […] which is then doused in a red tomato or chili sauce that pools at the bottom of the plate. Ideally, the moist sauce suffuses the bread’s hard crust, resulting in a semi-mushy outer texture that doesn’t fall apart.

Because a.) we are from the far north and have never been to Guadalajara or Mexico City, b.) do not speak/read Spanish and are reliant on Google Translate, and c.) our fridge is quite full with left-overs already, we gave ourself permission to make our very own version of tortas ahogadas. We decided to follow Coleman and Jinich’s leads by not to adding to the zillions of leftovers in our fridge by cooking too many beans just to include refried beans in the sandwiches. We chose to slather the buns with butter instead.

We also didn’t make carnitas. On the day we baked the birotes, T had barbecued a big piece of pork butt. There was LOTS left over. The next day, he made a spectacular chili-laced stew with it to put into our sandwiches. And instead of pickled onions that David Norman puts into his Tortas Ahogadas, T made quick-pickled cabbage and carrots. And zero tomato salsa…. We served the sandwiches open-face, dribbled ever so slightly with a Scotch Bonnet hot sauce – just in case the chili-laced pork butt wasn’t hot enough

, and bowls of creamy pepita-laced cole slaw on the side. Very creamy cole slaw. 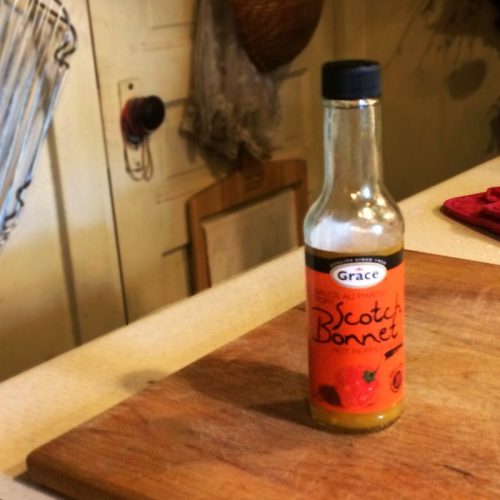 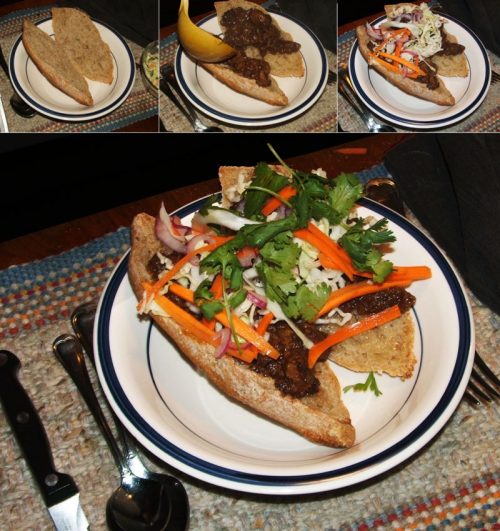 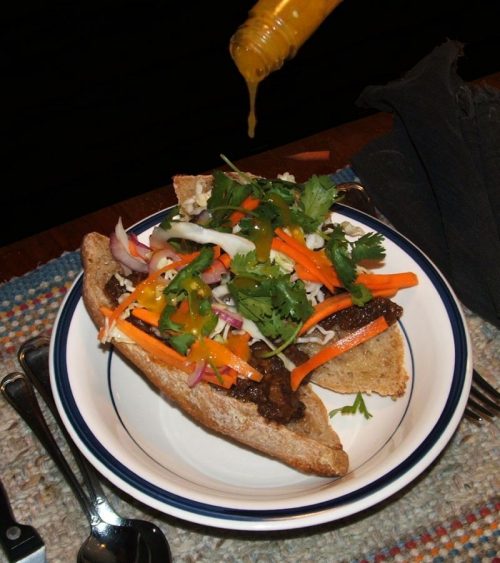 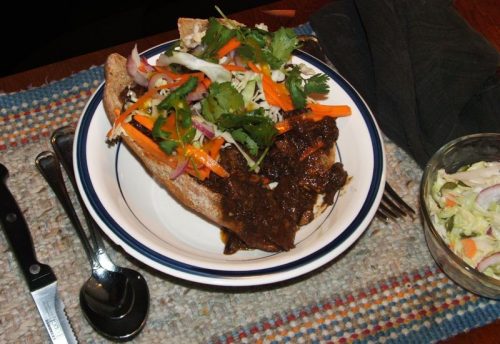 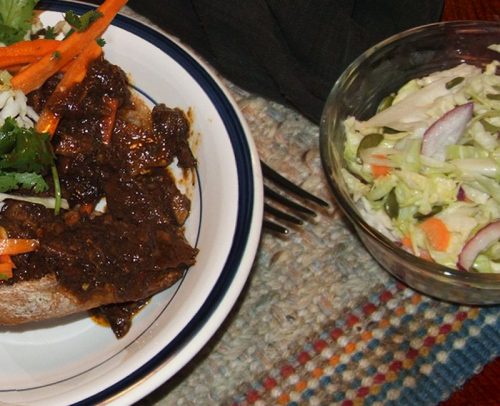 Well. The sandwiches were delicious. At least they were delicious once we managed to saw through the crust to get bite sized pieces…. The chewy bites were even more delicious when I drizzled the top of my sandwich with the way-too-much dressing from my bowl of cole slaw.

Indeed, the sandwiches were so delicious that we had them again the next night. This time, T made a tomato/red pepper salsa to pour into the bowl underneath the bread. He chose NOT to make more pickled vegetables, deciding that fresh vegetables would be more pleasing.

The salsa in the bottom of the bowl did make sawing through the crust a little easier. But not much. With all that sawing, delicious as it was, it took ages to finish dinner! 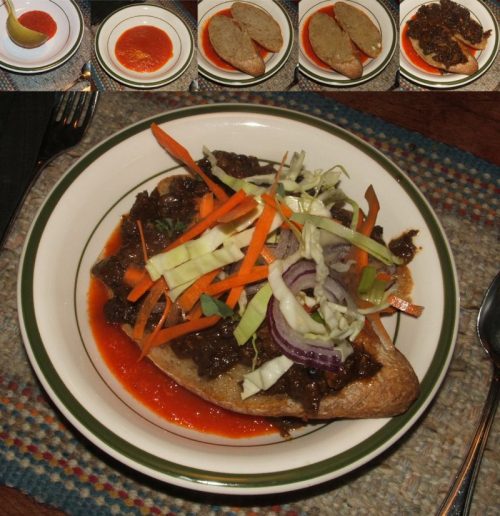 In fact, these sandwiches would be the perfect thing to serve to someone who is having difficulty learning how to eat slowly….

We still have lots of chili-laced stew left. But no birotes salados! Eeeeek! Time to mix more dough.

Thank you once again, Karen, for a wonderful introduction to a new (for us) cuisine! 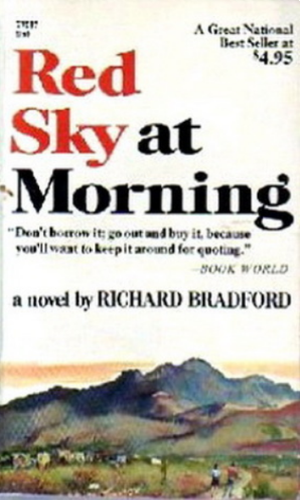 I recently re-read Richard Bradford’s wonderful novel, “Red Sky at Morning”. The book was my introduction to carnitas. The first time I read the book (way back in the last century), it didn’t occur to me to do anything but drool longingly at the description. But now that I have a resident chef, once the heat and humidity breaks and we need to be comforted because of frost warnings at night again, I think we neeeeeeed to try carnitas:

From the oven she took a dish of carnitas de puerco which, after stuffed pompano, is my favorite food in the world, and gave some to Tony along with a few tortillas made of blue corn meal. He wolfed it down and had another cup of coffee, and then left, saying he’d be back for dinner.
“You hungry?” she asked me.
“No,” I said, “I had a big breakfast and ate a sandwich on the bus.” It was a lie. I was starving.
“Well, have some carnitas anyway.”
“I couldn’t. Absolutely. I’d bust.”
“Vicky, give your novio here some carnitas before I get mad and push him out in the snow.”
While Vicky was dishing up the meat, she went on. “Look, niñito, we still have lots of pigs. We can last all winter on no money at all if we have to, and that’s more than you can do. Eat your carnitas or I’ll get insulted.”
The little cubes of pork had been baking all morning, and each time I bit into one my eyelids got heavy, as though someone were rubbing warm butter on them. It should be against the law to do anything to a pig but chop him up into cubes for carnitas. No ham, no spareribs, no pork chops, no bacon.

$4.50 really is what is on the paperback cover of our copy of “Red Sky at Morning”. The only difference from the image above is that there is a small black maple leaf just under Richard Bradford’s name, with the words “Published in Canada” superimposed on top. (If I weren’t too lazy, I’d take a photo of our cover, rather than copying one I found on Goodreads. 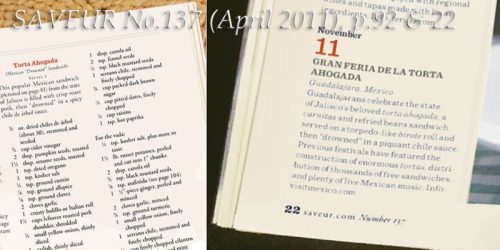 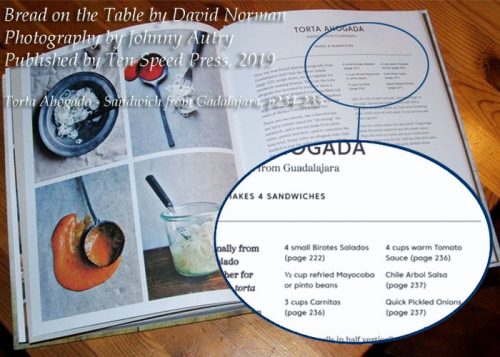