summary: Creating a Culture – Day 5 of capturing wild yeast from Chad Robertson’s “Tartine Bread”; Is there Country Bread in the near future? (click on images to see larger views and more photos) 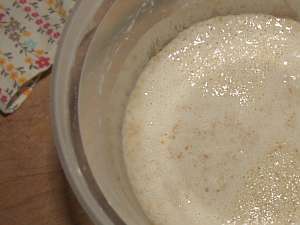 It no longer reeks! In fact it just smells mildly of yoghurt. And it’s nicely foamy. But I’m not going to get tricked into building it up as an actual starter too soon. I’ll feed for it a couple more days.

Which makes me say Oh oh again. Here we are, back to having to feed a greedy pet and discard what appears to be perfectly usable portions of bubbling flour and water.

I know. It’s just a few tablespoons of flour per day. But flour is expensive now. And I hate throwing food away.

I must say that yesterday, as we headed into day 3 of a revolting little heat wave (record breaking temperatures) and it was sticky and hot in the kitchen, I was thinking I had made a mistake to start this venture before the heat wave broke. Robertson does murmur something about “no extreme temperatures” and “place in a cool, shaded spot”.

The only sure way to mess up a starter is to neglect it for a long period of time or subject it to extreme temperatures. Even then, a cycle of regular feedings will usually restore the vitality of your starter.

Hmmmm. The shade was there – our kitchen is pretty dark. But, what do YOU think? Is 25-28C considered “cool”?

Still, as it’s turning out, my worries seem needless. The discard from yesterday didn’t reek at all. By any means. It seemed rather appetizing. The mixture was foamy and active. It screamed to be mixed into something. Like muffins. Or pancakes.

Yes!! Pancakes!! With goat’s cheese and stewed cherries. So that’s what T did. (Sorry no photo.)

In a most uncharacteristic move, he made the pancake batter with half all-purpose flour and half wholewheat flour! He NEVER uses wholewheat flour. In fact, the other day when I was kneading his sandwich bread, he eyed it suspiciously and asked if I’d slipped MORE whole wheat in than usual (no, I used the same amount of whole wheat flour; I slipped in more ground flaxseed than usual…).

So I was really really surprised when T said he wanted the pancakes to be grainier than usual. The resulting pancakes were indeed grainier but also turned out to be a little on the spongy side. However, I loved them. They were delicious!

T did not love them. He was most disappointed.

So, when he saw and smelled this morning’s left-over sludge slated to be discarded, he declared that he was going to redeem himself and make pancakes again. Who was I to argue?

This time, he made the dough with all-purpose flour and a little jowar (sorghum flour). The resulting pancakes were fabulous. They were, in fact, the best pancakes he’s ever made. (Once again, no photographic proof; we ate all the evidence with goat cheese, honey and sliced banana.)

So all in all, I would say that I’m in a win-win situation. We had great breakfast. Again. The sludge is bubbling up and falling without splitting into a stinking vinegary mess. Maybe we can have UNsour wild yeast bread soon!

When your starter is rising and falling in a predictable manner, you are now ready to make bread.

I’m really trying hard not to get ahead of myself. I MUST allow the sludge to be fed and then rise and fall a few more times before I try to make it into an actual starter for bread.

I’m champing at the bit. I want to start making a starter NOW!

It will be quite interesting to see how different the sludge is tomorrow morning. We had a brilliant rain storm last night that brought in a lovely cool front and the temperature is much more manageable – around 22C and far less humid.

Hmmmm… what will we do with tomorrow’s left-overs? We can’t have pancakes AGAIN! 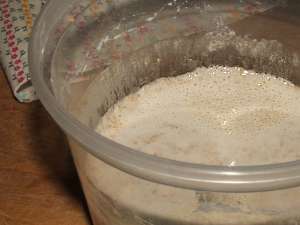 2 responses to “Oh oh… it appears to be working”