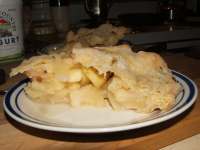 We have recently discovered the wonders of standard pastry made with lard rather than vegetable shortening. And we were thinking about the almost liquid consistency of lard and how we might achieve that same consistency with olive oil.

I have made an Italian-style olive oil pastry for torte verde (Spinach tart), but that pastry is kneaded like Indian flat bread dough. T wanted to try making regular pastry with olive oil. To make the olive oil resemble lard as best we could, we put it in the coldest part of the fridge for several days. 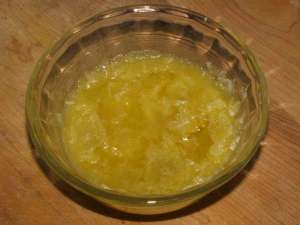 And amazingly, it worked! The resulting pastry wasn’t quite as flaky as pastry made with lard but it’s still really really good. (We also tried this with canola oil. It was not nearly as successful and the resulting pastry became quite flabby overnight.)

Here’s what T did to make this particular apple pie:

Serve warm as is, with creme fraiche, plain yoghurt or thinly sliced cheddar cheese, shaved parmesan – or, if you must, vanilla ice cream. 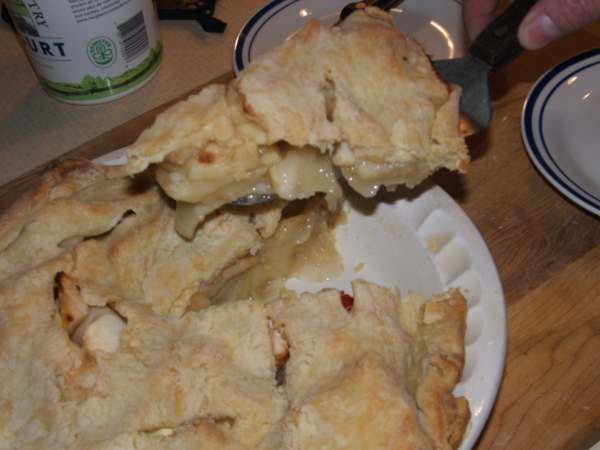 Then you shall have some pie!

We finished this apple pie already. And there isn’t any more.

(I just now realized that I should really have cut the pie in squares so I could have said “pie are squared” :-))

Alanna (Kitchen Parade) has put together an event to celebrate Pi Day (March 14). In the event announcement, she wrote the following:

Pi Day is about homemade pie crusts, whether a favorite pie crust recipe, whether a new-to-you recipe with a particular technique, whether your own innovative twist on pastry […] All are welcome, so long as the pastry is homemade.

The deadline for entering Pi Day is 14 March (or if you prefer: 3/14) 2008 . For complete details on how to participate in Pi Day, please see the following: