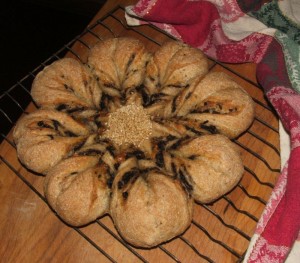 What is it about December? I get always very confused about time. At the beginning of December, I think there’s tons of time until Christmas. And then, in the same delusional state, I decide that I’ll put together yet another Advent calendar, because it really takes no time at all. {cough}

I cannot believe that I actually managed to put together a little puzzle and/or quiz other years as well. This year, there were bitter complaints about the lack of puzzle when a puzzle was promised. Sorry about that!! As it was, it was a miracle that the calendar was finished in time!

You can’t teach an old dog new tricks. Can you?

So. When the Christmas packages were wrapped and sent off in early December and the Advent calendar was finished on 21 December, I patted myself on the back and thought about how relaxed everything was this year.

And then on 23 December, I woke up suddenly at 6AM and remembered that we didn’t. have. any. cookies. yet. Actually, we did. T is good at planning ahead. He had already made shortbread. What a showoff.

We also had Vinarterta (best ever… remind me to make the official change to call for ground almonds instead of almond extract!) and I knew that my sister had made Mum’s Christmas cake and had sent it to us in our Christmas package.

But having only one kind of cookie just doesn’t seem right. Luckily, recipes can be cut into quarters and I whipped down to the kitchen and made four different kinds of cookies. And while I was at it, I made two kinds of bread as well. Because we neeeeeeeed molasses fennel rye bread to go with chicken liver and green pepper corn pate!

And then Christmas Day arrived and I began to relax again. Because it would be AGES before New Year’s Eve.

With this year’s distinctly non-snowy weather, we’ve been bike-riding a lot. (I have to confess that I’m starting to hope for snow though. It’s mighty cold riding when the temperature is hovering around freezing.) But we do plan to ride today to visit friends for New Year’s Eve brunch.

Yesterday was an echo of the 23rd. On the sixth day of Christmas, I woke up around 6:30 and suddenly (duh) realized that we were going to take duxelles, red pepper pate and bread to the brunch. 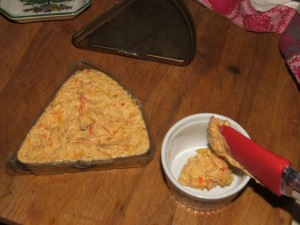 Making the red pepper pate was a little trickier though. We had only one small red pepper, a couple of medium sized yellow peppers and a largish orange pepper. We had zero green onions and no cream cheese. So I substituted with finely chopped cooking onion and goat’s cheese. And you know what? Even though the pate still looks like dog’s breakfast, it tastes even better than the original version!

While I was making the bread, I remembered that our New Year’s Eve feast tonight is cheese fondue. We neeeeeeeeeeeed to have Clark’s molasses fennel rye bread with that too. And over the course of the last few days, somebody (who shall remain nameless – suffice it to say that her name starts with E and rhymes with a-dizzy-piggy) ate all the molasses fennel rye that was baked just before Christmas Day.

I’m happy to report that we will not be going empty-handed to our friends in a couple of hours AND our cheese fondue will be complete.

That calls for a reward! Shall I have some Christmas Cake? It too, is the best ever. (Thank you, P!!) And I love that it’s ALL mine. Because it has my name on it…. October’s malicious bots are tenacious; commenting still has to be disabled. Perhaps the bots will get tired of their pointless game soon..

edit 25 February 2015: I finally have commenting allowed again! Whoohooooo! (read more here about the hoops I jumped through)