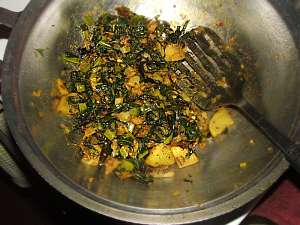 Isn’t it amazing how a new word suddenly starts appearing?

A couple of weeks ago, I was wandering around Heather’s (girlichef) pages and was particularly intrigued by her rice dish with ajwain. At the time, I asked T if he’d ever heard of ajwain. Answer: Yes but he didn’t remember the taste. And then I bookmarked Heather’s rice and then promptly forgot about it. (Sorry, Heather.)

Yesterday, when I got home just before dinner of vegetarian Indian food, T was jumping up and down with excitement. He told me that I HAD to taste the collard greens and potatoes made with this new spice he’d just bought. The new spice?

And why had T suddenly decided to get ajwain? Because he’s been bothered with having too much phlegm. He did a google search and saw several pages recommending taking ajwain.

But what IS ajwain anyway?? It looks like dill…. But it smells like thyme. Happily, the inimitable Gernot Katzer has a whole page about ajwain:

Ajwain [aka] Carom, Ajowan, Bishop’s Weed, Ajwan; falsely lovage seeds […] The essential oil (2.5 to 5% in the dried fruits) is dominated by thymol […]

The strong aroma is enhanced by toasting or frying and goes well with potatoes or fish. Legumes (lentils, beans) are […] commonly flavoured with a perfumed butter frequently containing ajwain. This seemingly simple preparation is much more sophisticated than sheer heat treatment, since most aroma compounds in spices are lipophilic and dissolve much better in fat than in water. Thus, frying in butter not only enhances the fragrance because of the high temperature, but also extracts the flavour to the fat, whence it can be dispersed throughout the food efficiently. […]

In Southern Indian cuisine […] preparations are not only applied to dried legumes, but also to green vegetables and boiled rice. Most popular for this purpose are black mustard seeds which are fried until they stop popping and curry leaves, which are fried for but a few seconds. Besides clarified butter, coconut fat is common.

Outside of the Indian subcontinent, ajwain is not much used.

[…] Ajwain is much used as a medical plant in Ayurvedic medicine (India). Mainly, it helps against diseases of the digestive tract and fever. In India, where any amount of tap water can result in arbitrary complications, ajwain often comes to the traveller’s rescue: Just chew one spoonful of the fruits for a few minutes and wash down with hot water. In the West, thymol is used in medicines against cough and throat irritation.

Well, why isn’t it much used outside the Indian subcontinent?? It’s fabulous!

Ajwain not only smells like it but tastes a lot like thyme. (Ha. Gernot Katzer and Heather already mentioned that… but we arrived at the flavour sensation all on our own. :-)). And ajwain is brilliant with collard greens and potatoes. I confess that I’m getting a little tired of collard greens. I made an error one night to use them instead of rapini in our favourite pasta and ever since then haven’t been the biggest fan of collard greens.

The really wonderful thing is that ajwain completely removes the sort of metallic flavour of collard greens to smooth them out just a little. Not in a bad way, mind. The collard greens taste fabulous.

Now that we’ve discovered the wonders of ajwain, we really must try Heather’s rice dish! (We did put ajwain into the Spanish rice for tonight’s dinner….) 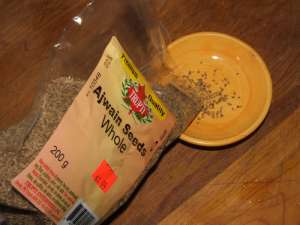 Apparently, ajwain is supposed to be really really good for relieving gas, improving digestion, as well as the treatment of colic and hysteria.

For the nervous type of woman having occasional attacks of hysteria due to gas and improper digestion, the use of Ajwain seeds has been found highly effective.

We went to our local Health Food store and were told that they didn’t carry Bishop’s Weed because it’s quite rare (!) We were told to try the Herbalist a few blocks north. The herbalist did indeed have ajwain; we were amazed to learn that they were charging $5/100gm for their ajwain seeds. Oh my. At the Indian grocery store, we purchased 200gm for $1.99….

Of course, even though the ajwain we bought is “premium quality” there is a disclaimer on the package saying:

Perhaps this is why there is such a difference in price.