Several weeks ago, I bemoaned the fact that I had never taken any photos of our popovers and said “I must make popovers soon!” …I did make them the following week. And again at the beginning of January. And again last night. Here at last is the proof:

Back in October, Katie (Thyme For Cooking) posted Popovers – easiest bread possible! Really! I couldn’t agree with her more. They really are the easiest things to make. And SO satisfying too!

I remember almost fainting with anticipation whenever Mum made popovers. I can conjure up the aromas of the roast resting on the counter and feel how chapped my hands were from peeling all those potatoes and carrots and see Mum carving little cross patterns into the Brussels sprouts and hear the gentle clatter of silverware and good china as someone set the table.

Yes, I adore popovers! What am I saying? WE adore popovers. With way too much gravy. It doesn’t matter what kind of gravy either – roast chicken gravy, pot roast gravy, dark chocolate-chili gravy, duck à l’orange gravy – they’re all good.

So. What are popovers? Whenever I hear that question I can’t help but think of the following conversation that T reported hearing when he was motorcycling through the mid-western states on his way to Minneapolis.

Blue Kerchief Lady: [in a heavy mid-western accent (...think "Fargo")] Last night we had popovers and they were so good!

Blue Kerchief Lady: Oh, my stars! You don’t know what popovers are?! Why, they’re like a big bun with air in the middle!

– overheard one morning in a small cafe in rural Minnesota

When I was growing up, Mum and Dad always called our popovers Yorkshire Pudding. It wasn’t until we were served Yorkshire Pudding at someone else’s house that I learned it was supposed to be one giant pudding rather than several small ones. I have only had it once that way… it looked pretty spectacular but some people got saddled with inside portions of the pudding that had no crispy parts.

Traditionally, Yorkshire Pudding was cooked in roasting pan in the fat thrown from the roast. But nowadays, our meat is really too lean to do that. So I use olive oil and a little butter for making popovers. (And if there happens to be any fat left over from the roast, I add that too.) And because we love the crispness of the popped part of the pudding, I always make several small Yorkshire puddings rather than one giant one.

Apparently, popovers are difficult to make. Or at least, this is what people will have you believe.

I used to think so too. I was wrong.

Perhaps I got this idea because of the popovers’ propensity to cause fires in the oven. (This really did happen a couple of times when I was growing up and was where I learned that one should always have an open box of baking soda on hand to instantly smother flames.)

To counteract this problem, instead of the muffin tins that Mum always used, I put the fat (I use olive oil and butter; Mom always used the beef fat from the Sunday roast) into pyrex dishes placed on a jelly roll sheet to ensure that any oil spitting out goes onto the sheet instead of the bottom of the oven and/or element.

Now that fear of fires is gone, for me, the most difficult thing about making popovers is to remember to get egg and milk to room temperature. If I haven’t planned ahead, I can do this the quick way, of course: put the egg (shell on still) and milk (in its measuring container) into a very warm water bath until they are no longer fridge cold.

Unlike many other popover cooks (I learned the method I use from my mom – who learned it from her mom, who learned it from her mom, etc. etc.), I put zero fat into the batter itself. Instead, as I’m whisking the eggs, I always preheat the fat into small pyrex bowls or muffin tins and put the bowls onto a jelly roll pan in a hot oven til the fat is very very very hot. So hot that the popover batter bubbles and sizzles as it is poured into the hot oil. The times that I have not done this, the popovers have not puffed. 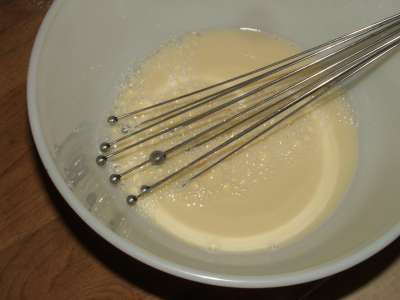 The other things that seem to be required are: 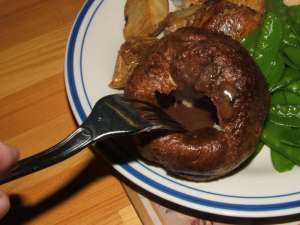 Popovers should be served immediately after coming out of the oven. With LOTS of gravy. Too much gravy. (Here, when the photo was taken, I hadn’t yet finished pouring in the orange gravy from roast chicken a l’orange.) 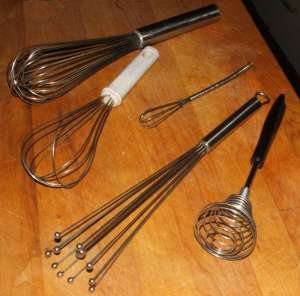 [The coil whisk] is now my favourite whisk for beating eggs! It’s light-weight, very fast and really easy to use. Not to mention that it’s a breeze to wash. Even without the aid of an electronic dishwasher…. I can’t wait to see how well it works for making popovers!

-me, “How many whisks does one kitchen need?”, blog from OUR kitchen

Ha! I only used it only for a second! It really doesn’t work in a big bowl. (It’s fantastic and still the best one for beating an egg in a pyrex cup measure.) The ball whisk and the broken whisk with the white handle are the best for whisking the egg for popovers. 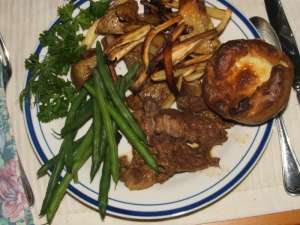