Okay. You’re right; it’s lame. But at least there were no bananas! I know how some of you loathe bananas. (You know who you are.)

So what’s up with the knock knock joke about oranges? Because this bread that Astrid chose for the BBB task for March calls for them! Well, orange zest, that is. To make it even more interesting (in a good way) there are also caraway, anise and poppy seeds added.

This is like no other rye bread I’ve had. It’s wonderfully soft in the crumb and the crust is beautifully chewy. But not so much that it will break anyone’s teeth. And the scent of the bread as it’s being mixed, kneaded, rising and baked. Wow!! Our house smelled like Christmas.

Oddly, even though the orange was very pronounced in the aroma, there is little hint of its flavour in the bread itself.

I made half the recipe and going against all precedent, I didn’t make any changes to the recipe. Yes, I even went out and bought aniseed to use instead of fennel seed that we always have on hand. Okay, okay, I made one change: I reduced the amount of yeast by a little.

Monday 12 March 14:56: We bought oranges yesterday so I could make the Swedish Rye this week. I’m trying to turn over a new leaf and actually read a recipe before going into the kitchen (wish me luck with that…).

Why oh why don’t writers say “til doubled” instead of giving times for rising? I’m guessing that Edward Espe Brown didn’t have a kitchen like ours – even if we put bread dough in the oven with only the light on and/or turn the oven on briefly to warm it up first, it takes WAY longer for it to rise than it does in cookbook writers’ kitchens.

Tuesday 14 March 11:04: I just finished mixing sandwich bread dough as per my instructions from T and realized that the deadline for the Swedish Rye is fast approaching.

Thank goodness that Astrid wrote out all the instructions! I’ve only made one recipe from that Tassajara Bread book and found it to be so confusing because of having to keep turning pages to go from one recipe to the next to find the instructions for each part of the bread (it turned into really delicious banana cinnamon buns).

No time like the present to make it! I checked again to make sure we had all the ingredients:

It’s a miracle! We had everything that was required. Fiddle-dee-dee about the lack of freezer space. I will just have to eat the resulting bread.

11:44: With all the ingredients out on the counter, I happily started zesting the orange. I LOVE the smell of orange zest!

3. Continue to beat until you have a smooth dough.
Again pull your spoon under the dough and bring it up to the surface again in a circular mode. The batter will be more elastic while you are doing this as more and more air gets incorporated.

Pull my spoon under the dough and bring it up to the surface? Oh dear.

Errrrmmm, I’m afraid I just beat round and round in a circle… (Heh. One of these days I’ll learn to read everything before I actually make the bread.)

13:21 I’m so excited to be using new flour that no additives except the vitamins that are required by Canadian law! I just discovered a supermarket way way way north of us (just past the 401) that sells Rogers flours, from a company in BC! I bought bags of their dark rye, 100% whole wheat and unbleached all-purpose flours, all of which are going into this bread.

Mixing in the oil, salt and rye flour was a breeze. I dumped it all in and happily stirred stirred stirred with my favourite wooden spoon. And then I read to make sure I’d done everything I was supposed to do.

5. Folding in the remaining ingredients. Do not stir! Do not cut through the dough, this will improve the elasticity and strength of the dough.
6. Sprinkle on the salt and pour on the oil. Stir around the side of the bowl working carefully your way towards the center. Rotate your bowl a little with every stroke you do. Repeat until all of the salt and oil is incorporated.
7. Sprinkle the flour 1/2 a cup at a time onto the dough. Again fold it in while rotating your bowl.

I decided to ignore that part and hope it would just go away.

9. Plop your dough on your kneading board and scrap all remainings from the bowl onto the dough. Keep in mind that your surface should be floured enough to prevent the dough from sticking to much on the board.

I made an executive decision and dumped the whole wheat flour onto the board. (No, wait, I lied. It wasn’t a decision at all. I just blindly threw the flour down.) But I got the “plop your dough” part right!!

Kneading was a pleasure after I stopped worrying that all of the whole wheat flour might not fit into the dough.

17:30: Ah, it must be spring at last!! The dough doubled in record time. In OUR kitchen! (I was worried that I might be baking this tomorrow.) And does it ever smell wonderful! I do love that orange zest.

As I was turning out dough, just before shaping, I began to freak out. Eeek, what are those orange worm-like things?!

Oh yah. Orange zest… Duh. (Hmmm, no wonder I can’t remember what I’ve read. I can’t even hold onto the fact that there is orange zest even as I’m commenting to myself how wonderful the aroma of orange zest is.

18:20: Initially, I was going to make two medium sized loaves. I divided the dough in two and shaped one piece. It looked small.

So I changed what’s left of my mind and amalgamated both pieces into one – with some difficulty because the two pieces were floured. Good thing that the instructions say to knead the dough a little before the final shaping. Shaping NOT my best. I covered up the errors the best I could by sprinkling it liberally with poppy seeds.

20:05: Miraculously, the loaf rose beautifully. And it just wanted to be slashed! 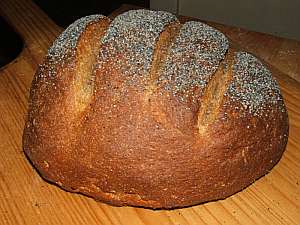 20:50: Still smells fabulous and LOOK AT THOSE SLASHES! Sure, it’s a little heavy but it’s rye bread. Oooh, I can’t wait to taste it!

My slashes worked!! And isn’t this bread beautiful? Thank you, Astrid!

1.) Lemon Juice: This is entirely optional. I could just as easily have added a bit of orange juice (if I hadn’t eaten the orange, that is.)

2.) Stirring the starter: Espe Brown suggests to beat by “stir[ring] up and down in a circular mode from the bottom of the bowl to the surface of the dough” and goes on to say to remember to “pull your spoon under the dough and bring it up to the surface again in a circular mode. The batter will be more elastic while you are doing this as more and more air gets incorporated.”

3.) Stirring in the rye flour, salt and oil: Espe Brown says to fold the rest of the ingredients into the starter and adds “Do not stir! Do not cut through the dough, this will improve the elasticity and strength of the dough. […] Stir around the side of the bowl working carefully your way towards the center. Rotate your bowl a little with every stroke you do. Repeat until all of the salt and oil is incorporated.”

4.) But I like warm bread!: If you wish to serve warm bread, reheat it after the loaf has cooled completely. To reheat UNsliced bread, turn the oven to 500F for 5 minutes or so. Turn the oven OFF. Put the bread in the hot oven for ten minutes.

I rewarded myself by eating two small slices: one with butter and the other with butter and T’s Seville orange marmalade for breakfast the next morning. No surprise, the bread is delicious!!

Did I mention that I LOVED the smell of the oranges when the bread was rising, baking and being sliced? But I’m amazed that the orange flavour isn’t really apparent in the taste. The other surprise is that the caraway and aniseed are very subtle as well. 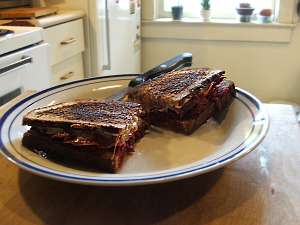 We had faux-Reubens for lunch: with ham, no-name mozzarella (basically medium white cheddar, there’s no way they stretch that cheese to make it) and grated raw beet/onion salad. The sandwiches were delicious! 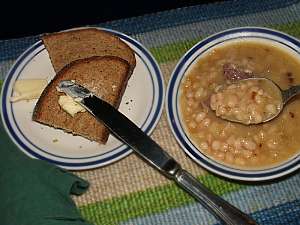 Then for dinner, we had ham-hock white bean soup (remind me to rave some more about that!) and rye bread and butter on the side. Finally, the flavour of the orange came through. What perfect bread to have with white bean soup.

Thank you, once again, Astrid! I love this bread!

For March I thought we’d go up a little north… We’ve been on the white bread and quick bread side lately so I wanted to go a bit darker, prolly a bit more healty and spicy too… It’s quite a while ago since we played with rye and whole wheat.

The following recipe is taken from the Tassajara Bread Book and is described there as “sweet-smelling and scented, a light bread suitable for sandwiches”

Sweet-smelling and scented it is indeed! Light too. Absolutely suitable for sandwiches. We do hope you’ll join us and make this bread as well.

To receive a Baking Buddy Badge to display on your site: bake Swedish Rye in the next couple of weeks and post about it (we love to see how your bread turned out AND hear what you think about it – what you didn’t like and/or what you liked) before the 29 March 2012. If you do not have a blog, no problem; you can also post your picture(s) to Flickr (or any other photo sharing site) and record your thoughts about the bread there. Please remember to email the Kitchen of the Month to say that your post is up.

Please take a look at the other BBBabes’ Swedish Rye:

We’re going through T’s Seville orange marmalade so quickly that we were most relieved last week to find Seville oranges still available at one of our favourite vegetable/fruit stores. This past weekend, T made MORE marmalade. edit 19 May 2012: When I read Google’s translation of Ágnes’ post about her Swedish Rye bread, I was reminded that I too reduced the amount of yeast in the recipe and neglected to say anything about it. Espy’s recipe calls for 2.25 tsp of active dry yeast for the amount of flour I used. I added only 1.75 tsp active dry yeast. It was plenty.