I love the Chef’s Showcase page in the Toronto Star’s weekly TV guide! 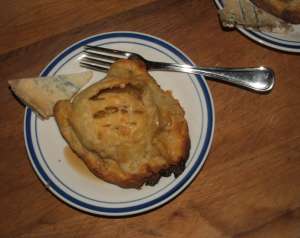 When you make apple pie, do you usually slice the apples after coring and peeling them? You do? Well, so did we. Until we tried Jason Barato’s recipe for apple crostata, published in the Toronto Star’s Chef’s Showcase.

For reasons known only to themselves, the Star has neglected to include this recipes in their archives. Silly them. It makes one of the best apple tarts we’ve ever had. And we’ve had a lot of apple tarts….

Of course, we didn’t follow the recipe exactly (and when I say “we”, you know I mean “he”). But it was pretty close.

And we also disregarded Barato’s advice to serve the tart with ice cream. Oh my no! Serve it with blue cheese, please. (One of us might have had ice cream but when he knew that we didn’t have any ice cream in the freezer.)

Here’s what we did to make the tart:

Serve warm. Drizzle the rest of the apple liquid over the hot tart and put slices of good quality blue cheese on each plate. (Barato suggests serving the tarts with ice cream instead of cheese.) 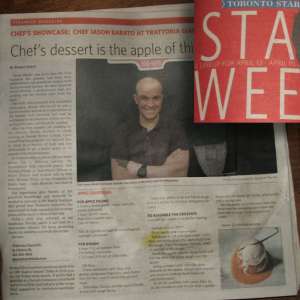 Remind me to get more apples. We still have a little blue cheese left. We neeeeeed to have apple tarts with it. 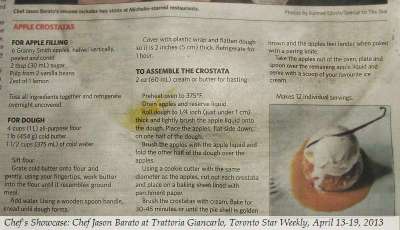 2 responses to “Our take on Giancarlo Trattoria’s Apple Crostatas”