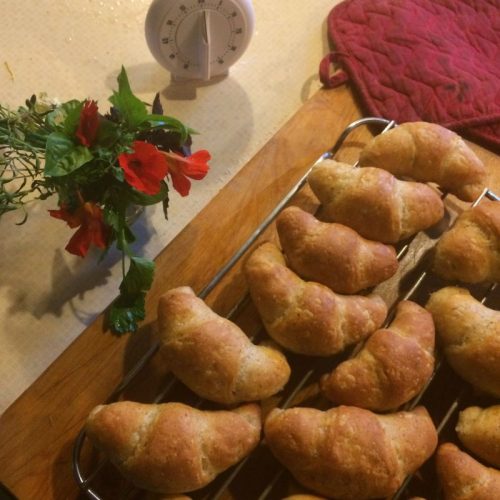 This month, Kelly decided we needed (ha, I almost typed “kneaded”) more butter in our diets. She decided to make laminated dough. But, because it’s summer, she also wanted to make our life easier by choosing an easy laminated dough recipe. Yay, Kelly!

END_OF_DOCUMENT_TOKEN_TO_BE_REPLACED 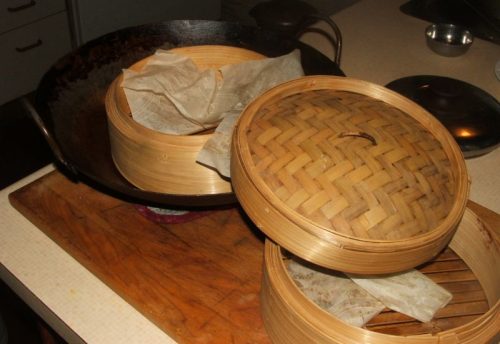 steamed-up ADJECTIVE – INFORMAL
1. angry or upset about something
– Macmillan Dictionary

But I’m getting ahead of myself. Let’s start at the beginning, shall we?

At first I was a little nervous. I do like dumplings, but I’m not the biggest fan of steamed buns. Still, they sounded SO good!

[Chinese] steamed buns […] are the paler, softer, and squishier sibling to baked milk bread buns. Were you one of those kids who preferred their peanut butter and jelly sandwich with the crusts trimmed off? Maybe the crusts had a little too much “texture” for your six-year-old palate. If you were that kid (I sure was), then steamed buns are definitely for you. Even if you weren’t that kid, you’ll still love these squishiest of squishy buns. Because they are cooked with steam, the exterior of the dough doesn’t form a crust — the entire bun stays soft throughout.

END_OF_DOCUMENT_TOKEN_TO_BE_REPLACED

For this month’s BBBabes’ project, Cathy (Bread Experience) chose pan Gallego, a rustic-looking bread from Spain – specifically Galicia. The bread we made has the coolest-looking topknot on it. 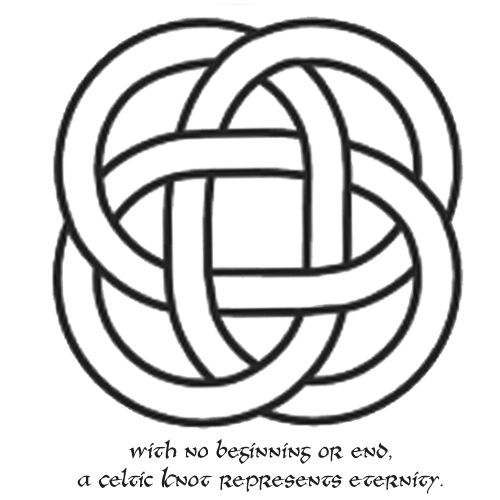 At first I thought the knot was supposed to be a Celtic knot, because Galicia was originally a Celtic settlement. A Celtic knot is one that has no beginning or end, to represent eternity. Which makes complete sense for bread, don’t you think? What with bread being “the staff of life”….

But the dough for pan Gallego is rather slack; it is not exactly easy to create an intricate knot with it. 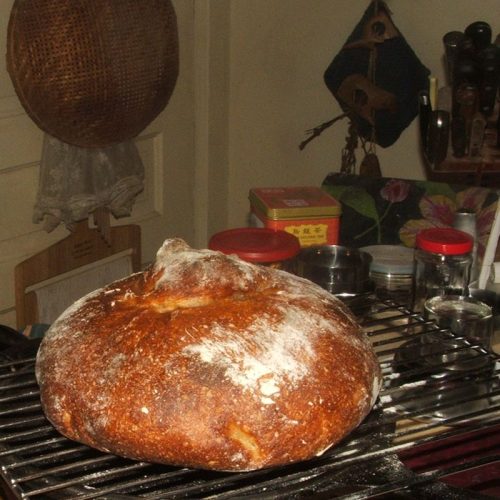 END_OF_DOCUMENT_TOKEN_TO_BE_REPLACED

of butter; this recipe is a keeper; A Cautionary Tale by Anton Chekhov about blini; a Bread Baking Babes (BBB) project; list of some of the international relief agencies addressing the Ukraine crisis

When I chose this recipe, there was only the smallest hint that a megalomaniac would actually go through with his dastardly plan to invade Ukraine. So while blinis are commonly associated with Russia, I like to think of this ancient pancake as Slavic.

Blini are called Mlyntsi in Ukraine. 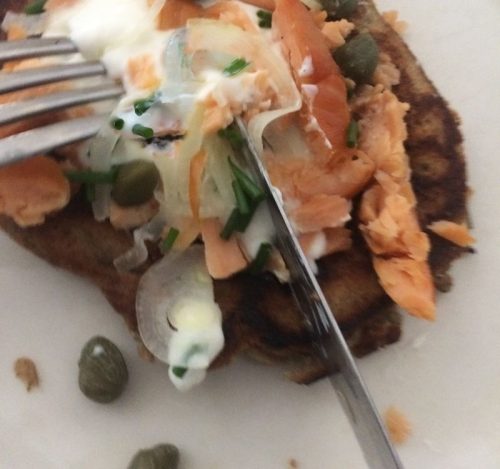 Since cancelling our subscriptionin 2015, we have been reading back-issues of SAVEUR magazine – from when SAVEUR was still dedicated to presenting lovely photos and beautifully written, detailed articles. The recipes included often seemed secondary. But not always….

In November 2001 issue, Darra Goldstein wrote about caviar. Amazingly, she did not wax lyrical on blini, aside from simply mentioning them, but she did include her blini recipe. It is a yeasted pancake recipe! It is by no means a secondary item in the article.

Possibly because it’s her book and she wasn’t confined by SAVEUR editors, Darra Goldstein does give a lot of detail about blini in her book “A Taste of Russia”. 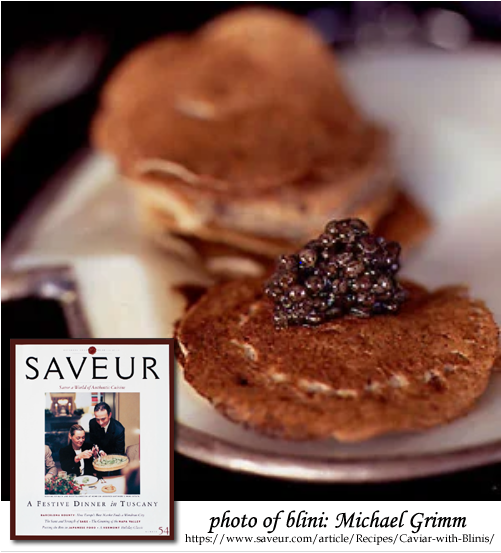 The sturgeon’s glistening “black pearls”, whether spread gently on blini or piled on a piece of toast or eaten straight from a mother-of-pearl spoon — each egg popping delicately, and deliciously, in the mouth — have long been the stuff of legend and love, mystery and romance.

– Darra Goldstein, Caviar Dreams, SAVEUR No.54 (November 2001), p.86 (the article includes Darra Goldstein’s recipe for blini, but with some of her instructions missing)
Now an international favorite, blini are one of the oldest Slavic foods, dating back to the heathen tribes that worshipped the sun and created pancakes in its image. These earliest pancakes were called mliny, from the verb molot’ (“to grind”), and the word is still preserved in the Ukrainian, Serbian and Croatian tongues. Light and porous, blini are designed to soak up lots of butter.

This winter has been particularly cold and icy. And while the Spring Solstice is now long past – way back on 20 March, and Butter Week (marking the week before the 40 days of Lent) too is so long ago that tomorrow is Easter, it still seems fitting for us to celebrate the promise of warm weather in the northern hemisphere at last – let us not speak of the recent blizzard on the prairies….

If only we could also celebrate the coming of peace in the region where blini are traditionally made!

END_OF_DOCUMENT_TOKEN_TO_BE_REPLACED 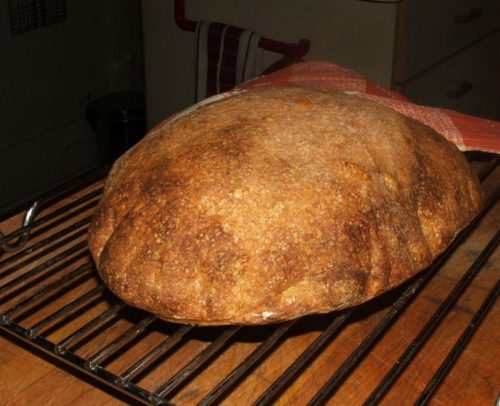 A week or so ago, after each of us presented our March project of Pan de Cristal in the BBBabes’ FB group, someone asked how much vital wheat gluten was necessary to turn all purpose flour into strong bread flour.

My arm immediately went up and I waved my hand frantically. I know the answer!! Pick me! Pick me!!

My rule of thumb is to replace around 3% (by weight) of the all purpose with vital wheat gluten.

But. After answering, I realized that I had not paid any attention at all when I made my own Pan de Cristal. Duh. I hadn’t added nearly enough vital wheat gluten! I had added only 1%! Hmmmm. Maybe that‘s why my Pan de Cristal wasn’t an entire success. END_OF_DOCUMENT_TOKEN_TO_BE_REPLACED