summary: recipe for chili sauce made with fresh cayenne chilis, garlic and chicken schmaltz; information about Pandan leaf (click on image for larger view of pandan and red cayennes) 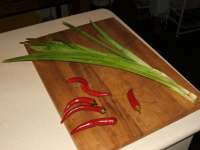 Yesterday, we decided it was the perfect day to make Stephanie’s (Mana Makan) Rice Cooker Chicken Rice. But we didn’t have chicken, cayenne chillies or pandan leaf. In fact, we didn’t really know much about pandan leaf except from the photos and description on Stephanie’s page and from searching the internet.

After reading the following phrase on the Asia Food Glossary – Pandanus Leaf (asiafood.org/glossary_1.cfm?alpha=P&wordid=3294): The flavour is delicate, and as important to Asians as vanilla is to Westerners, we felt sure that we would find it easily and that it would be everywhere. We’d pick up chicken and red cayenne at the same time.

So we jumped on our bikes and headed towards Chinatown and Kensington Market. As it happened, pandan leaf wasn’t everywhere but we did find some tightly wrapped in cellophane at one of the big Asian supermarkets. Naturally, there was no English writing on the label. We couldn’t smell it but were pretty sure it was the right thing. An elderly Chinese gentleman looked at it and said he’d never used it. A Vietnamese lady looked at it and said yes, that was it. She said it was used in cooking sweets. We said we were using it for chicken. She looked astonished and said in a friendly but emphatic tone, “No. Never!! Only sweets.” Still we were certain that this was what Stephanie had used so we got it.

We stopped at our favourite chicken store, ‘St. Andrew’s Poultry’ and got a lovely looking fresh chicken. But as for the red cayennes… well!! You would not believe the difficulty we had finding those!! There were habaneros, green Thai chillies, green jalapenos, yellow banana peppers, sweet red peppers galore. But no cayennes! We traipsed from vegetable store to vegetable store, knowing that we could easily substitute with Thai chillies but we had bees in our bonnets and wanted cayennes. Besides, it was a lovely day, so riding our bikes from neighbourhood to neighbourhood was hardly a chore.

As the afternoon wore on though, we realized that we would have to give up. We wound our way towards home, stopping at the Korean Supermarket. They had red cayennes!! At an astronomical price! Forget that.

We knew that a nearby Indian grocery store invariably has cayennes. They did indeed have some but they were miserable looking things. Instead of being red, they were green. Two strikes against them.

So, pretty much defeated, we headed towards home. Just before our house, there is a large “no frills” supermarket. On an offchance, we stopped in. And there they were. Beautiful, reasonably priced red cayennes at last.

And Stephanie’s chicken? Yes, indeed, we made it – but without the rice cooker! Stay tuned to hear about the fabulous result.

(click on image for larger view of chillie sauce) 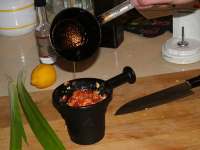 Here is just a taste – the truly amazing chillie sauce! We will definitely be making this again. It’s fantastic. Thank you, Stephanie!

Here is our take on her recipe:

Serve with rice. Garnish with coriander leaf if you have it.

(click on image for larger view of of chillie sauce) 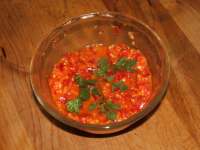 Next time, we’ll probably just heat olive oil and use that instead. I’m not positive that the chicken fat added a lot of flavour (although I could be wrong!!)

I can’t wait until our cayenne plant starts to yield peppers so we won’t have to go through that nightmare search again! Because now, of course, we neeeeeeeeeeeed Stephanie’s chillie sauce! We finished all of last night’s already….