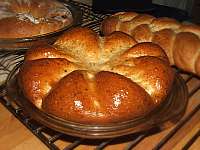 Thank goodness!! The BBBabes decided to use flour again. This month’s bread is “Sweet Portuguese Bread: Massa Sovada”. When the recipe was announced, I emailed the following to the others:

Now that the flurry of excitement from sprouting wheat is starting to abate, I'm starting to think about August's bread. I'm really looking forward to it. And this time, I'm determined that I'm going to read the recipe through BEFORE starting.

But I kept putting it off. Imagining that the disgusting muggy buggy weather wouldn’t last. Couldn’t last. I THOUGHT we were over the worst of it and it rolled right back in late Saturday night around 10:00pm. Just as I was mixing the sponge.

Of course I forgot about my vow to read the recipe through. (Are you surprised?)

I immediately got stuck at “osmotolerant yeast”. Osmotolerant yeast? Pfuuy. Over the past month, I did look for it on our supermarket shelves. And I learned from Susan (Wild Yeast) that regular yeast could be substituted for osmotolerant by adding 30% more. But I had a major brain failure (I think it melted in the heat) and couldn’t seem to figure out how to calculate 30% more yeast. I’m pretty sure it would mean 30% of 7gm, to use 9gm active dry yeast in substitution for 7gm osmotolerant yeast.

And then I forgot about it. And decided to just use regular old active dry. And then, sweltering in the kitchen, surrounded by dinner dishes, in the flurry of mixing the starter after a spectacular feast in the garden, I forgot that 7gm is about 2¼ tsp active dry yeast. (I was too lazy to measure the yeast with the scale. Even though I had the scale out….) I carefully measured out 2½ tsp (about 8gm). So I guess I inadvertently made somewhat of a yeast adjustment….

And the next morning things hadn’t really improved. There I was, early because I imagined that if I got up early, it wouldn’t be so warm in the kitchen (ding ding ding ding WRONG!!!), weighing flour and starting mixing things together, dripping – it was already a very warm and humid 24C at 7:00am, having dropped to a cool *cough* 23C for an hour just around sunup but 25C for most of the night outdoors.

I made an executive decision that 3 eggs were just too many. And added only 2, making up for the extra liquid by adding a quarter cup more milk.

And there in the semi-dark, dressed in loose cotton clothes, hair frizzed out in the humidity, I happily creamed sugar into butter, beat in eggs and then beat some of the flour in. I was thrilled at seeing the gluten strands begin to form. (For a few moments, I even forgot how hot it was.)

I then added the rest of the flour to “make a stiff dough”. 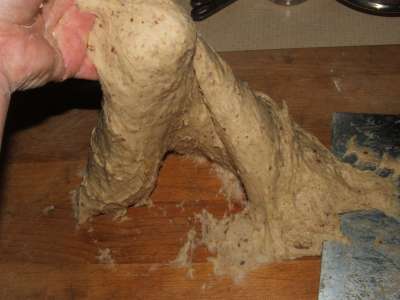 What??!! This is NOT my definition of stiff at all. (Suddenly I remembered how hot it was. :stomp:)

So I kneaded in a tiny bit more flour. Wheeee!!! Isn’t it fun following directions?

I did add a little more flour while kneading. But not much because the dough seemed so nice.

It was all because of seeing the following in the recipe:

Of COURSE, I didn’t read further (until the bread was rising) to see:

Dough should be smooth, soft and very supple with a slight stickiness

But all was not lost. Keeping with the tradition of not reading, I decided to leave things as they were and not add any more flour to create a “stiff” dough. And what I ended up with was really beautiful and had already almost doubled after only an hour.

Causing the immediate thought, “Oh my. This is going to make a lot of bread, isn’t it? I think maybe our neighbours are going to love us because we won’t have room in the freezer for all the loaves.”

And I oozed out of the kitchen to wait the few moments it would take for the dough to almost triple, wondering if maybe this WASN’T the right year for us to decide to leave our air conditioner turned off.

And speaking of following directions…

For best demarcation of indents be careful to dust dough ball well with flour.

Did I notice that part BEFORE I made the indentations??

Ha. Of course not. 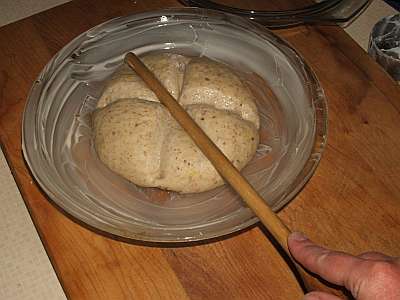 At first I thought that the little rolling pin we have for Indian bread would be perfect for the scoring. But when looking at it and the size of the loaf, I changed what’s left of my mind and decided to use the handle of a wooden spoon. Looking at the shaped round, I thought, “Hmmm, looks like the handle will stick.”

So I floured the spoon handle.

It worked pretty well. For one indentation. And stuck like crazy for the next one. But then I thought… water!!! Use water!!! So I wet the spoon handle. That worked even better. Or seemed to anyway.

And then I was looking at the size of pie plate and thought, “Looks awfully large for that size of loaf….” So I buttered the lid of a small casserole dish and then buttered my hands and lifted the flacid thing from pie plate to casserole lid. And pushed the demarcations in again just to be sure they’d take. *cough*

Not wanting to waste the buttered pie plate, I flattened a third of the dough to make a jamroll bread ring and put it in there. (I’ll drone on about that in another post.) I then divided the third piece of dough into three and braided it.

It was so ridiculously hot here that the bread took no time to rise. (My desk thermometer said 31C.)

The sacrifices I make to be on-time for posting.

Here’s the recipe we were to have followed.

And here is what I did:

Allow to cool completely (it’s still baking when it’s hot out of the oven).

1. The whey came from draining some plain yoghurt through a cheesecloth to make yoghurt cheese to go with grape pie (remind me to rave about the grape pie!!) If whey is unavailable, use water. Tanna says that water from boiling potatoes is also very good. Tanna wrote “potato water or whey really make it extra tender & soft”. In the starter, use a total of 114gm (~½ c) liquid.

2. Tap water is fine to use – just make sure that it has stood for at least 12 hours so that the chlorine has dissipated. Under no circumstances should you use water from the hot water tap. Of course, saying that it is unsafe to use water from the hot water tap might be an urban myth, but why tempt fate? Heat the water in a kettle or microwave and add cold water until it is the correct temperature, (use the baby bottle test on the back of your wrist – your fingers have no idea of temperature!) Or you can use a thermometer. The temperature should be BELOW 120F because yeast begins to die when the temperature is higher than 120F.

3. I used 4 Tbsp of unsalted butter and 2 Tbsp salted butter. I thought the amount of salt in the bread was perfect. T thought it could use more salt. (I think he has lost a LOT of salt because of this insane heat…. :stomp:)

4. Tanna called for 30 to 100 gm brown sugar. We always use demerara sugar but when I was growing up, we always used “soft golden sugar” when a recipe called for brown sugar. When I made the bread, I didn’t want an overly sweet bread so struck a compromise and added 50gm. Next time, I think I’ll add a little more, perhaps as much as 80gm.

5. Instead of using actual milk, I whisked ¼ c powdered skim milk into the water.

6. Do you want warm bread? If you wish to serve warm bread, reheat it after the loaf has cooled completely. To reheat UNsliced bread, turn the oven to 500F for 5 minutes or so. Turn the oven OFF. Put the bread in the hot oven for ten minutes. 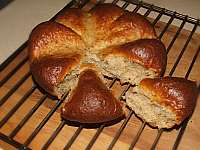 When I first put in the demarcations, I really went nuts, pressing RIGHT down to the bottom of the shaped loaf almost severing it. As Karen (Bake My Day) said, it was like an air mattress. Two indentations worked. But adding a third and the whole thing just popped right up again. And if I hadn’t redefined the lines (and deflated the loaf) mine would have looked like an overinflated air mattress after being baked. Perhaps there’s a reason that the traditional shape for this bread is apparently a simple round.

But who really cares about marks or no marks? The flavour, crust and crumb are great. Thank you, Tanna, for a delicious new bread recipe!

The only thing I miss is the taste of the lemon zest. I put in the zest of one (large) lemon and there isn’t even a hint of lemon flavour.

Remember that I said that we were going to donate some of this bread to our neighbours? Errrrmmmm. Sorry neighbours. I’m afraid we might have to eat all of it ourselves.

Tanna (My Kitchen in Half Cups) is the host of the August 2010’s Bread Baking Babes’ task. She wrote:

I have a wonderful Portuguese neighbor who grew up in the Azores in the 50s. As she told us about her mother one evening, she told us about this wonderful just sweet bread her mother used to make and how much she loved this bread. She still can get the bread but only once a year when she’s with her sister. So … I set out to replicate the bread for her. […] My neighbor’s favorite way to eat this is with a touch of really good unsalted butter.

If you’d like to bake along (of course you do!!) and receive a Baking Buddy Badge to display on your site, bake the Sweet Portuguese Bread and post it before the 29 August 2010.

Please remember that the BBBabes’ anniversary is coming up in February. We’d like you to pick the Anniversary Bread recipe for February 2011. You have until November to think about it.

Scour your bread-baking cookbooks, recipe boxes and bread-baking sites to make your choice. We’ll ask you to submit your desired recipe in November. And in December, after we’ve narrowed the list down to a manageable number of choices, we’ll ask you to vote on one for us to bake and post for our anniversary in February.

(By the way. Yes, I did learn my lesson from last time; I used the coffee spice grinder rather than pestle and mortar to grind the flax seed.)