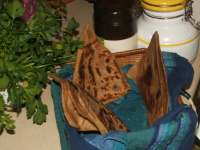 We recently read about parathas in Mangoes and Curry Leaves by Jeffery Alford and Naomi Duguid. And then T got that far away look as he reminisced about the best parathas he ever had while trekking in the Himalayas. Ever since, I wanted to make parathas.

And yesterday, I decided to go ahead. Initially, I was going to make stuffed parathas but T nixed that. He said he’d never had a stuffed paratha that was crispy and he wanted crispy parathas.

I made the dough and when it came time to cook the paratha, we headed into the kitchen together. Here is how things went just after I turned out the dough and divided it into 6 pieces:

Me: It’s all whole wheat flour.

T (disapproving tone): All wholewheat? You never do that with chapatis. It’s always half and half, whole wheat and white!

Me: Jaffrey says to use all whole wheat flour.

Well… this wasn’t going very well so far. But things started looking up once the first paratha was cooked. T brightened noticeably. And pointed out that they were way easier to make than chapatis because there was no need to puff them over the bare element. 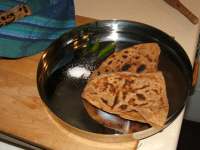 And once they were all ready, we sat down to try them by tearing off a bit, dipping in salt and taking a nibble of green chili. The bread was light and crispy. The butter had taken on a slightly smoky quality. The chili lent a lovely freshness. The salt balanced the chili and the butter. Really wonderful.

And joy of joys!! T’s eyes glazed over and he murmured through a mouthful, This is as good as I’ve ever had.

And really, they were fabulous. We’ll definitely be having these again soon!

Here is the recipe:

Serve with green chillies and sea salt. Garnish with coriander leaves if you want.

They are also good with any vegetable curry or dahl.

Afterwards, I asked if I should use half white and half whole wheat flours the next time and was told categorically, no. Apparently, they were exactly as they should be. In fact, they were pretty much exactly as the Himalayan paratha had been.

Don’t you love it when things go exactly right?

edit: We made Aloo Paratha

4 responses to “Paratha: easier than chapatis!”