summary: Pasta with Bacon, Potatoes and Provolone based on a recipe by Lidia Bastianich; memories of Spaghetti Amatriciana; (click on image(s) to see larger views and more photos) 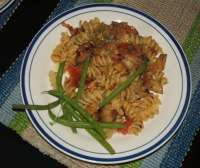 The other day, one of our friends was raving about the dinner he had made the night before and how his boys had loved it. It was a rich but delicious pasta dish, calling for bacon, cheese and potatoes.

Pasta? Bacon? Cheese? Potatoes? Of course, I asked him to tell me more.

The dish came from watching Lidia Bastianich on PBS that weekend:

The 200-year old L’Europeo, where I sampled pizza is also a restaurant and it has the most delicious rendition of a favorite Neapolitan dish-pasta, patate e provola. You can probably translate this yourself: Pasta, Potatoes and Provola Cheese-the kind of cheese we usually call provolone. All varieties of provola (there are many) are pulled-curd cheeses, like mozzarella, but after they are formed into pear shapes, they are hung to dry, and sometimes smoked. As they do with pizza, Neapolitans have strong opinions on what makes a good dish of pasta, patate e provola. As prepared by Bruno di Rosa’s mother Rita, It is considered a soup and eaten with a spoon. At L’Europeao it was definitely a pasta, dense and cheesy and full of flavor-with all the comforts of baked macaroni and cheese.

We had to try it! T jumped on his bike and pedalled furiously to get to the grocery store in time to buy a couple of plum tomatoes and some Provolone. Expensive already-sliced UNsmoked Provolone in a fancy flat package. Why is that the only way we can buy it??

I really hate that there has clearly been a demographic study to tell the supermarket owners that our neighbourhood is uninterested in buying interesting cheeses. But enough griping. Let me get back to the pasta. 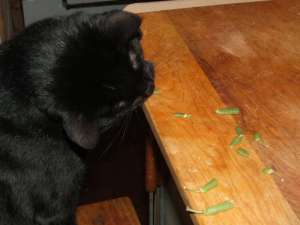 When T got home, he immediately headed into the kitchen to start cooking potatoes, onions and bacon. Then we cut green beans and put pasta water on to boil. Of course, the green bean thief was at work again!

Even though the ditalini (thimbles) suggested by Lidia would have been fun, we decided to use the rotini we had on hand already. In no time, dinner was ready.

Sure, it doesn’t look all that amazing. But did it ever smell fabulous!

Instead of sprinkling on grated Parmesan, as Lidia suggests, we decided to garnish with sprouts from our garden and toasted bread crumbs.

Did I take a photo of the dish with the bread crumbs? Of course not!

I don’t know if dinnertime is similar at your house, but at our house, once it’s served, there is a major push to put the camera away, – it’s getting cold! – and sit down!

We served the pasta with steamed green beans and glasses of Sangiovese. Next time, we’re thinking it might be nice to add some green peas to the dish. Also, a big salad of mixed leafy greens would be the perfect addition. With a simple vinaigrette.

And there will be a next time! This pasta dish is a keeper!

This pasta reminds me of what used to be my absolute favourite pasta. It’s a dish that I made often and is, in fact, one of the very first dinner that I cooked for T when we were first dating.

It was from a recipe for Spaghetti Amatraciana in Umberto’s Pasta Book (Whitecap 1985) by Vancouver restauranteur Umberto Menghi.

It wasn’t until after we were married that I even had the slightest inkling that he had struggled so through that dinner. Happily for me, T now adores pasta. He even likes tomato sauce.

Bacon solves a lot of problems, doesn’t it?

Hmmmm, is it time for Spaghettini Amatraciana soon? 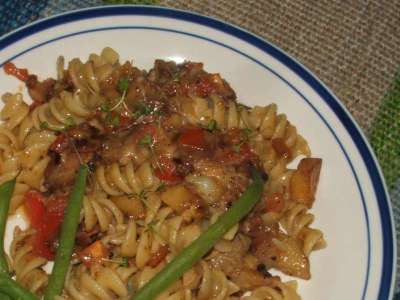 3 responses to “Pasta with Bacon, Potatoes and Provolone”