Once again, just under the wire! Wait! What am I saying?? It’s early!! It’s not even close to midnight!

Just before leaving for our holiday, we noticed that our wonderful Polish butcher sells jars of a solid white substance in his refrigerator. We held up a jar and asked if the Polish girl behind the counter (PGBC) if it was lard.

Admittedly, I’ve never been a fan of pastry made with lard (can’t stand that gummy taste on the roof of my mouth when the pastry is cold). I’ve always insisted on using vegetable shortening. But of course, what with hearing more and more about the evils of transfats, we decided we had to try making a pie with lard when we got home. 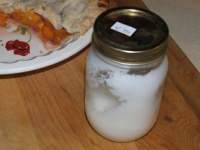 Yes, yes, we know that lard is not necessarily all that good for us either. But at least it’s honest about itself! And our butcher’s lard in a clean jar must be superior to commercially produced lard, full of preservatives, housed in a greasy box that has been sitting on a supermarket shelf for who knows how long. The jarred lard must be refrigerated – it’s quite soft at room temperature. It just has to be better than the over-processed boxes of commercial lard filled with preservatives!

What kind of pie, you ask? Well, there really is only one kind of pie at this time of year, don’t you think? Peach, of course!

<rant>Now the difficulty with getting good peaches for pie is that for some bizarre reason, Ontarians seem to be perfectly willing to allow growers to pick produce when it’s lime green rather than waiting for it to ripen on the tree or vine. WHAT is with that??! It’s not as if they have to travel very far with the goods. The orchards and farms are not more than an hour away. The roads are not in such terrible shape that the ride is that bumpy. And even if you go to a roadside stall out in the country, everything at the stand will be green and hard! And the stall keeper will proudly tell you that everything was picked that morning!! Ask the person why and you will be met with a quizzical uncomprehending stare. How can we stop them from continuing with this ridiculous tradition?!</rant>

Okay, do excuse me; I’ll stop foaming now… where was I? Oh, yes, the peaches. A couple of years ago, we discovered that if we can find fruit sold in a basket, it is more likely to have been allowed to ripen further.

And then as we rode by one store, we saw wasps galore, mostly hovering over the grape and peach baskets. We jumped off our bikes and carefully, carefully, brushed the wasps aside to pick up a peach. Even as we were brushing the wasps away, we could smell all the peaches. And they were in the shade! The peaches were soft, but not too soft, and a lovely reddish gold colour and yes, they smelled intensely of peaches!! The basket wasn’t cheap – $6 as I recall – but we decided we were worth it and bought a basket.

After T made the pastry, we blanched the peaches to peel them. It’s SO much easier to peel ripe peaches! The skin just fell away. We sliced them into a bowl, and yes, we had to cut away a few bruises.

We were driving along the highway coming back from [Niagara-on-the-Lake] when we passed a Fruit Stand. There were peaches that I think had just come off the tree. We stood and each ate a peach. I should say we bent over the ground with our chins out as the juice dripped down onto the dusty ground. That peach was the pinnacle of peach eating. As my sister was finishing her peach, I walked around the fruit stand to find a bucket of about 15 or so almost over ripe peaches labelled as “jam peaches”. The cost was a dollar or two. We took them home and made the most amazing peach pie – no jam for us!. Oh, my goodness – what a memory :bravo:. Every peach I eat is compared to that peach from about 15 years ago. 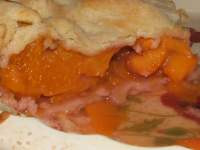 Yes, indeed, that long ago peach pie was unbelievably good. The peaches came through on their promise. And the pastry? The pastry!!! It is brilliant! It was light and crisp and flaky when it was warm. And the next night, when we had cold pie, there was not even a hint of gumminess at all! Why oh why didn’t someone tell me before that there was lard in that there butcher’s refrigerator?! Forget about boxed lard from the supermarket. Go directly to your butcher for lard. Do not pass Go. Do not collect $200.

Trust me. You’ll love it!

And speaking of local produce, there seems to be no end to the bounty. We have been having the most wonderful corn on the cob! (Happily, corn doesn’t seem to be picked ridiculously green) And today, as we bicycled through Kensington Market, we saw that there were Ontario grown hot red shepherd peppers. These too always appear to have been vine ripened. They aren’t terrible hot (perhaps a 3/10) but they are wonderfully sweet. If you’re in the area, race over to Augusta Avenue to get some! These peppers only appear for a short time in September. They’re fabulous added to tomato sauce.

La Festa al Fresco is the blog world’s biggest patio party. […] [P]repare any dish you like. […] The only rule is that it must feature a fresh, seasonal ingredient, preferably something that grows in your neck of the woods.

Lis and I are polishing the patio and tables as we speak. Tutti a tavola for La Festa al Fresco 2007!

For more information about how to participate, please see

Ivonne and Lis have asked for a 100×100 pixel image to use in the roundup. I hope this will do.