summary: picking pears; ideas for what to do with pears; stuffed pattypan squash; a surprise drawing of my pear bread; information about Two For Tuesdays! (real food) and Not far from the Tree; (click on image to see larger view and more photos) 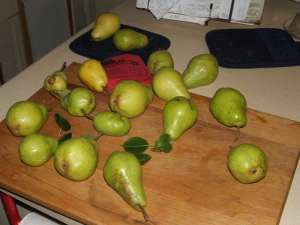 Today, I had planned to rave about the two fabulous salsas we made recently – one with tomatillos and one with corn. But that will have to wait. Because yesterday, I went pear picking.

Beautiful beautiful pears!! Bartlett pears. Clustered on the branches of a tall tall tree and scattered all over the ground beneath the tree.

How did this come about? I recently signed up as a volunteer picker for “Not Far From the Tree” *.

And so six of us gathered in a backyard not far from here and began by picking up all the windfall fruit from the ground. A lot of windfall fruit!! Bruised, half squashed, ant ridden windfall into the compost.

And then, with the help of ladders and poles with little baskets on top, we picked pears for about two hours. When we couldn’t reach any more ripe pears, we divided the harvest between the pickers and the community organization chosen to make good use of the fresh fruit.

And we looked up at the tree and saw zillions more pears high up in the branches!!

As I bundled my share of the pears into my bike, I noticed that one of them had already been broken in one spot. So I rinsed the pear off with water, pulled out a knife to pare away the blemish (wheeee!!! Too bad it wasn’t a pair of pears that I was paring) and we all shared the pear. Beautiful, firm but not too firm, sweet but not too sweet, juicy but not too juicy fresh pear!

And then we all said goodbye and headed off in our various directions.

When I got home, I put all the pears in a basket. And thought, what am I going to do with all these pears?! 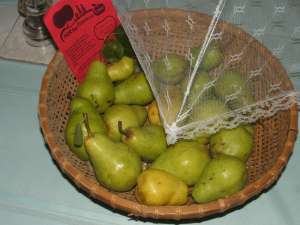 When I knew I would be pear picking, I had planned to oven-dry some of them. But the disgusting heat has returned and there’s no way we’re turning the oven on for several hours to dry pear slices! (Hmmm, is it time for us to get a dehydrator?)

One of my friends suggested Bittersweet Chocolate and Roasted Pear Tarts, which does sound divine. Not only would that require the oven to be turned on, but I was wanting something savoury.

I went onto the internet to get some ideas and found savoury pear recipes galore. Here, in alphabetical order are the ones that really caught my eye:

I couldn’t help noticing these sweet ideas too:

Alas, I don’t think we have the necessary equipment for this:

And then I thought about the above ideas and what we already had on hand: a pattypan squash, some red stemmed kale, beets, onions, carrots, celery, a little left-over baba ganoush, blue cheese, walnuts, pears galore.

Even though I’ve never had a pattypan squash before. This one was given to us by our neighbour who had way too much in her CSA box this week and generously gave the extra to us: an eggplant (hence the baba ganoush), the kale and the squash that was about 4 inches in diameter. It’s so cute!

I heated a frying pan, then added olive oil. I threw in some mustard seeds and chili flakes and while those were sizzling, I quickly sliced a half an onion. Thinly sliced. Into the pan went the onions. Followed very quickly by the walnuts (head slap! those should have gone in before!)

I chopped the kale coarsely and cut a slightly unripe pear into medium slices. (The reason I used that particular pear was because it had a suspect mark on the skin. It turned out to be completely fine. It was perhaps a little unripe but there it is.) I threw the pear into the pan and stirred it around a little. Then added the kale.

Hmmm… how to hold the colour on the kale? I didn’t want to put in cider vinegar this time. So I tossed in a bit of dry sherry. No idea if sherry will serve the same purpose but it can’t be a bad addition, can it?

Then I stirred in some fresh silver thyme leaves just harvested from the garden.

At that point, I cut the top off the cute little squash and started pulling out the seeds, thought it looked a little soft, tasted it and… hey!! I didn’t expect it to be like zucchini!! It has a sweeter and lighter flavour than zucchini though.

Does everyone actually remove the seeds? (I did but I tasted one and it seemed quite fine.)

I put some of the kale/pear/etc. mix in the cavity, spooned in some leftover baba ganoush (sp???? smoked eggplant, tahini, garlic galore) added some more kale/pear/etc. then topped it with some blue cheese and put the hat back on.

There was still tons of “stuffing” left. No worries. We’d have it on the side.

And into the toaster oven went the squash to baked at a medium temperature for about 40 minutes.

Oh yes, and one more thing. Did I mention that T said he was entirely uninterested in even tasting this little squash and wanted nothing to do with it? When I reported that I thought it was going to be really great and he said, “Oooh! Maybe I could have some.” Hmmmmm. Should I have let him?

In the end, of course, I did. And the result?

Now I’m thinking that with pattypan squashes, if I ever bother to get another pattypan squash, it would be better to stuff them with something a little more neutral. Maybe beet greens or spinach, toasted pine nuts and mushrooms with a little brie and tarragon.

I also think it might be a mistake to cook pattypan squashes at all. The squash tasted WAY better when it was raw – a little sweet (but not in a sugary way). After it was cooked, it was just watery with a hint of bitterness – from the skin?? from the few seeds that I hadn’t managed to remove???

I hope you don’t imagine that we took a photo of the squash, either before or after being stuffed. How could we? The camera was upstairs and it was just too too hot to go and get it. Or something like that.

This event was created by Alex (A Moderate Life) with the idea that each “Two for Tuesday” post would contain two things (two recipes, two links, two variations on a theme… as long as the post is about real food. Alex, Heather (girlichef) and two other bloggers have joined forces to co-host this week. Heather wrote:

-Heather, Girlichef: where all roads lead to the kitchen

“Not Far From the Tree” is a Toronto organization that includes a residential fruit-picking program to pick fruit (with permission, of course) that would otherwise go to waste. NFFtT have also been instrumental in planting Toronto’s first community orchard in a public park near Eglinton West subway station.

For more information on how you can donate your time and/or share your fruit, please go to

I think I mentioned that some of the pears we picked weren’t quite ripe yet. Onto the internet to find out how best to ripen pears…. (Isn’t the internet wonderful?)

How to Store or Ripen Pears

– All About Pears, bettycrocker.com

And speaking of pears, look what Lisa Orgler drew! The drawing is part of her “Lunch Box Project” and this one was inspired by my post on pear bread. How cool is that?!