summary: recipe for penne with fried peppers and bread crumbs, based on a recipe in the article “In Deepest Italy” by Francine Prose in SAVEUR magazine, issue #120; information about Presto Pasta Nights (PPN); (click on image to see larger views and more photos) 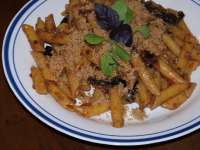 Way back in June, when I posted about Shrimps in Pernod on Spaghettini (read more about that here), I promised to rave about this pasta with sauce made from dried peppers that we had just tried. I think I even promised that it would be the next post. But knowing me and my stellar posting schedule, I didn’t really think I’d manage to get it published until August – even though most of the post was written and the photographs were long out of the camera.

August? Not a chance!! Clearly, I do not know myself at all. Here it is the end of October and I’m just getting to it. But thinking about it, this is perfect timing. Dried peppers should be easy to find right now. And this pasta dish is perfect for cooler weather.

And. It’s THE most fabulous pasta dish we’ve had for a while. Oh my.

It’s been almost three years since I first went to Matera [in Basilicata] and fell in love with a pepper. Not just any pepper, but the peperone di Senise, a sweet Italian red pepper with the complicated, smoked-caramel tang of a mild red Mexican chile. […] People dry the peppers on strings, like ancho chiles. Then they fry them until they’re crunchy with a crisp and salty pop, and add them to pasta along with handfuls of pan-fried bread. […] I tasted the pasta with peperoni cruschi in a Matera restaurant […]. The dish brought tears of joy to my eyes. I ordered it at lunch and dinner every day during that visit, and, for my last meal […], I asked the waiter to forget the pasta and bread crumbs and just bring me a plate of those crunchy, oily, salty, fabulous peppers. […] [We] left Matera for the coastal city of Bari. The manager of our hotel directed us to a supermarket where we could buy some of the peppers to take home. But we made a wrong turn […] I figured we could get some dried or fried peperoni di Senise in Bari. I was wrong. “You get that in Basilicata,” all the Bari grocers said. “This is Puglia.”

The moment I tasted this pasta, I felt exactly the same way as Prose did. I loved this dish!! Especially the peppers. And we didn’t even have peperoni di Senise….

The first time we made this, naturally, we didn’t even bother trying to find peperoni di Senise. We used guajillos and moritas. The second time we made it, we used an oven-dried “no-idea-what-its-name-is” red shepherd pepper (vaguely hot) and amarillo peppers.

I feel compelled to point out that we made a number of other minor alterations as well. Rather than baking and cubing day-old bread, we fried store-bought bread crumbs in olive oil so our crumbs are probably finer than those in the SAVEUR kitchen. We didn’t really follow the measurements either. For the amount of pasta for two people, we used 2 anchovies, a good shot of olive oil, 4-5 cloves garlic, seasalt & black pepper to taste and the following other changes.

Also, because the peppers were quite hard, especially after frying, we tossed them in the sauce with the penne to soften them a little. They still retained some of their crunch.

We love the raisin-like taste that the peppers take on. We also love that this is NOT a tomato sauce. The predominant flavour of the peppers is quite wonderful. 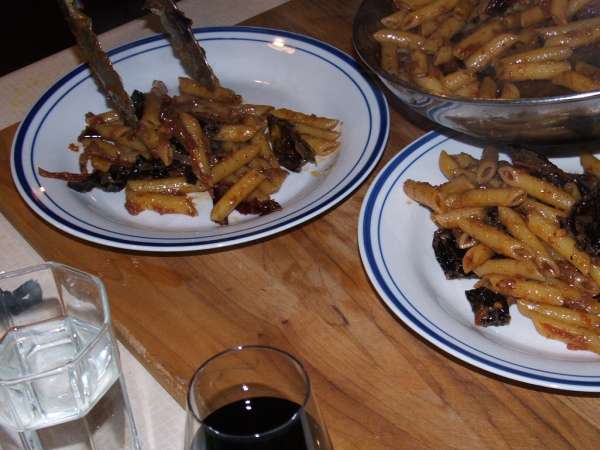 Penne with Fried Peppers and Bread Crumbs
based on a recipe for Pasta con peperoni cruschi e mollica fritta in SAVEUR magazine, issue #120

Serve immediately garnished with fresh basil leaves if you have them.

:: SAVEUR magazine suggests using cherry tomatoes. We’ve used plum tomatoes, field tomatoes, a beefsteak?? tomato or the smaller vine-ripened tomatoes. Any kind of tomato seems to work very well. Just make sure not to use too many.

:: To replace the difficult-to-find peperoni di Senise, SAVEUR magazine suggests using dried mild chiles such as guajillos or pasillas. Because we don’t mind the heat, we used guajillos and moritas the first time but on subsequent times have found that we like amarillos the best in this dish.

:: Francine Prose offers a tip on how best to fry the peppers: “[B]e careful when you are frying the peppers. The oil has to be hot enough to keep them from getting soggy but not too hot, or they’ll burn.” 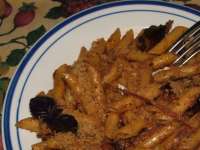 In June, when I was writing this draft, I said, “We’ll definitely have this again!” And of course we have… I love it!! In fact, I think it must be time to have it once again!

On this first time of making it, because our herb garden had just started flourishing (goodness how sad, the herbs are in dismal state now!), I couldn’t help myself from garnishing with a few fresh basil leaves. While it might not be traditional for Basilicata, we thought it was a brilliant addition.

Presto Pasta Nights
Ruth (Once Upon a Feast) created this lovely event for people to share their favourite pasta dishes. Heather (GirliChef – where all roads lead to the kitchen) is hosting this week.

edit 12 November 2009: Heather said she was going to make this pasta soon and she did. Cool! She used guajillos, anchos and soft bread crumbs. Here is Heather’s take on the SAVEUR recipe: