recipe: Pepper Squash (or any winter squash) and Sage Lasagne made with walnuts, cheese, onions and garnished with parsley 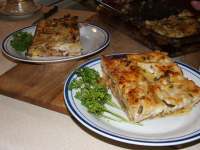 After rereading Kalyn’s stringent rules for WHB 2nd anniversary posts (not really, it turns out), I realized this past Friday’s post featuring Dried Mushroom, Ham, Onion, 2 Cheeses Quiche didn’t quite cut it.

So I have prepared a second post. And how fitting. Kalyn did say that this year “things are happening in two’s for the WHB 2nd anniversary”. 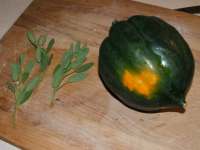 THIS time I am featuring at least one vegetable and one herb in the recipe. And THIS time, I am featuring the vegetable that I thought was going to be everyone’s favourite: winter squash. As it happens, (here comes that “happening in two’s” again!) my favourite vegetable, the onion, is also featured.

Onions are a staple in our house. I can’t think of any time that we haven’t had onions on hand. Just about every dinner has onions in at least one dish. Yes indeed, onions are the best. In retrospect, I’m wondering if I should have predicted onions as WHB’s favourite vegetable.

But when Kalyn first announced the second anniversary theme for WHB, I really thought the favourite vegetable would be winter squash. Maybe because here in Toronto, this is the time of year for winter squashes. There are baskets and shelves filled with winter squashes at every vegetable store. The great thing about winter squash is that as long as the shell is not broken, it keeps for quite a while if it is stored in a cool dry place.

It may come as a surprise to my parents who struggled to get me to eat just a teaspoon of squash whenever it was served that I absolutely adore winter squash!

My favourite way to eat squash is baked. Just cut it in half, remove the seeds and bake it til it’s tender. It doesn’t require any adornment except perhaps a bit of salt and pepper. And maybe a bit of butter or olive oil in the cavity. If the squash is not quite sweet enough, then adding a bit of brown sugar and nutmeg rescues it back to being almost (but not quite) as fabulous as a perfect squash.

I also love squash filled ravioli. And one day in September, just as the squashes were starting to appear in the vegetable stores, I read Tara’s (Should You Eat That?) post about Pumpkin, Sage & Ricotta Lasagne. What a great idea to use squash in lasagne!! Much easier that stuffing ravioli! 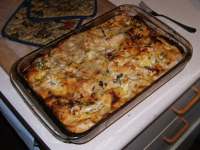 Being the kind of people we are, we consulted several lasagne recipes calling for squash. We decided we would use walnuts rather than pinenuts (Tara replaced the walnuts with pinenuts in the recipe she used), and bechamel and “Ilha Branca” (a Portuguese cheese we have in the fridge) instead of ricotta.

And sage. Of course we’d use sage. We have a fair amount of sage in the garden this year (whoohoo!) and knew it would be perfect in lasagne with squash and walnuts. And of course, onions. And to stay on Kalyn’s everything “happening in two’s” theme, we’d garnish the lasagne with parsley.

Here is what T did:

Pepper Squash and Sage Lasagne
with walnuts, cheese, onions and garnished with parsley

A word of caution: if you are in the habit of adding sugar to an inferior squash, guard against adding too much. The onions will add a fair amount of sweetness.

edit 5 November 2007: We’ve now made the lasagne using both butternut squash. The dish was equally good, if not better. I suspect that any winter squash would work. **

I loved the lasagne!

Next time, we will leave out the ham. It’s just not necessary. And instead of putting a thin layer of bechamel under the first lasagna layer, we’ll use a bit of stock. We will also put some sage in the inside layers as well as toasting some walnuts and garnishing each slice with some toasted walnuts.

This is definitely a keeper! Thank you, Tara, for giving us the idea.

Pepper, aka acorn squash (I just googled to double-check the name. Ha! I always thought it was always called a “pepper squash” and had a devil of a time finding it… it appears that “acorn” is the standard name) is the type of winter squash we usually choose. Even though I have no idea how to tell if the squash is going to be the best one. Do I choose the heavier one?? Do I choose the one with a bit of orange on the shell? One with no orange? A smaller one? A larger one?? Luckily for me, even when a squash isn’t absolutely perfect, it’s great. But when it is perfect and has ripened properly, it’s wonderful! The inside is dark gold and firm (but not too firm), tasting nutty and sweet (but not too sweet).

When checking the name of the squash on The Cook’s Thesaurus, I saw the following handy note that I MUST remember:

When buying winter squash, choose one that is hard and feels heavy for its size. […] Acorn squash are […] also known as pepper squash, their smooth thin skin varies in colour from deep green to white to orange, and sometimes a combination of all three.

I used to use sage only in dressing for chicken. I thought it too strong for most other things. But relatively recently, we discovered the wonders of fresh sage fried in olive oil and tossed into pasta. The wild strong flavour is completely tamed by cooking and becomes sweet and just a little spicy. Add some oven roasted sweet potato and the dish becomes (if it’s possible) even more sublime.

Sage is also fantastic as a topping for focaccia. Place several whole sage leaves and thinly sliced onions on top of focaccia dough. Drizzle with olive oil, sprinkle with coarse sea salt and bake til golden. The onions get caramelized and if there isn’t enough sage, it almost, but not quite, gets lost.

I now like sage so much that I was hard-pressed to choose basil over sage when Kalyn asked us our favourites this year. (And yes, yes, I know. Last year, I said that tarragon was my favourite herb. And it still is. But so is basil. Really. I can’t be expected to actually choose. :stomp:)

Sage thrives on neglect. It is a hardy perennial that loves sun and lean soil. No wonder it grows wild in many parts of the world. It will grow in semi-shade as well but prefers full sun. The only thing it doesn’t seem to like is too much water and freeze/thaw/freeze in the winter. It will grow indoors in a pot but the flavour is markedly faded. Like most plants, sage needs require actual sun to develop completely.

my favourite vegetable and herb: onion and basil
my predicted favourites: winter squash and basil

This is the second anniversary of Kalyn’s (Kalyn’s Kitchen) popular Weekend Herb Blogging event! In celebration, to double the fun, Kalyn asked us vote for our favourite herb and our favourite vegetable as well as to post a recipe featuring vegetable(s) and herb(s) with information on at least one of the two. Here is what she wrote:

Vote For Your Favorite Vegetable and Favorite Herb of 2007
[P]articipate in the official WHB Vote For Your Favorites poll […] even if you’re also submitting an entry, because remember, everything is happening in twos! You may even vote for different herbs and vegetables than you use in your recipe if you’d like.

Enter a Great Recipe Featuring Vegetables and Herbs
[…] [S]end a recipe featuring at least one vegetable and one herb, then include some information about at least one of the ingredients you’ve chosen. Recipes with more than one vegetable and more than one herb are also great. Extra servings to anyone who finds a really unusual combination or unusual herbs or vegetables to write about. (Your recipe does not have to have the same herb and vegetable you vote for as your favorite.) […]

The timespan for entries for WHB 2nd Anniversary is Monday morning, 8 October until 15:00 on Sunday, 14 October 2007 Utah time (GMT -6). For more details on how to participate in Weekend Herb Blogging, please see the following:

edit 15 October 2007:
Whoohoo! Kalyn has posted the recap for the 2nd anniversary of WHB. Take a look: