summary: a perfect resolution for rock hard avocados that refuse to ripen; pickled avocados; in praise of Yasmin Khan;

Avocados seem to be working against us. When a BLT (or an ABLT, as it were) calls for slices of the green stuff, or some tortilla chips are asking for a monster bowl of guacamole, the avocados at the local grocery store are never as ripe as we want them to be. – Alex Delany, Bon Appetit

It’s true! It seems that all we can get are rock-hard avocados. It’s the penalty for living in the frozen north.

And then when one from the little net green bag is finally ripe, all of them immediately ripen and go bad.

But I thought that I had finally learned how deal with this: the moment that the first avocado in the bag is ripe and ready (by pressing gently at the stem end to see if there is give), all the avocados go into the fridge.

This has worked over the winter. When avocados were in season where avocados grow. 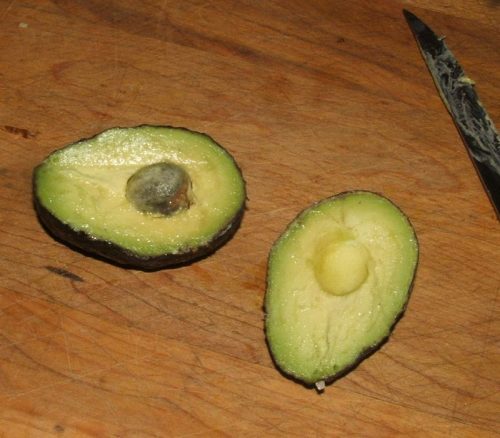 But last week, this seemingly fool-proof method ceased to work. After letting the avocados sit on the counter for several days, we had a perfectly ripe avocado in our salad one night. I immediately put the rest of the avocados in the fridge.

A couple of nights later, I cut open another avocado. Smoke swirled and sparks flew. The avocado was hard as a rock. All the rest of the avocados were hard as rocks. Out of the fridge they came.

I poured lemon juice on the cut avocado and pushed it back together with elastic bands, and put it with the rest of the avocado-shaped rocks. (It didn’t work. After many days, the avocado was still rock hard and completely brown inside; it was relegated to the compost bin.)

All but one of the rest of the avocados ripened nicely. Yay. 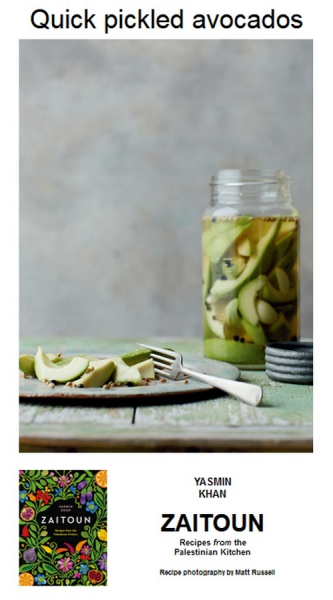 Then, yesterday morning while sitting on the porch drinking coffee, we read the following in one of our current read-aloud books:

For someone as impatient as me, this was a wonderful discovery, as it magically transforms firm, unripe avocados into delectably soft and tangy morsels after just a few hours. Not longer do you have to wait for [avocados] to soften in your fruit bowl, just douse them in this sour and salty brine for a few hours and they will be ready to enjoy alongside rice pilafs or mazzeh (mezze) dishes. These are best eaten on the day you make them.

We had to try it with the last avocado that was steadfastly refusing to ripen on the counter.

). So we used powdered coriander.

Just in time for serving dinner, in just 6 hours (or was it 5?) this is what appeared: 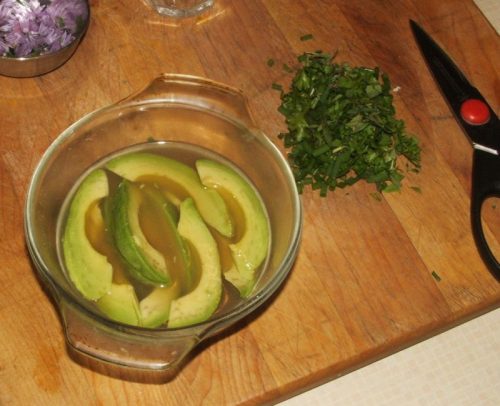 Before taking the plates to the table, we each tried a little slice of pickled avocado. 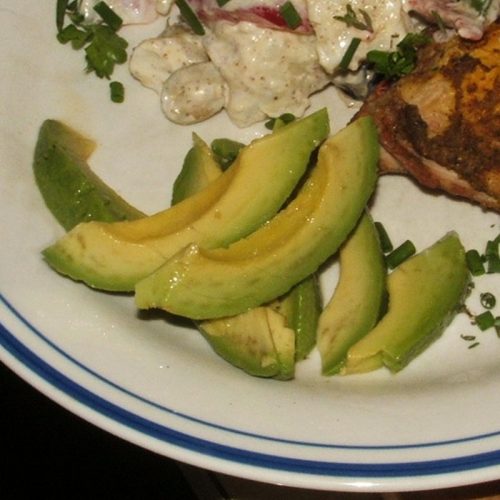 This really is brilliant.

Next time we go to the vegetable store, we’re going to buy more avocados. Ha. I wonder if any of them will get a chance to ripen.

Our dinner last night was better than ever: potato salad, left-over grilled chicken, herbs galore from the garden, and pickled avocado. With a couple of glasses of crisp Sauvignon blanc. 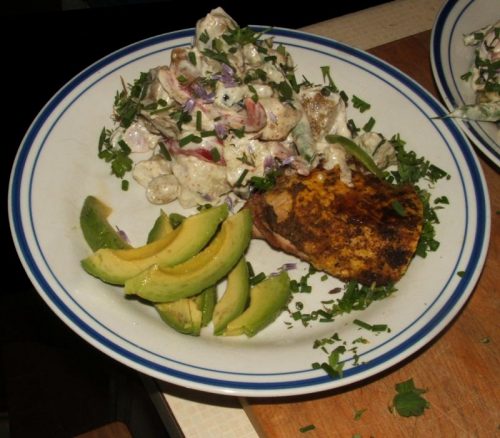 Update 23 June 2021: A few nights ago, we tried this again with an absolutely rock-hard, just from the grocery store, avocado. Even after marinating in the vinegar solution for 24 hours in the fridge, the slices were still rock hard and tasted only of the vinegar solution. We now know that Yasmin Khan’s notion of “rock hard” and our notion of “rock hard” are wildly divergent.

I have been able to rescue the still-after-hours-and-hours avocado pickle slices by cutting them into small pieces and stir-frying them with Swiss Chard. The avocado doesn’t add a lot of flavour – other than the vinegar solution it has absorbed – but at least we are not having to throw it away.

Next time we try this recipe, we’ll be sure to use an avocado that has at least a little give at the stem end.