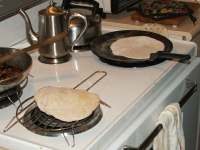 On Saturday, we decided to see if pita bread could be cooked on the stovetop. And as it happens, it can. In fact one has more control and the pita turns out even better.

We used our tava but I would think a cast iron frying pan would work just as well. Note that the pan is not oiled.

I rolled out two discs before we started cooking the bread. As I was rolling out the second disc, T heated the tava over medium high heat. As I continued rolling out the rest of the dough, T placed the first uncooked disc on the unoiled hot tava. Almost immediately, little bubbles appeared and the pita rather quickly took on a uniform lighter colour. The half cooked pita was turned over and left for about 30 seconds or so to continue cooking on the other side. Then using tongs, T moved the pita from the tava to rack over med high to high heat. T continued using the tongs to move and turn the pita around on rack so it puffed all over.

As he did that, I interrupted my rolling to slap the second disc onto the tava.

Sometimes, if great care isn’t taken with the tongs, a little hole will appear to deflate the pita. When that happened, T tried as best he could to seal the hole with the tongs so that the rest of the pita could continue to puff. Once the first pita was done, T moved it onto a plate on the counter and covered it with a large lid. He then began to attend to the disc that was on the tava.

And so we continued with eight discs. I was rolling frantically trying to get done before discs 7 and 8 were finished so that I could photograph the procedure. It really doesn’t take long to cook pita!

It is a bit more fiddly to cook pita on the stovetop but we think it might use a little less energy because the oven doesn’t need to be turned on. And the final result was great. The pita were lovely and soft. The pita were so inviting that on Sunday morning we were forced to have hard boiled eggs and chili paste again. Fabulous!!

5 responses to “pita on the stovetop”