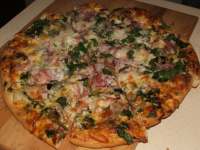 We love pizza! And on Monday morning, T announced that Monday is Pizza Day. Who am I to argue? I just went to the kitchen and made dough – the kind that can be spun in the air. If you want to take the risk, that is. (Frankly, I don’t. I’m ascared… I don’t really like the idea of washing the kitchen floor JUST before dinner.)

And then we headed out on our bikes to get toppings. Yes!! Our bikes!! The snow is finally disappearing from the roads.

The spinach at our vegetable store has been stellar lately. And there is nothing so wonderful as spinach on pizza. But it can’t be watery! Oh my no.

It’s simple. It doesn’t require pre-cooking. All you do is wash the spinach well – include decent looking stems too. Put the washed spinach in a colander and sprinkle it well with salt. The salt will do the cooking.

I’m guessing that I use around a tablespoon of salt for a big bunch of spinach leaves. Toss the leaves to spread the salt around and then allow the spinach to rest and drain for about 30 minutes- more or less. When you return to the spinach, you’ll see that it’s quite limp. Squeeze it out. Hard. Rinse, taste for salt and squeeze again. Hard.

You’ll be left with the most wonderful emerald green spinach balls. Chop these coarsely to put on the pizza as you assemble it. The green stays wonderfully green and the spinach taste is lovely and fresh. No over-stewed flavour.

Here’s what T does to make our tomato sauce:

T’s Pizza Sauce
As with so many of T’s recipes, there are no measurements. You’ll just have to use your own judgement.

Use as a spread on pizza dough with crushed dried basil before adding other toppings.

This sauce really is fantastic. Much better than the commercially prepared “just any old tomato sauce” that we used to use.

And to drink? Well, with pizza, we like red wine. Something dry but fruity like a Sangiovese or a Chilean cabernet sauvignon.

But pizza is salty and makes a person thirsty. Apparently we’re not supposed to have more than a couple of glasses of wine. (Sheesh, those health fiends are always spoiling things, aren’t they?) So I add a tiny bit of pomegranate juice to water – just plain old tap water. It’s delicious! 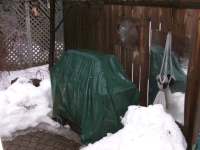 Here’s another reason to celebrate. At last the precipitation has changed to rain (I’m just going to pretend that those weren’t flurries I saw this morning). Maybe we’ll be able to barbecue this year after all!

Stephanie (Dispensing Happiness) holds a blog party every month. And this month, it’s a Pizza Party! Here is what she has asked people to bring:

Anytime between now & Thursday, 20 March [2008], prepare at least one pizza-ish bite and some kind of corresponding beverage. Yes, it’s a ‘cocktail’ party, but that doesn’t mean non-drinkers have to be left out. Heck, I don’t drink alcohol, but coming up with interesting drinks is one of my favorite parts!

The deadline for BP#32 is Thursday 20 March 2008. For complete details on how to participate in Blog Party, please see:

When I was around 13, one of my friends had a birthday party. All of the girls in our class were invited to her house for the party. When we arrived, we were ushered into the kitchen and given big tea towels to wrap around our waists as aprons. Because my friend’s mother had prepared several cookie trays of already shaped pizza dough and bowls of various toppings.

She then invited us to make pizzas. I have to say it was one of the most fun birthday parties I ever attended. We laughed and argued about what toppings would go well together and eventually our pizzas were baked – each cookie tray divided into about three with different toppings on the various parts. And once the pizzas were cooked, we feasted. Cutting the pizzas so that everyone could try all the different toppings. Laughing and arguing about which topping was best.

We never did concur. But we finished all the pizzas. They sure were good.