summary: recipe for Biscotti Picanti (Sicilian-style rusks made with white wine and flavoured with black pepper, fennel and sesame seeds) based on a recipe by Anissa Helou; Bread Baking Babes 4th anniversary; submission for YeastSpotting; (click on images to see larger views and more photos)

It’s the BBBabes’ 4th anniversary! Of course this calls for wine! 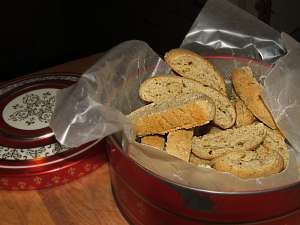 White wine, in this case.

To go into biscotti. Savoury biscotti. I LOVE savoury things! I LOVE biscotti!! I couldn’t wait to get started.

But I didn’t wait to get the wine. Oh my no. It’s good to be properly prepared.

We rarely have white wine any more. But when we were buying wine, I dutifully slipped a bottle of pinot grigio (Italian, of course – the recipe is from Italy) into our basket of bottles of Argentian, Chilean and Italian reds.

On Tuesday, I casually mentioned that I would be using a little white wine for this month’s BBBabe bread and asked if we should have something with shrimps tonight to go with the rest of it.

he: But we already talked about tonight. We’re having Persian food.

me: Oh yah!!! That’s right! And am I supposed to be making Pebbled Persian Bread (Hushva Nan) from “Flatbreads and Flavours?” … mmmmm, Persian food….

I can’t believe that I haven’t raved here about this Persian dinner of lentils, eggplant, beets and ground meat and mint patties! But that’s another story; let me get back to the biscotti…

We decided to shelve the Hushva Nan (as wonderful as it sounds) for another day and I started getting out the ingredients for the biscotti.

Tuesday 14 February 11:04: Because of our storage problem, I decided to make half the recipe. I grabbed a piece of junkmail with a blank spot on the back and scrawled out the revisions. (One of these days, I’ll learn to PRINT the recipe instead of scribbling it onto a ragged piece of paper.)

My brain exploded with trying to figure out what half of 1⅔ c was so I simply divided each part in half: ½ c + ⅓ c. Then in an afterthought, I added an outline of the instructions too.

I looked over the ingredients list one more time:

Quel relief. I decreed that we did have all the ingredients after all.

I opened up the pinot grigio and took a sniff. (No, no. Not a snort! Never before 6pm!!) It smelled fine – maybe a little soft – but it should be excellent for cooking.

As I was mixing, I looked at the amount of water and thought “What??? That can’t be right…” and ran upstairs to look at the actual recipe.

Yup. I got it wrong. I had forgotten to halve the amount of water. GOOD THING I CHECKED!!!

The dough came together very well and seemed the perfect consistency. As per the outline, I kneaded it a little and looked at the next step: shaping. “Hey!! Wait a minute… isn’t it supposed to rise before shaping?” And back upstairs I ran to look at the actual recipe. GOOD THING I CHECKED!!!

3. Add yeast, wine and ½ cup (115 ml) warm water en knead briefly to make a rough ball of dough. Knead this for another 3-5 minutes or so. Cover and let rest for 15 minutes. Knead for another 3 minutes until the dough is smooth and elastic. Shape into a ball and let rise in a lightly greased bowl, covered with greased plastic, for 1 hour in a warm place (or until doubled).

I kneaded the dough til it was smooth, shaped it into a ball and put it into the clean mixing bowl (yes, yes, I know; I was supposed to oil the bowl. I could say that I forgot, but that would be an untruth), covered it and stuck it in the oven with only the light turned on. It’s ridiculously cold in the kitchen right now, so I filled a couple of bowls with really hot water too. Maybe that will encourage it to rise before tomorrow.

12:30: The dough hasn’t budged. The water is now lukewarm. I replenished with hot water, closed the oven and crossed my fingers.

4. […] [S]hape each piece into a loaf about 12”( 30 cm) long. Transfer the logs to a baking sheet lined with parchment paper and leaving at least 2 inches/5 cm between them so they can expand. Take a dough cutter (or sharp knife) and cut the loaves into 1 inch/2,5 cm thick slices (or if you prefer them thinner in 1″/1 cm slices). Cover with greased plastic and let the rise for about 45 minutes. 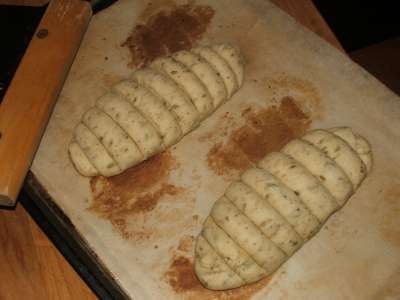 I found the knife and bench scrapper mashed the dough down and I didn’t like. I used dental floss and cut all the way through…like that the best, just gave the ends a gentle push back so it was loosely together

-Tanna, via email to BBBs

Of course! Dental floss WOULD work better!! Next time.

Isn’t Ontario clever to charge us the most over the dinner hour in the winter? (Interesting that in the summer time, the dinner hour is not considered peak time….) Why oh why can’t our rates be based on how much we consume rather than when we’re using the power?

18:54: The oven is preheating and (I’m so thrilled) the little shaped loaves have risen!!

Yes, it’s true; I let them sit for longer than the specified 45 minutes. I made an executive decision that there was some rising expected in that time. (I’m afraid I didn’t look after 45 minutes to confirm that nothing much had occurred.) 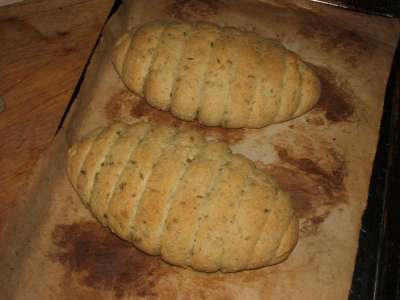 19:17: Hmmm, not quite as golden as I expected. Perhaps I should have turned the oven higher than 400F. Still, if I squint, I can detect a very light gold colour.

22:32: Of course, these were baking while we were eating dinner. And because I didn’t want to have to be jumping up and down checking them every 5 minutes after the requisite hour had passed, I simply turned the oven off and left them there to languish until we were finished eating.

They smelled divine!! We each tasted one. And they were delicious!! T said he couldn’t wait til the morning to have them with marmalade and coffee. Neither can I!

Thank you, Lien! I knew these were going to be good but I didn’t realize they would be this good!

What a perfect way to celebrate an anniversary! 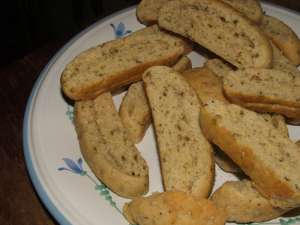 The biscotti can be kept for up to 3 weeks. Good luck with that. They’re really delicious and won’t last much more than a couple of days.

1.) Fennel Seeds: The recipe calls for aniseed. I would have used them if we had had them. I ALMOST substituted with dill seeds but at the last minute found myself reaching for the fennel seed jar.

2.) Sesame Seeds: The recipe calls for white sesame seeds. We only had brown sesame seeds (because that’s what is readily available in Indiatown).

4.) Oven Temperatures: We have an ancient oven and are quite unsure about the actual temperature. I rarely set it higher than 400F now. But I may set it to 450F for these the next time. The loaves were barely gold after 15 minutes at 400F.

These biscotti really are delicious! Now I’m sorry that I made just half the recipe… luckily, we still have some white wine left in the fridge. I can make some more.

Thank you, once again, Lien!

4 YEAR BREAD BAKING BABES ANNIVERSARY!!! How time flies when you’re having fun. And of course that calls for party food to nibble on with a sip of wine. And as I have the honour to be the kitchen of the month this time, I’ve picked a Sicilian recipe to enjoy with (or without) a little wine, that even has wine in it too! It’s from the wonderful Anissa Helou book “Savory baking from the Mediterranean”.

What a perfect way to celebrate! We do hope you’ll join us.

To receive a Baking Buddy Badge to display on your site: bake Biscotti Picanti in the next couple of weeks and post about them – please remember to link to Anissa Helou’s Blog (www.anissas.com/blog1/) in your post (we love to see how your bread turned out AND hear what you think about it – what you didn’t like and/or what you liked) before the 29 February 2012. If you do not have a blog, no problem; you can also post your picture(s) to Flickr (or any other photo sharing site) and record your thoughts about the bread there. Please remember to email the Kitchen of the Month to say that your post is up.

Please take a look at the other BBBabes’ Biscotti:

definition and etymology of biscotti 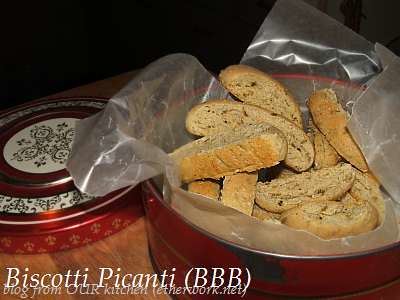