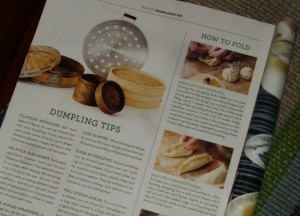 For weeks, the LCBO’s Food and Drink Magazine has been sitting on the telephone table in the kitchen, opened to the page with tips about how to serve dumplings.

The magazine has been there so long that we don’t even see it anymore.

Then, the other day, when we were ranting about never having any room in our little freezer, saying “Why don’t we just throw these shrimps out?!” about the mistake of a bag of already peeled headless but uncooked shrimps and trying not to remember the night that some of those shrimps were used to ruin what would have been a perfect South Indian style coconut curry (they really are inferior shrimps. A disgrace. In so many ways), suddenly, we remembered about the Chinese dumplings tips in the LCBO magazine.

It was the perfect solution for what to do with those inferior shrimps. We could chop them up and incorporate them into the filling for Chinese dumplings! Which is exactly what we did.

Of course, first, after staring at Janice Poon’s tips, we consulted all of our cookbooks and the internet to see what other people put into their dumpling fillings and dipping sauces.

Then we put on our coats, hats, scarves, mittens, big socks, and boots, and raced out (well, raced as well as anyone can weighed down that way) into the still snowy neighbourhood to walk to the vegetable store and butcher to get broccoli, green onions, bok choy, and ground pork.

When he had finished, he came up to his office, beaming, “You should taste the sauce I made with hoisin! Is it ever good!”

Then about an hour before it was time to make the dumplings, it was my turn to go into the kitchen to put the kettle on to boil water for making the dough. 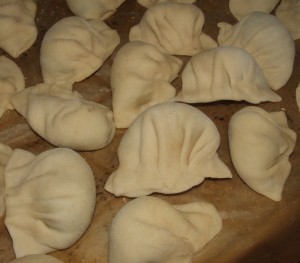 When it was time, armed with memories of various YouTube videos on how to roll out, shape and cook dumplings, with Victoria Li’s voice ringing in our heads, we skipped into the kitchen. 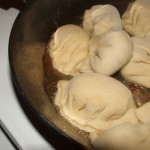 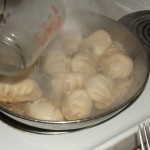 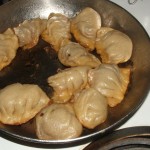 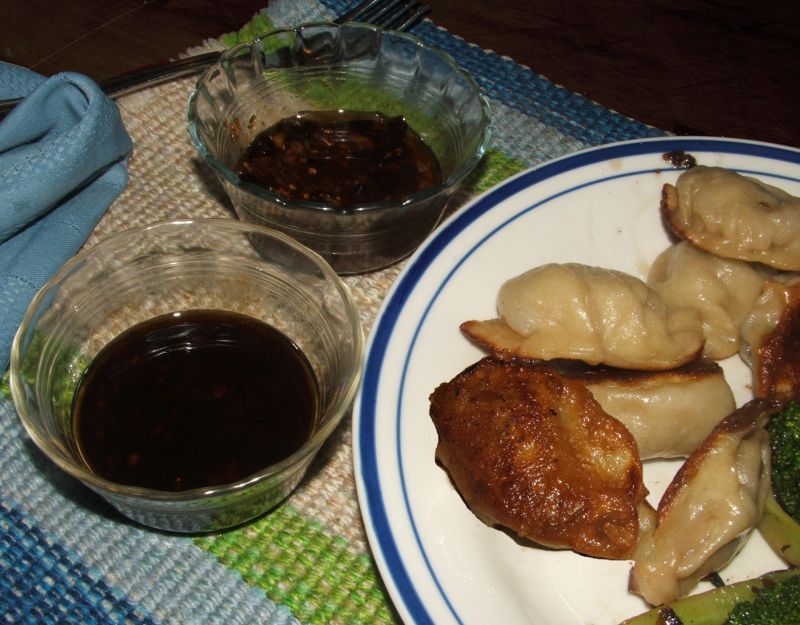 Step 1: Fry in hot oil; Step 2: Steam in water for 6-8 minutes (use a tight-fittinglid);
Step 3: Remove the lid. Fry until all the liquid is gone; Step 4: Serve hot with dipping sauce(s).

Here’s what we did to make our potstickers:

Serve the dumplings in a big pile, making sure to show off the golden bottoms. -the Dumpling Sisters

We were thrilled! Our dumplings were brilliant. Our sauces were brilliant. They were so brilliant that instead of leaving the left-overs to have for today’s lunch, we went into the kitchen after dinner and cooked them to have dumplings for dessert.

This is my favourite kind of dessert. I LOVE dinner for dessert!

In fact, they were so delicious last night that as I was writing this report, T came in and said, “Do you want to have dumplings for lunch? We could finish off those shrimps, and there’s still some green onions and bok choy…”

Who am I to say no? I’m going to put the kettle on to boil now….

Bookmarked Recipes
Some time ago, Ruth (Ruth’s Kitchen Experiments) created this event to urge herself (and everyone else) to actually make the several recipes they have bookmarked in various books, magazines and internet pages. Then Jacqueline (Tinned Tomatoes) took over and because she is vegetarian, she requested that submissions be vegetarian or easily changed into vegetarian recipes.

Sadly, as far as I know, Bookmarked Recipes is no longer officially in operation. But of course, I still have zillions of recipes bookmarked.

IF the event were still ongoing, I would submit this post because the filling could easily be changed to become vegetarian (say, something like spinach and mushroom).