The other day, we had one of my favourite breakfasts: chura with toasted coconut, peas and nuts. Usually, T uses peanuts, but this time we were extravagant and had cashews. As always, the chura was spectacular.

It was great as an afternoon snack too….

The next day, as we were riding our bikes home from grocery shopping and wishing there was still a little chura leftover as a snack, T suddenly informed me that his friend in India used to serve puffed chura all the time with tea in the afternoon. Here’s how the conversation went:

he: Yah. Haven’t I ever made that?

he: Should I make some now? 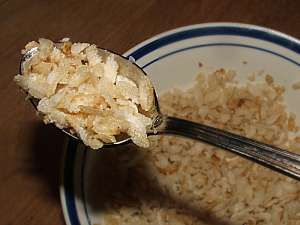 I wanted to try it. Right away.

I love this!! Potato chips?! Pfuiey. Who needs them?

Dry flattened rice that has been deep fried in a small amount of hot oil in the wok is fantastic. All it needs to finish it is a little sea salt.

Fried flattened rice is one of the standard ingredients in numkin. I’ve usually turn my nose up at the commercial packages of numkin that T buys in Indiatown. But now, I suddenly need homemade numkin!

Let’s see now… dahl (the really little kind), a tiny bit of cumin and nigella, broken vermicelli noodles (the kind made with besan), perhaps some mustard seeds, and maybe some green chili coins? What do you think?

Here’s what T did to make plain puffed rice:

To serve, spoon some chura into your hand and munch away. Try to get away with taking just one spoonful!

As I was typing this, it occurred to me that this could be made easily into a spicy snack. You could blacken a dried cayenne chili in the oil and THEN add the rice. 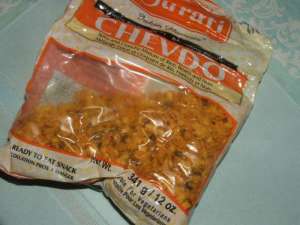 I googled to see if others had had the same thought. While searching for numkin recipes, I ran into the usual problem – the many and various spellings of ingredients for Indian food. “Namkeen” seemed to be the most common version for “numkin”.

Then I looked in the kitchen at T’s stash from Indiatown and found a package of numkin. Ha! Its name isn’t even close to “numkin”! It’s called “chevdo”.

The ingredients listed on the Surati package of chevdo are: