Do you have a sweet tooth? Then this cake is for you! 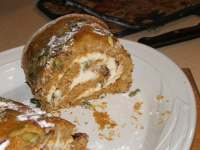 I actually prefer savoury dishes to sweet dishes, but the photograph for pumpkin cake roll in this month’s SAVEUR magazine was so tantalizing that I had to make it.

So as complicated as it seemed to make a roll cake, I went ahead and used some of our baked pumpkin and did it! But first I googled to see if others had made the cake. I was surprised to see that in some parts of the world, this is a standard cake for the Thanksgiving table. As far as I know, I’ve never seen anything like it. The closest that I’ve ever seen is a vanilla cake roll filled with lemon butter that Mom used to make from time to time (it’s delicious…)

And so do many of Deborah’s readers. This clinched it. I absolutely HAD to make it! I took a look at Deborah’s recipe and it was virtually the same as the SAVEUR recipe. And Deborah offered a really good tip about what kind of tea towel to use for rolling the cake in her post.

And I baked the cake….

The cake was done just as I was about to mix the filling. I hadn’t absolutely covered the jelly roll pan right to the edges with parchment paper so when I transferred it to the tea towel, there was a tiny edge left in the pan. I tasted it… SWEEEEEET!!!

And I immediately decided to reduce the amount of sugar in the filling. In retrospect, I should have left ALL of the sugar out of the filling.

Pumpkin Roll Cake
based on a recipe in SAVEUR (Nov2007)

Notes:
* This cake is plenty sweet enough without adding extra icing sugar. Unless you have an incredibly sweet tooth, leave it out of the cake step….

** The SAVEUR recipe calls for a whole cup of icing sugar. Eeeeek!!! Too much!! I cut the amount in half and still it was too sweet.

*** If there is icing sugar on the cake, the icing sugar will melt into the cake if it is covered. I wouldn’t bother covering the cake at all until after it has been cut. 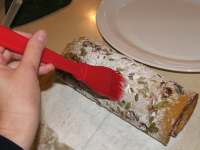 Did I remember to mention that the SAVEUR recipe suggests sprinkling the towel with icing sugar? Don’t do it!! The cake is already quite sweet enough! As soon as I saw the rolled up cake, I knew it was too much and made a futile attempt to brush some of the sugar off. (ha. not a chance… I hardly removed any!)

People who love sweets will LOVE this cake. I LOVED the first bite of the cake. (On the second bite, I felt dizzy from the sugar rush.) I know I will love every bite when I make the cake again using far less sugar.

Hmmm, it shouldn’t be a surprise, but it tastes quite a lot like our carrot cake! As you may have guessed, for me, the SAVEUR cake was just a bit tooooooooo sweet. Next time, I would omit the icing sugar step from the cake entirely. It just isn’t necessary! I might be tempted to cut the amount of white sugar too and perhaps use a half and half mix of brown and white sugar as I do for carrot cake…

And I’d use probably our cream cheese icing for the filling.

Still, I’m really glad I made the cake. It wasn’t nearly as difficult as I thought it was going to be. And it was very fun to use the hand-held mixer.

What I really like about the cake is the rolling technique. We may do this for the next chocolate cake we make. I bet it would be a great way to assemble Black Forest Cake too.

Even though cake is fine, I really must remember that I prefer savoury dishes!
I was sorry to have missed getting a post together for WTSIM… layered cake. I wonder if Andrew would have been swayed into agreeing that a roll cake could be considered as a layered cake. (Heh, with some judicious *cough* cajoling and whining, I might have been able to persuade the slightly more lenient Jeanne, but somehow I suspect that Andrew might have been tougher. Probably just as well that I didn’t try. :-))