It snowed again yesterday afternoon. But I’m happy to say that even though the flakes were large and fluffy, they did NOT stay on the ground! Perhaps spring really is about to spring.

In the meantime, as it’s still rather chilly, Puy lentils are the perfect thing to get the blood flowing, as well as being just the dish for this month’s

Waiter, there’s something in my… pulses! 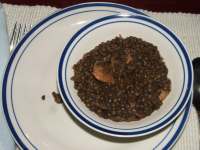 These Puy lentils were made after watching Laura Calder’s “French Cooking at Home” on the Food Network (Canada). They may not look all that wonderful but trust me, the taste is fabulous.

We’ve often made Puy lentils in the past but Calder’s idea of cooking the lentils in chicken stock was new to us. We had to try it! 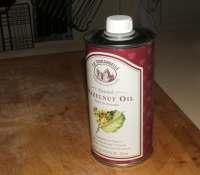 Here’s how we made the lentils:

Puy Lentils with Sausage
based on Laura Calder’s recipe for “Sausage and Lentils”; as usual, no measurements…

Drizzle each bowl of lentils and sausage with hazelnut oil and serve with crusty bread and a vegetable. A salad would be good too…. 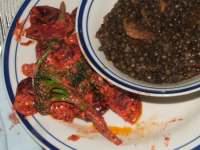 We served the lentils with steamed beets and broccoli dressed with sauteed fennel seeds and caramelized onions (I pretty much used this recipe). But I made a slight error in judgement and decided to add a bit of cream as well.

The taste was fine. More than fine. I must admit that the vegetables really do look pretty dreadful. But trust me, they were delicious!

We had planned to serve wild yeast focaccia. However, as I whined earlier this month, the dough didn’t rise and I used it to make chapatis instead.

Luckily, we didn’t have to scramble to the store to buy bread. One of the loaves I made for BBD#06 was still in the freezer. It took no time to thaw, reheat and recrisp. It was the perfect accompaniment for these lentils. Probably better than the focaccia would have been….

Waiter, there’s something in my… (WTSIM…)

Jeanne (Cook Sister!) is hosting March’s WTSIM…. Our Puy lentils were cooking on the very day that she posted the theme of pulses. (Again I ask, does she have a hidden camera in our kitchen?!)

Here is what Jeanne wrote in her WTSIM… pulses! announcement:

[N]o, I haven’t confused a waiter with a nurse or a kitchen with a consulting room. This kind of pulse has nothing to do with be still my beating heart… […] [P]ulses (or legumes, if you will) are your friends, rain, wind or shine. Think beans, lentils and chickpeas. Think warming casseroles and colourful salads. In fact, there’s no weather that’s the wrong weather for pulses.

The deadline for WTSIM… pulses! is 28 March, 2008. If you would like to participate, please read the following for more information:

On the day that we made paratha from failed focaccia dough (the day after making chapati), after years of my wheedling, T threw together the most brilliant chole (chickpea curry) to serve with rice. Because it was a last minute decision, he used canned chickpeas and no recipe – as usual. We HAVE dried chickpeas and next time, because there will be several next times, we’ll presoak dried chickpeas and cook them. I’ll watch like a hawk to see exactly what he does so that I can post his recipe.

If I had thought to take a photo of the chole, I would have posted about the chole for WTSIM… pulses!. But alas, there is no photo. Not even a photo of the empty bowls. It was so good that we licked them clean. Remind us to have it again soon.