Contrary to first appearances, this is not a post for 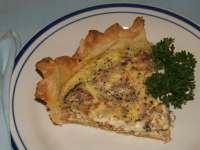 I was feeling so smug today as I got all set to begin a post featuring Dried Mushroom, Ham, Onion, 2 Cheeses Quiche for the WHB 2nd anniversary.

And I was going to be early!! Rather than my usual late or nick of time…. Then I reread the rules and noticed the following:

For the anniversary edition of WHB, we’re asking participants to send a recipe featuring at least one vegetable and one herb, then include some information about at least one of the ingredients you’ve chosen.

At least one vegetable and one herb? Oh oh.

Try as I might I couldn’t figure out a way to pretend that mushrooms, ham or onions were herbs. (Maybe one of the cheeses?? :lalala:) I really don’t think that trying to get away with saying the parsley garnish on the plate is part of the quiche recipe would go over too well.

But even though it doesn’t fit in to the WHB guidelines, allow me to rave about this quiche anyway.

Last Sunday, as we were feeding the cat and preparing morning coffee , T suddenly said, “Didn’t that quiche that Laura Calder* made on TV look good? Do you want to have quiche for brunch?”

I ask you. Who would say no to such a great offer?! 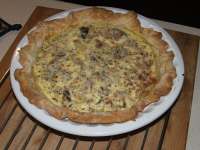 So my hero whipped up some pastry, soaked and sliced dried mushrooms, fried onions and ham, grated cheese and in really no time at all, I was presented with this most wonderful feast!

I love the fresh clean taste that raw parsley offers. It’s especially good to eat after one has had eggs or onions or garlic. It’s essential to have at least a few sprigs in pesto and in stock. And of course, it’s wonderful chopped up and put into cheese stuffing for manicotti or canneloni as well. I can never understand why it is that people leave the parsley garnish on the sides of their plates instead of eating them. Do you think they’ve all read on the website Plants For a Future (PFAF) the phrase “parsley is toxic in excess”?

I must say that comes as a huge surprise to me. I never knew!! I wonder just how much parsley one must consume in one sitting for it to become toxic. I bet it’s not physically possible for a person to even eat that much…. (Please note that the PFAF site also stresses that parsely is “perfectly safe to eat and nutritious in amounts that are given in recipes”)

This WAS going to be my post for WHB 2nd anniversary. I still hope to put one together on time and when I do, I will at that time announce which vegetable and herb are my favourites. Here’s a hint: one of my favourites is featured in this post about quiche.

* Laura Calder hosts French Food at Home on The Food Network (Canada). On the episode entitled “Savoury Tarts“, she featured a delicious looking quiche. We also plan to make the spinach wheel she made on the same show.
~~~~~~~~~~~~~~~~

The second anniversary of Kalyn’s (Kalyn’s Kitchen) popular Weekend Herb Blogging event is coming up this weekend! In celebration, to double the fun, Kalyn is asking us vote for our favourite herb and our favourite vegetable as well as to post a recipe featuring vegetable(s) and herb(s) with information on at least one of the two. Here is what she wrote:

Vote For Your Favorite Vegetable and Favorite Herb of 2007
[P]articipate in the official WHB Vote For Your Favorites poll […] even if you’re also submitting an entry, because remember, everything is happening in twos! You may even vote for different herbs and vegetables than you use in your recipe if you’d like.

Enter a Great Recipe Featuring Vegetables and Herbs
[…] [S]end a recipe featuring at least one vegetable and one herb, then include some information about at least one of the ingredients you’ve chosen. Recipes with more than one vegetable and more than one herb are also great. Extra servings to anyone who finds a really unusual combination or unusual herbs or vegetables to write about. (Your recipe does not have to have the same herb and vegetable you vote for as your favorite.) […]

The timespan for entries for WHB 2nd Anniversary is Monday morning, 8 October until 15:00 on Sunday, 14 October 2007 Utah time (GMT -6). For more details on how to participate in Weekend Herb Blogging, please see the following: