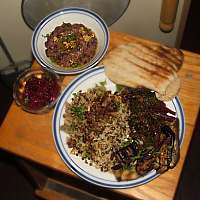 Even though we love a good chop, it’s also nice to eat a vegetarian dinner that is still entirely satisfying. The biggest challenge with vegetarian food for us has been to ensure there are many different textures.

This latest middle eastern style dinner was a spectacular success. It’s the perfect kind of dinner for a hot summer night. And it had gotten disgustingly hot again here this past week. (Thank goodness, the heat broke today and life is much more bearable.)

But that day, it was debilitatingly hot. We wilted as we discussed what to have for dinner. Initially, we had decided to have hummus, but were amazed to see that we didn’t have any chickpeas! What??? No chickpeas??? How can that be?

The idea of bicycling to Indiatown breathing in the hot stinking sludge disguised as air was too daunting. So we quickly changed directions and decided to make fuhl with kidney beans. Excellent decision!!

While pulling out the tahini to make the fuhl, we rummaged through the fridge to see if there was any cabbage left to make a cabbage salad. No cabbage. But… Aha! A lone beet lurking under a bag of beet greens¹!

Beet salad would be easily as good as cabbage salad. And look prettier too. Not to mention that it would be a good opportunity to use up the slightly shrivelled dried-up golden delicious apple languishing in the fruit basket.

We also noticed that there was some rice left over in the fridge. What a perfect opportunity to have Mjdarra! As we pulled brown lentils down from the shelf, we saw that there was just a handful or two of Puy lentils taking up space. Why not use those up?

Sure, it’s probably one of the few times that Puy lentils have been used to make Mjdarra. But it certainly wasn’t a mistake.

And rather than adding bhar (a spice mixture primarily made of cloves, cinnamon and nutmeg) or allspice as we have done in the past, T decided to add ras-el-hanout instead. Just enough to add flavour but not so much that it took over.

And the fuhl was one of the best fuhls we’ve had yet. (Was it because of using kidney beans?) We also baked pita and grilled eggplant on the barbecue. While T was caramelizing onions and garlic, I grated the beet and apple for beet salad and stir-fried beet greens with onions and fennel seed.

And what a fabulous dinner we had!! From left-overs and fridge rejects!!

Mjdarrah
based on our recipe for Mjdarra (lentils with rice)

» Brown lentils are the traditional legume for mjdarrah but Puy lentils (green French lentils) work just as well and taste pretty much the same. (Some people would argue vociferously that this is not the case.) The Cook’s Thesaurus says that Puy Lentils take more time to cook than brown lentils. We have not found this to be the case. Generally, we have to cook brown lentils for 45 minutes or more. Puy lentils are ready in half an hour.

» Fava beans are the kind that are traditionally used for making fuhl in the Middle East. Apparently, chickpeas are added to Lebanese fuhl. And kidney beans are used to make Sudanese fuhl. But because we are children of the universe, we play fast and loose with what kind of beans to use in our mjdarra and fuhl and just use whatever dried legumes we have on hand. For whatever dried legumes you use, make sure you get them from a store that has a high turn-over in stock. We once bought fava beans that were clearly very old – no amount of cooking would soften them. We ended up tossing most of those dried favas onto the compost heap.

» To help soften them, Anissa Helou suggests adding a bit of baking soda to the soaking water for the beans and then to rinse the beans well before cooking. (We do this with chickpeas.) However, Sally and Martin Stone in their book “The Brilliant Bean” say: “Do not add baking soda (sodium bicarbonate) to the cooking water as some cookbooks recommend. […] Baking soda can actually toughen beans – as does salt – if added to soaking or cooking water. It also destroys some valuable nutrients. […] Baking soda adds so much alkalinity to the water that it affects both flavor and nutrient content adversely. Cell wall hemicelluloses are more soluble in heavily alkaline water. The resulting loss of cell wall material allows nutrients to be leached out of the beans and escape in steam or when the soaking or cooking water is discarded.”

Canned beans (although I confess I’ve never seen canned brown or Puy lentils) can be used as well. Drain and rinse the beans first. The liquid in canned beans is often a bit stinky, murky, and oversalted. 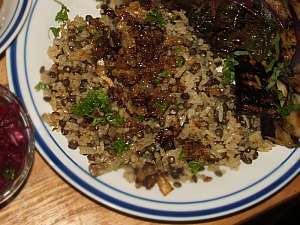 The next morning, T packed up the leftovers from the previous night’s dinner (of course there were leftovers! We made enough for an army) and announced that we were going to go to the Humber River for a picnic breakfast because he wanted to show me something. “What?” I asked. “You’ll see, it’s something I saw on the news… it’s really cool. If it’s still there.” So at 9:00, we got on our bikes and headed over in the bright sun towards Baby Point and got on the Humber trail at the same point we had accessed it that time when the spring ice was blocking the path.

All the barbecue pits are gone, as well as most of the picnic tables. But there are plenty of benches facing the river. We almost chose a bench in half-shade but went around one last corner hoping maybe just maybe to find a bench in full shade and there they were. Two forgotten picnic tables under the trees in the same spot we always have our picnics when we go to the Humber. The barbecue stand is gone but the tables are there. And we sat down under the shade, spread out the table cloth (okay, it wasn’t a table cloth; it was a ratty old tea towel) and had the most amazing feast made from leftovers from dinner the night before (click on image to see larger view of the dinner): fuhl (pate made with kidney beans, caramelized garlic and olive oil), mjdarah (rice and lentils with caramelized onions), grilled eggplant, pita (we’d cooked them on the barbecue) and a big thermos of tea. We had MEANT to bring left-over beet salad but forgot it in the fridge. It didn’t matter. There was plenty and it was the perfect breakfast.

And so we sat under the trees, revelling whenever a light breeze riffled the leaves, listening to the birds calling, watching the river and people biking, running (who runs when it’s 28C???), and walking with their dogs on the paths on either side of our little island.

Breakfast was delightful, but I wanted to see whatever it was I was supposed to see! So we packed up our things and continued south over the hump to where the ice jam had been two winters ago.

Of course, there was no ice jam now. Just green grass and trees. And the summer shallow river sparkling as it ran over the rocks. Humber River Rocks! (Please read more here)

Susan (The Well Seasoned Cook) created this event to celebrate and expand our legume repertoire. She wrote:

This month, Simona (briciole: “An idiosyncratic and opinionated dictionary of Italian words related to food, with audio accompaniment – and recipes”) is hosting MLLA. She wrote:

Annuncio: legumi che passione! (numero 26) My Legume Love Affair #26 […] Participation in the event revolves around a recipe that showcases one or more legumes, be it savory or sweet, with or without meat – no restrictions. The legume (or legumes) must be one of the main ingredients, not a minor character.

And yes, there are two prizes being offered!! Random Drawings from the MLLA#26 post will be taken and the prizes will be

1.) You wouldn’t believe how we came by the beet greens! The previous day, T was buying lemons to make Sangria. The woman in front of him in line was buying beets and asked the checkout girl to cut off the greens. The girl called out, “Does anyone want these greens?” and T quickly yelled out, “I do! I’ll be the hero of our house if I come home with beet greens!” (And so he is. I ADORE beet greens!!) Several people in line, including the woman buying the beets, said, “I didn’t know you could eat beet greens! How do you cook them?” He explained, worried that the woman was going to want her beet greens back but she just said, “Interesting!! I’ll have to try that sometime.” And so, back home he triumphantly returned carrying a big bouquet of stunningly beautiful beet greens. How lucky am I? (And how lucky is he to be married to someone so easily pleased? :-))

edit: Simone has posted the MLLA #26 roundup. There are so many lovely entries that she has divided it into two pages:

5 responses to “raiding the icebox to make mjdarra (MLLA #26)”