Well, RATS. I really thought I had a chance this time. But, you guessed it, I remain a 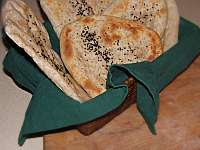 I was so thrilled when I saw that the BBBabes made naan! I can make naan!!! I make naan all the time. And I did make naan.

Alas, no Babe status for me though. Here’s why:

Wahhh! I’ll NEVER be a Babe! Here I am destined to remain the curmudgeonly neighbour peering into the BBB’s windows when I think they’re not looking.

Perhaps you’re wondering (if you’re still stoically reading on) why I refused to use the BBBabe’s naan recipe. It was because of the raisins and the curry powder. I have a horror of curry powder. All that turmeric.

I know. I can make my own curry powder. And I do.

Naan is supposed to be neutral. To be a nice contrast to the complex flavours of the rest of the dinner. Naan’s for sopping up a curry. Or for eating alone to douse the flames if the curry is particularly hot. A curry that might even have raisins in it and maybe some mango chutney on the side.

Happily, the BBBabe’s included a plain naan recipe too. But it didn’t call for any butter. Or yoghurt. And it was brushed with olive oil. With caraway and cumin seeds on top. What??

And then there was the cooking method. Hollywood says to bake the naan in a skillet on the stove top. Using the stovetop is not what made me gasp though. It’s that he said to add a splash of olive oil to the pan.

Oil in the pan? For baking naan? How unnecessary is that?

Okay. Sorry for yet another outburst.

Let’s get real. Who do I think I am, anyway?? I’m neither Persian, Pakistani or Indian. I’m a WASP who has been to India, but having spent only 4 weeks of my life in just a handful of places in the north, I can’t really pretend to know everything there is to know about the various naans that are made in the Subcontinent.

I asked the resident expert, who lived in India for several years and also travelled through Pakistan and Iran. (He’s eaten a LOT of naan.) He looked at me as if I were crazy and assured me that he’d never had naan with curry powder in it and that he sometimes saw seeds on naan but that they were kalonji (aka nigella seeds).

I looked again at the BBBabe’s recipe. And googled the recipe author, Paul Hollywood. Who is this guy?

Aha. An Englishman. Not Indian. But maybe he spent a lot of time in India too….

Because maybe I was wrong. (It can happen. I think I’ve been wrong once before. Maybe even twice.) Maybe naan can be made with curry powder, raisins and no yoghurt.

So I looked in the Indian/Subcontinent cookbooks on our shelves to see what ingredients were called for.

Not all of our Indian cookbooks had recipes for naan, including the one that I thought might play fast and loose with the ingredients: the Indian/European fusion with a definite slant towards Indian, “Vij’s Elegant & Inspired Indian Cuisine” by Vikram Vij and Meeru Dhalwala. I’ve only dined at Vij’s once and as far as I recall, the naan were delicious but like most naan I’d had before (no curry powder or seeds on top). The book does mention naan, of course. But only with the following disheartening words in the “Staple Ingredients” section at the beginning:

Naan […] originates from Central Asia and there are slight variations to it, depending on where it is eaten – Afghanistan, India, Iran or Pakistan, to name just a few countries. […] [I]n India it is round and mostly made in a tandoor. At Vij’s, we don’t use a tandoor to bake our naan and it is a labour-intensive process. Since it’s not easy to make naan at home, we suggest you buy it premade from Indian grocers.

Hmmmm. I’m not so sure about the labour-intensiveness of making naan. Personally, I find that it’s one of the least labour-intensive breads to make. But I’m not running a restaurant and having to provide naan for several diners over the course of a whole evening.

Here’s what Madhur Jaffrey has to say about naan:

Naan is a leavened flatbread shaped like a teardrop. It is best when cooked in the clay oven called a tandoor. While meats, chicken, and fish broil on large skewers inside the tandoor, moistened naans are stuck to its walls to bake.

Of the several cookbooks we have, these ones had recipes for naan:

Alford and Duguid also had a definition of naan in the back of their book:

Naan […] is the Central Asian word for “bread”. In South Asia, it has come to mean the leavened tandoor-baked flatbreads that evolved from the breads brought to the Subcontinent by the Moguls.

Using the above definition, I must backpedal and apologize profusely to the BBBabes and Paul Hollywood. It seems that naan is just another word for bread. If people like the idea of putting curry powder and chutney into their bread, why shouldn’t they?

However, being the purist that I am, I made our usual recipe. But with a bow to the BBBabes, we sprayed the shaped bread with water and sprinkled on kalonji before baking the bread on a stone in the oven.

We have, however, made naan on the stovetop on an UN-oiled tava (cast iron frying pan would work too), directly on the grill of the barbecue, and on the stone in the oven. Our favourite naans are baked in the barbecue. But only by a mere fraction are they our favourites; the others are delicious as well.

In “Flatbreads and Flavours”, Jeffrey Alford and Naomi Duguid describe how to bake bread using an overturned wok placed over the gas burner on the stove (I don’t have a copy of that particular book; I borrowed it from the library – it’s on my “want list”). To get an idea of what they describe, take a look at this photo of a Calcutta street vendor using this technique.

We haven’t tried using the upsidedown wok method but that’s the thing I love about making naan; it CAN be made on the stovetop, in the oven, on the barbecue. It’s wonderful!! And definitely easily made by the home cook!

Here is what I did to make the most recent naan:

:: Tap water is fine to use – just make sure that it has stood for at least 12 hours so that the chlorine has dissipated. Under no circumstances should you use water from the hot water tap; why tempt fate?* Heat the water in a kettle or microwave and add cold water until it is the correct temperature, (use the baby bottle test on the back of your wrist – your fingers have no idea of temperature!) Or you can use a thermometer. The temperature should be BELOW 120F because yeast begins to die when the temperature is higher than 120F.

:: In the summer, I mix the dough around 2 or 3 PM and it has risen by about 6PM. In winter (our kitchen is ridiculously cold), I mix the dough in the morning, leave it on the counter to proof and it’s ready to shape by evening. I’ve never tested this but I can’t see why you couldn’t mix and knead the dough in the late evening and stick it in the fridge overnight to rise so you could bake it in the morning to have with green chili omelettes. If you try this, leave it out on the counter for at least 30 minutes before putting it in the fridge and then bring it out and let it come up to room temperature before shaping (probably would do that in the time that you are preheating the oven). 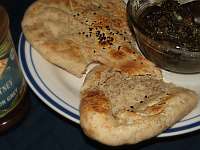 And it’s wonderful with kalonji seeds!

There. I used all the ingredients.

I know I’m late with my entry. I do hope I haven’t managed to alienate all of the actual BBBabes with my ranting and raving. And even though I know I’m a whining BBBrat, in my heart of hearts, I still feel like a BBBabe….

After Christmas, I felt as if all my creativity had been squeezed out of me, leaving me flat. […] I got tagged to pick the bread of the month for the Bread Baking Babes. So I picked Naan.

The challenging thing about Naan is that all the cookbooks preface their recipes with how you can’t replicate the true cooking method of slapping the naan against the super hot walls of the specially-built clay oven. Well, I don’t have that oven, but I don’t think that lack makes it naan-negotiable. I used my cast iron skillet. A bit naan-traditional, but it worked. […]

If you’d like to bake along and receive a Baking Buddy Badge to display on your site, bake the naan and post it before the 25th [January 2010]!

Take a look at the Bread Baking Babes’ naan: