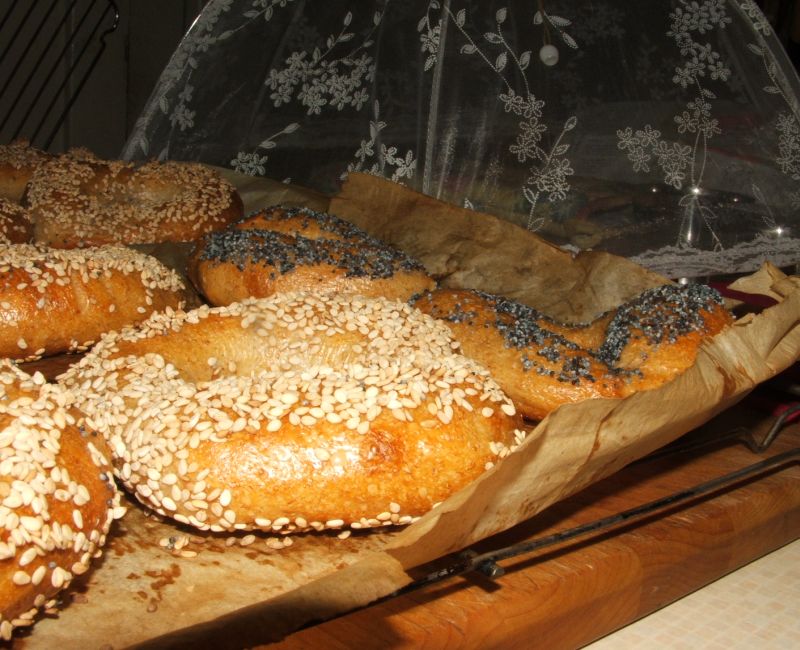 The bagel, in its peripatetic history, has moved from the shtetls of Eastern Europe to the delis of the United States […] [H]owever, most people’s idea of a bagel seems to be of a vaguely squishy unsweetened doughnut, possibly with some sort of godawful flavoring mixed into it (with the “blueberry bagel” being perhaps the most offensive), generally purchased in lots of six in some supermarket… possibly even frozen. These are not those bagels.
These bagels are the genuine article. These are the bagels that have sustained generations of Eastern European Jewish peasants, the bagels that babies can teethe upon (folk wisdom has it that the hard, chewy crust encourages strong teeth), the bagels about which writer and humorist Alice Kahn has so aptly written that bagels are “Jewish courage.”

For the past few months, I’ve been obsessed with thinking about how bread used to be made.

In “Oxford Encylopedia of Food and Drink in America”, Andrew F. Smith wrote: Commercially produced yeast first appeared in the United States in the 1860s [and by] the early twentieth century factory-produced live cake yeast was widely available. And it wasn’t until after WWII that dry yeast appeared on store shelves.

This means that it seems very likely that those people from the Eastern European Shtetls captured their own yeast. I can’t imagine that they had supermarkets stocked with packages of yeast in their villages….

I am neither Jewish, nor did I grow up eating bagels. But I am definitely a purist where bagels are concerned. I can’t stand the commercially produced soft buns with holes in them. I’m not even that crazy about the so-called Montreal-style bagels that are sold by the fancy coffee shop down the street.

In fact, aside from the bagels I ate in NYC, unless we’ve made them ourselves, I have rarely have tasted a decent bagel here.

I see from my notes that I’ve supposedly made wild bagels before in 2008. But looking at the recipe I used, they were not really wild. Because I added yeast!!!

I was tempted to use only wild yeast as a rising agent but then at the last minute, I caved and decided to add just a tiny bit of commercial yeast.

-me, blog from OUR kitchen | wild bagels

So, this time round, armed with Jane Mason starter begun last July 2017, I made Real Purist’s wild bagels. After all, what purist bagel maker in her right mind would use commercial yeast?

The only other real decision I had to make was whether to use poppy or sesame seeds. Leaning towards poppy seeds, I decided to consult with the resident taster:

me: Do you want poppy seed or sesame bagels?
he: Poppy seed!
me: [private sigh of relief] Okey dokey! Poppy seed it is!

And after all that, we didn’t have nearly enough poppy seeds. I felt like Old Mother Hubbard.

So. Back to Plan B. Sesame seeds it was!

But, whether they have poppy or sesame seeds, it doesn’t seem to matter. Now, those are Bagels! 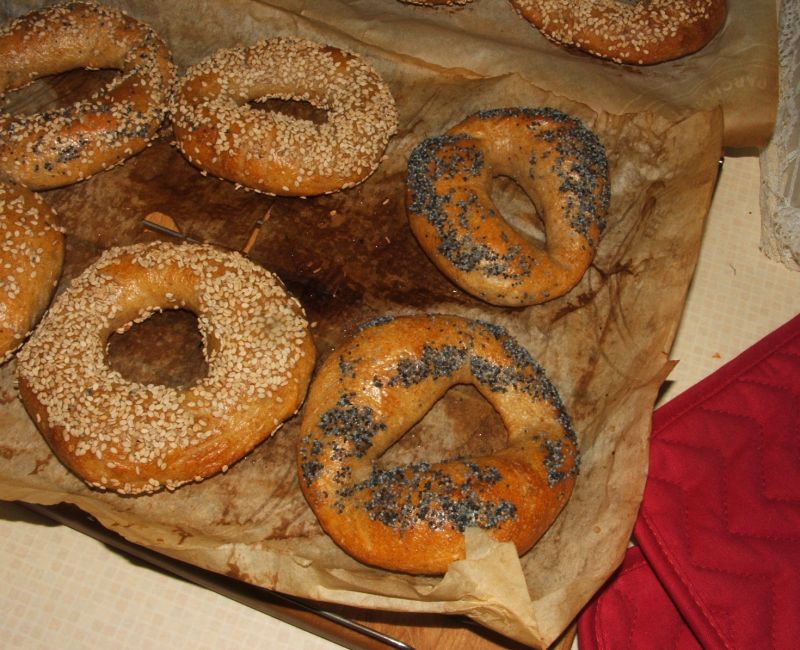 Here is what I did to make these wonderful wild bagels:

Serve the bagels with butter. And/or cream cheese. Or goat cheese.

And smoked salmon. Or apricot jam.

:: Salt Even if you don’t weigh other ingredients, I urge you to weigh the salt. For more raving about this, please see Salt is salt, right?

:: Starter The starter is a 100% hydration, liquid levain. It takes about 5 days to create. (Please see our take on Jane Mason’s Natural Starter made with 100% Whole Wheat Flour.)
:: Water Tap water is fine to use – just make sure that it has stood for at least 12 hours so that the chlorine has dissipated. However (and I’ll keep saying this until the cows go home), under no circumstances should you use water from the hot water tap. Water from the hot water tap sits festering in your hot water tank, leaching copper, lead, zinc, solder, etc. etc from the tank walls and pipes… the higher temperature causes faster corrosion. Of course, saying that it is unsafe to use water from the hot water tap might be an urban myth, but why tempt fate? Heat the water in a kettle or microwave and add cold water until it is the correct temperature (use the baby bottle test on the inside of your wrist – your fingers have no idea of temperature!)
:: Flour Please note that strong bread flour is best for bagels. While all-purpose flour CAN be used, the results are more like buns with holes in the center, rather than bagels, ie: not Real Purist’s bagels. Here’s how to mimic bread flour. (High-gluten flour – aka vital wheat gluten – is readily available at health food stores.)
I found that replacing the high-gluten flour in my usual sourdough bagel recipe with a mixture of 97% flour (the regular flour I use for bread) and 3% vital wheat gluten gave me a bagel that was virtually indistinguishable from the original.

With warmer than usual temperatures, by the day after we baked the bagels, all the snow had melted and there was a window of opportunity to ride to our favourite fish store to get beautiful hot-smoked salmon. The store has traditional cold-smoked salmon (lox) too. But we love the texture of hot-smoked fish, so that’s what we got. 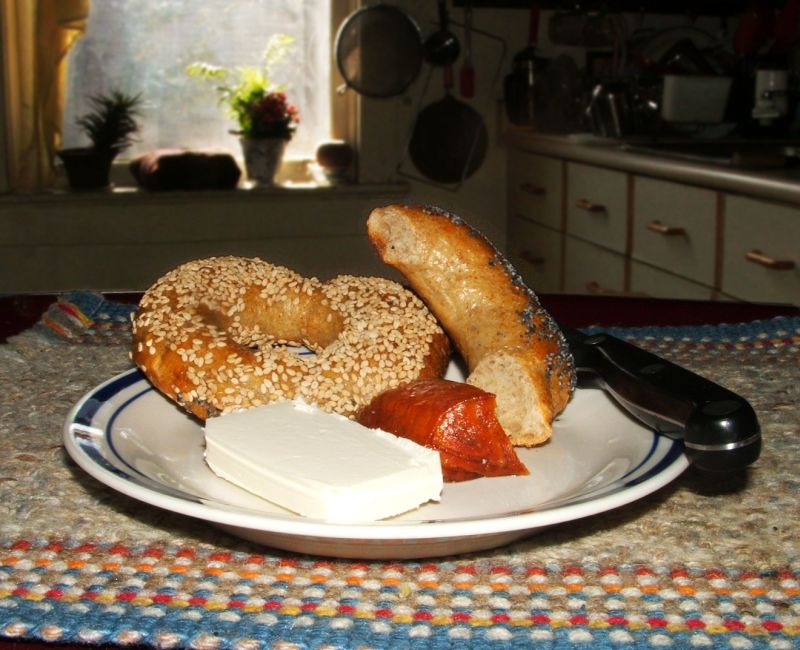 Wow. These bagels are great!

There almost so great that I didn’t really notice the unseasonal snowfall last night and the still chilly temperature in the kitchen….

What is going on??

We went to our giant supermarket to look for poppy seeds. Nope. No poppy seeds at all. Are they forbidden now? Is there too much opiate in them??

At the same time, we tried to get more dried thyme leaves. Because fresh thyme isn’t growing in our garden right now. And what did we find on three different supermarket shelves? 1. No thyme; 2. Thyme powder; 3. Organic dried thyme leaves marked up to a ridiculously high price.

Sure, it’s pretty. But my bicycle is calling to me…. 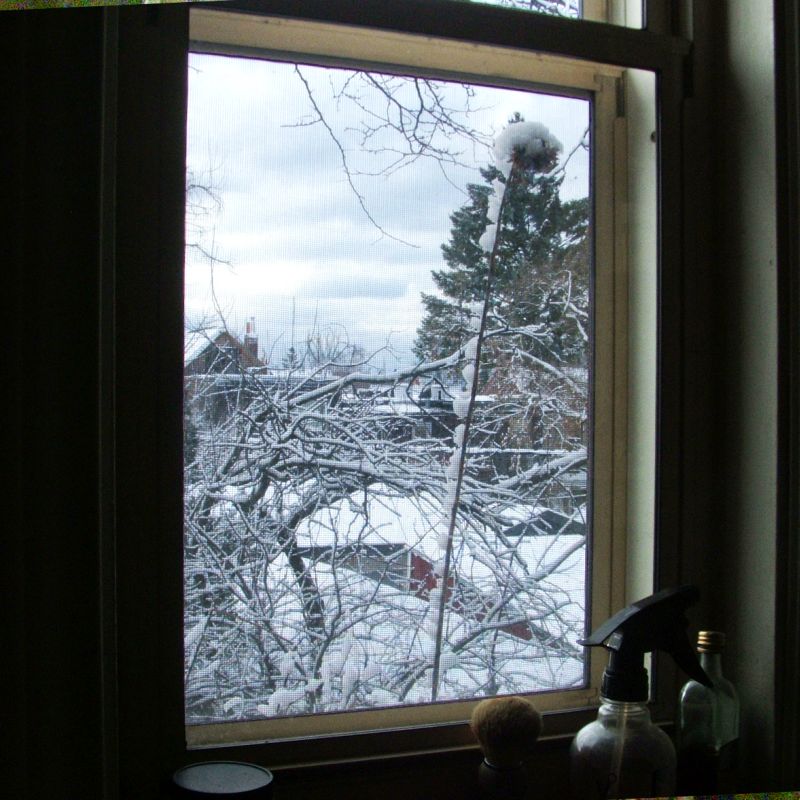 Last year’s sunflower in the herb garden on the deck
Who knows if the thyme survived? It’s hidden under the snow.