summary: Really White Bread, following the recipe for White Bread with Poolish in “Flour Water Salt Yeast” by Ken Forkish – to the letter; wow, that’s slack dough; hazards when halving the recipe; using instant yeast for the first time; I am a slow learner;

Here’s a tip: instead of relying on your terrific steel trap mind, when halving a recipe, write the new numbers down…. 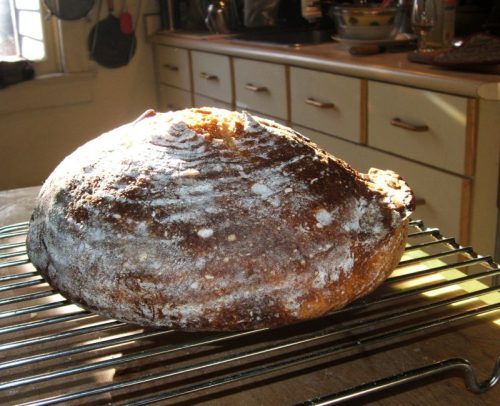 I know. I’m supposed to be reporting about our BBB Lussekatter right now! But I couldn’t not talk about using commercial yeast for the first time in ages. And not our usual kind of yeast; I used instant yeast. Because so many breadmakers say it’s better. Also, there was a special request for white bread. White bread with no grains or seeds or lumps.

I decided to make a half recipe of Ken Forkish’s White Bread with Poolish. 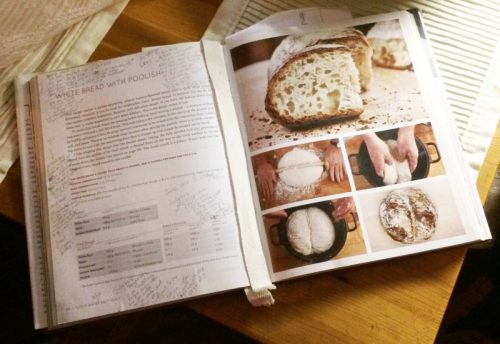 Over the years, I have made this recipe several times, with a few variations: adding a little whole wheat flour, then adding some barley malt, then a little wheat germ, but never using just all-purpose flour. Each time, I’ve made pencil notes. Each time, we have rated each variation; the ratings vary from 9 to 9.9 out of 10.

This time, as per the request, to make the bread, I used only unbleached ‘no additives’ all-purpose flour, water, instant yeast, and seasalt.

It took ages to put together the poolish! I had to get out TWO scales – the regular one that goes down to 1 gram, and the little one that measures to a hundredth of a gram (because I was adding 0.2 grams yeast). I also had to heat up water in the kettle to rehydrate the yeast. Then, as I was stirring the now slightly gluey all-purpose flour, water and yeast together, I remembered that I DON’T have to rehydrate instant yeast. I covered the bowl with a plate and put it into the oven with everything turned off. I didn’t want it to over-rise.

The next morning, the poolish was wonderfully and perfectly lofty. It smelled like nothing.

Mixing the rest of the dough, because I’m an expert, I didn’t feel the need to follow my own instructions about water temperature. Even though it has become ridiculously cold in the kitchen now that winter has set in….

I sifted the flour, dumped in the yeast, then poured in water from the kettle that had been sitting in the cold kitchen overnight.

[I] have always advocated doing the “baby-bottle” test for measuring ideal temperature for rehydrating yeast.
I have also, in the past, played fast and loose with the water temperature – thinking that cold water would work just as well as warm. The only thing I was careful about was that the water was never too hot. But I have never been careful to ensure that the water wasn’t too cold.
So, the other day as I mixed sandwich bread dough, I actually used a thermometer to measure the temperature of the water. […] The resulting sandwich bread was better than ever.

The dough was white white white. It was gloppy. It was cold. It smelled like nothing. It was white. (Oh, did I say that already? Sorry.)

Rise, it did! That’s commercial yeast for you.

But, boy oh boy, was that ever slack dough! I did not remember our slightly revised version (by adding some whole wheat flour) of Forkish’s White Bread with Poolish being SO slack.

Pre-shaping and shaping was not exactly a breeze. T had difficulty flopping it into the brotform. I didn’t dare use the lame to score it. Scissors were the only viable option!

It took ages to bake. We left it on the counter overnight to cool. The next morning, we decided to bake it some more. It just didn’t look like the photo in Ken Forkish’s book. It was too blonde. And it smelled like nothing.

Back into the oven it went for another 20 minutes.

Suddenly it looked gorgeous. Who cares about the section that hit the rim of the hot combo-cooker when it was flopped in just before baking? 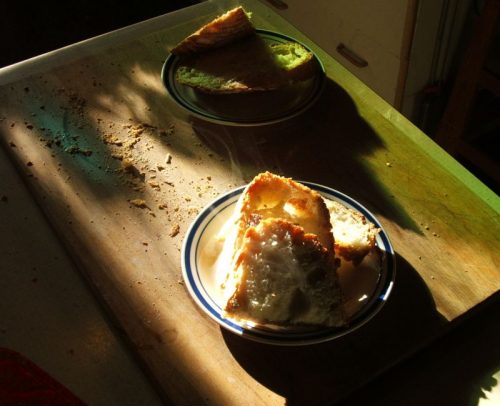 But why oh why had the dough been so so slack?! T kept asking if I had put in more water than usual.

And then, with a fair amount of prompting:

He: Are you sure you didn’t add extra water?
Me: Yes.
He: Are you positive? The dough was really sloppy.
Me: NO. I followed the recipe to the letter. Without any alteration. Exactly. Except to halve it so it would make one loaf instead of… Ohhhhhhhh!! [pained sigh] Is it possible that I didn’t halve the water for the actual dough?

And the truth finally dawned on me. Yes. That’s what happened. I had not halved the amount of water for the actual dough.

This recipe makes a palate-sparkling, almost buttery-flavored bread with a thin, crisp crust.

Our White Bread with Poolish looked good. In spite of its stark whiteness. We loved the sunlight streaming in through the window. We loved the steam wafting from the bread. 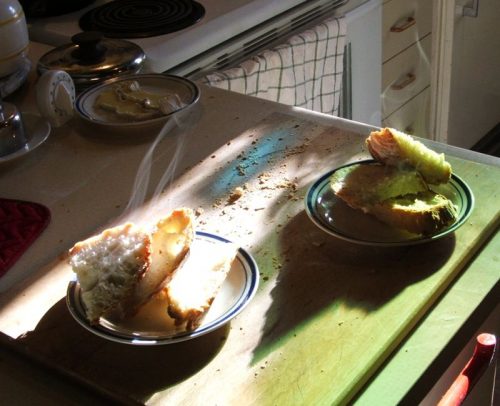 But, it sure is white. And it smelled like nothing…. As for “palate-sparkling, almost buttery-flavored”, alas no. It is like bland cake. 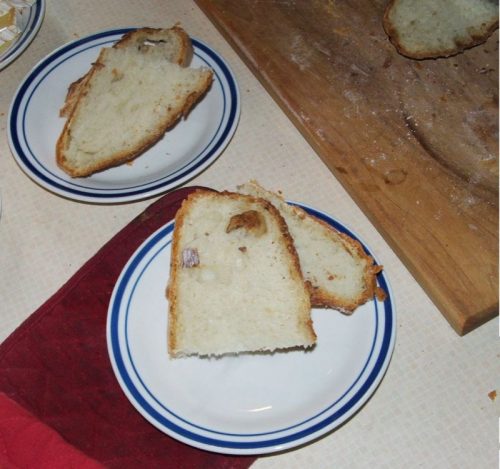 That’s it. I’m going back to using our Jane Mason starter! I can’t quite believe I’m saying it, but it’s WAY easier to use than commercial yeast.

I will also remember use a thermometer to check the water temperature when mixing the dough….

For all my breads, I’ve achieved the best flavor when the freshly mixed dough has a temperature between 75°F and 80°F (24°C and 27°C). […] When you’ve mixed your final dough and are about to cover it for rising, or bulk fermentation, take a temperature reading with a probe thermometer. If the dough doesn’t fall between 75°F and 80°F (24°C and 27°C), you should make adjustments next time.
To control the temperature of the mixed dough, you need to work with four variables: water temperature, flour temperature, room temperature, and the length of the autolyse […]. The easiest variable to manipulate is the water temperature.
[…]
[B]read we make at my bakery tastes so good that sometimes I just keep eating it even when I’m not hungry. I love this bread when it’s at it’s best. But here was a period when that bread tasted just ordinary, and I figured that it probably wasn’t getting the full amount of fermentation it needed to completely develop its flavor. […] Manipulating time wasn’t an option, so my choices were to play with one of three other variables: the amount of leavening in the dough, the ambient temperature of the bulk fermentation stage, or the temperature of the dough after its final mix. I decided to experiment with the latter and mixed the dough with water that was 3°F (about 2°C) warmer than what we had been using. Whereas our dough had been coming out of the mixer at 75°F (24°C), with the warmer water the finished dough was at 78°F (26°C). All of the other variables remained the same. The next day the bread was just as it should be: complete, full of flavor, and not sour, with just a gentle background tingle in the mouth.