One of my sisters is in town on business. Happily, she was able to set aside business yesterday evening and came to our house to dine. Another sister and brother-in-law joined the party. We sat outside while T grilled minted meat patties on the barbecue. Then we came indoors to have the patties with perfect basmati rice with butter, dahl and steamed green and wax beans. This was followed by a brand new dessert idea (well, brand new, for us anyway).

click on image for more photos of red chili syrup 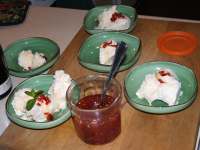 We first got the idea for making red chili syrup after watching an episode of Nigella Lawson’s “Forever Summer”. No recipe was given but it didn’t seem like it would be too difficult to duplicate. We have no idea if the following is even close to Nigella’s. But we don’t care because what we made is really good.

Serve overtop of vanilla icecream. Garnish with sprigs of mint if you have them.

click on image for more photos of red chili syrup 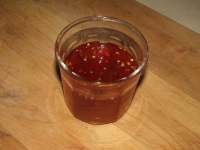 The syrup is beautiful, don’t you think? The cayenne peppers that we used were particularly hot – hotter than we expected. And the resulting syrup was unbelievably hot.

Consequently, when we served it, even though none of us are strangers to spicy food, we only put a little on each bowl of ice cream. And it was remarkable! The icecream completely dissipated the fire of the chillies. One sister at the table exclaimed that this was the first time she had actually able to taste the flavour of the chillies – and she has eaten plenty of spicy food.

And she was right. The slightly citrus flavour of the chillies sprang out. I also loved the chewy raisiny quality that the chillies took on.

Everyone raved. We fetched the syrup jar from the kitchen so people could add as much of the syrup as they wanted. This dessert is definitely a keeper. Thank you, Nigella!!

(Ha! We thought we had made too much syrup… but we’ll need to make more syrup for the next time!) 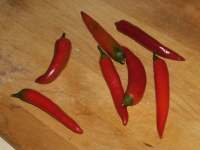 While it’s unlikely that anyone would argue about the spiciness of fresh cayennes, they aren’t strictly spices, especially if the seeds have been removed.

edit @ 15:17 EDT: I was just looking at Barbara’s rules (scroll down the linked page to find them) and see that perhaps this post might have fit into the event after all:

[T]he definition of a spice that we will be using for the purpose of this event is as follows: “Any aromatic substance, fresh or dried, that is derived from the root, rhizome, bulb, bark, woody stem, flower, fruit or seed of a plant that is used to flavor foods.”

But my official Spice is Right II post is already half written… so stay tuned.