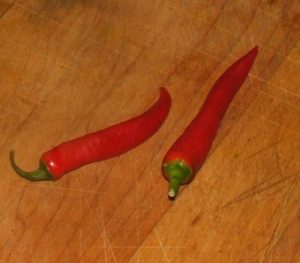 The chilis are always redder and hotter on the other side of the fence. Aren’t they?

Happily, there IS sun two doors over. Even more happily, the peppers that our neighbour planted are prolific and far hotter than he had planned. He has invited us to help ourselves.

So, the other day, we took about 8 bright red chilis. And tried one.

Oh my!! Just cutting into one of them sent out hot hot hot hot fumes. I’m tearing, just thinking about it. But we tasted the chili anyway.

But just behind the heat was the most lovely citrus flavour. We can’t believe our luck! 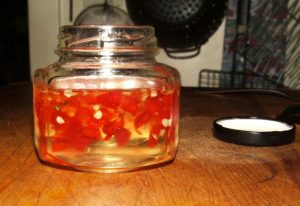 We thought about things we should try with J’s insanely hot chilis…. Suddenly we remembered the Red Chili Syrup we had made eons ago.

How could we have forgotten?! It was fabulous.

We already had some beautiful frozen yoghurt in the freezer (remind me to post T’s recipe!) so into the kitchen we raced, to make a simple syrup. Gasping, T chopped a couple of chilis to toss into the hot syrup. As soon as the chili pieces were floating merrily in the syrup, looking beautifully red, we wondered if maybe they shouldn’t have been chopped more finely. Those chilis are h{gasp}o{gasp}t 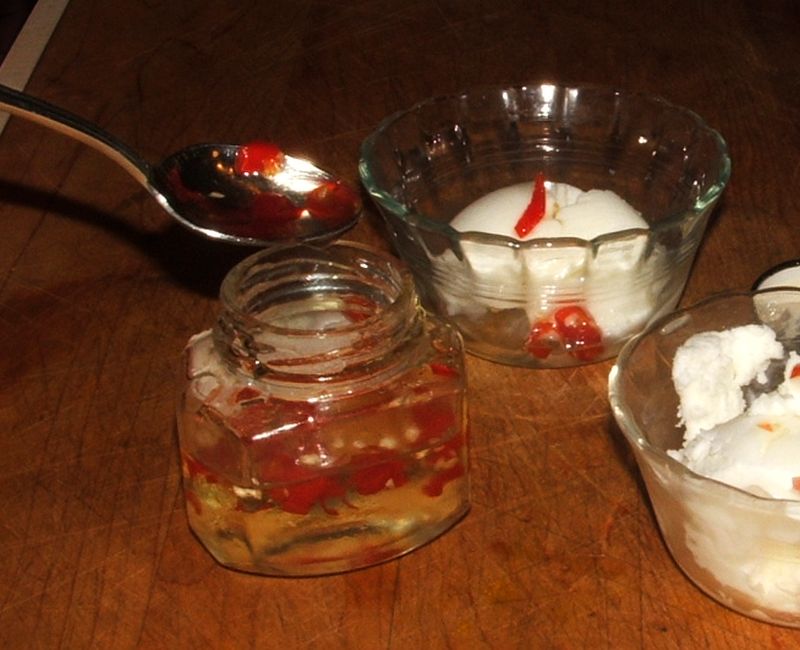 And you think you know where this is going, don’t you? You think that we are doomed to live with horrifying blisters on the insides of our mouths for the rest of our lives. 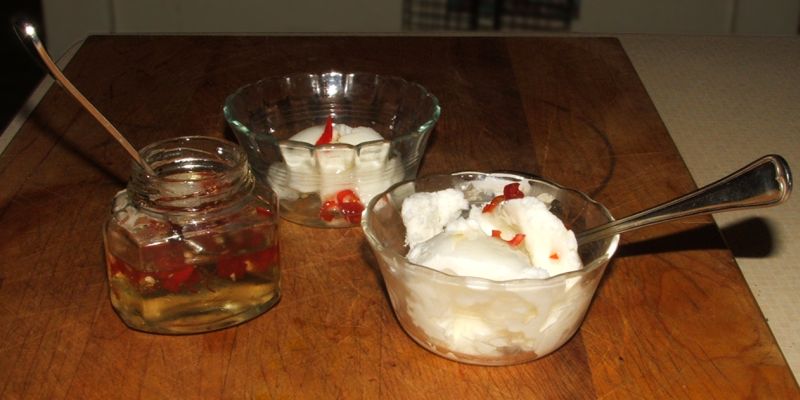 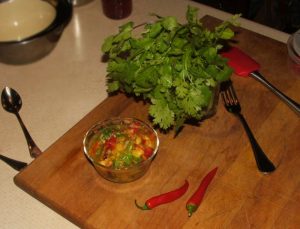 We also made some conventional things with the chilis: a fabulous Poblano-style mole and salsa. We could have made tomato salsa but when we went to buy tomatoes, the peaches at the market called to us.

Granted, the peaches were on the unripe side (read: rock-hard) Don’t get me started on speculating why the Niagara farmers (only about a two hour drive from here) would pick their peaches so green. Don’t let me continue raving that even peaches at road-side stand directly beside a peach orchard are rock hard as well….

Ooops. Excuse me… we’re speaking of peach salsa and J’s chilis, aren’t we?

We don’t have very many Mexican or South American cookbooks, but we consulted the two books we do have: “Salsas and Ketchups” by Silvana Franco, and the California Culinary Academy’s “Mexican Cooking (Easy & elegant meals)” by Vicki Barrios Schley.

And then, in typical fashion, as I was going through the index of the first book off the shelf, T just shrugged and said he’d throw something together.

The resulting salsa wasn’t far off from the corn salsa we made (actually following the recipe) in “Salsas and Ketchups” by Silvana Franco.

Yes… With added onion, lemon juice, and a tiny bit of sugar, the peach flavour came through beautifully. It was peachy. In spite of the insane heat from J’s wonderful chilis. 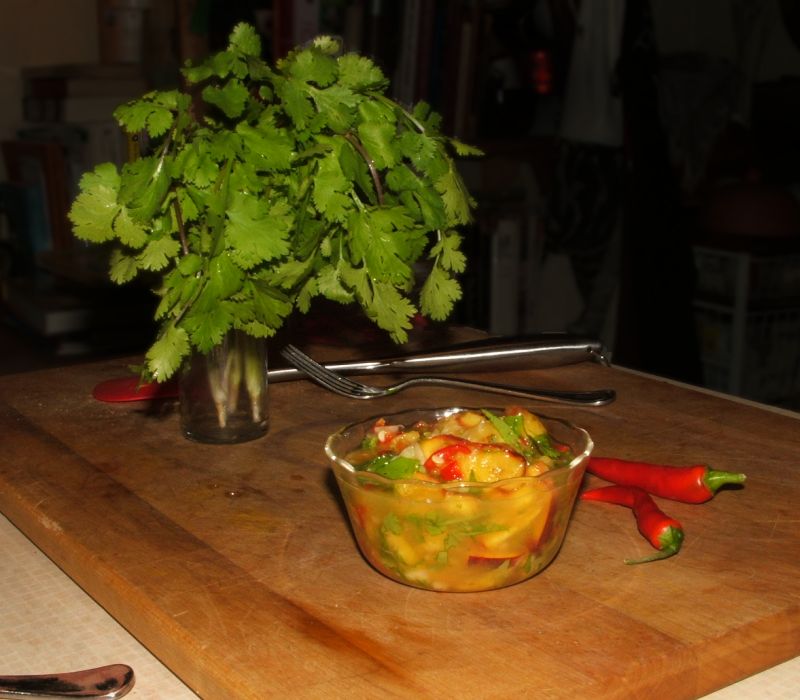 And like the chili syrup, it too was fabulous.

The next time we saw our neighbour, as we reported the wonders of his chilis, we salsa-ed! How could we not?

edit 1 September 2017 We took a small container of the chili syrup over to our neighbours so they would be able to taste the wonders of their beautiful red hot chilis on ice cream. I opened by saying that a little goes a long way. J looked pleased but I could see the whites of his eyes as he assured me that at least some of them would be sure to try the syrup. I tried to reassure him, telling him that I couldn’t eat the chilis the way T can. But we’ll see. I wonder if his intrepid daughter-in-law, whose parents are from Goa, will be the only one in the family brave enough to try….

Kitchens of the Great Midwest by J. Ryan Stradal an excerpt from the CHOCOLATE HABANERO chapter:

[Eva] escaped in her mind to her chile plants, resting on a rock wool substrate under a grow light in a bedroom closet, as much a prisoner of USDA hardiness zone 5b as she was.
Unlike her, they were beautiful in a way that God intended. The tallest chocolate habanero plant came to her waist, and its firm green stalks held families of glistening, gorgeous brown chiles at the end of its growing cycle. Holding them, tracing her finger around their smooth circumference, she could feel their warmth, their life, and their willingness to give.
[ . . . ]
[A] little before midnight, she licked the cinnamon and sugar and her chocolate habanero pepper powder off of her fingers all at once, feeling the severe, pleasant burning on her lips and mouth. […] [T]he main reason she began growing increasingly hot exotic peppers was to find something with enough capsaicin to release the endorphins that became more and more inaccessible with increased heat tolerance. She wanted to feel lava blossoming in her eyes and nose and mouth again, like the first time she ate a regular habanero […] She cleaned out her last teaspoon of chile powder in the jar with a wet finger, put it on her tongue, and […] as she lay on her bed, closed her eyes, felt the angels in her blood begin to sing