summary: recipe for rhubarb pie; includes recipe for pastry made with lard; high cost of local and/or organic ingredients

Jennifer (The Domestic Goddess) has asked us to share a “favourite Canadian confection, indulgence, dessert, sweet… anything really! As long as says Canada” and we “can get some sort of Sugar High from it“. I realize that I’m one day late, but here it is anyway, my post for

When I was growing up (in Alberta), one of my favourite things to do would be to go out to the back garden to pick rhubarb. 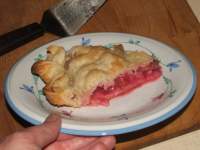 When I was in highschool, as soon as the rhubarb was growing well, I would take rhubarb stew for lunch. My friends and I would sit in the bleachers and invariably one boy would appear to beg for my rhubarb stew. (No, he wasn’t flirting; I was way too uncool to be flirt-worthy. He just wanted the rhubarb stew….)

But of course, rhubarb isn’t just for stew. It makes the best pie. I think rhubarb pie has to be my favourite kind of pie.

Even though rhubarb grows very well here in Ontario in every garden except our shady garden (trust me, I’ve tried to coax it into growing here), if we want pie, we have to buy rhubarb.

The rhubarb here in Ontario is much redder than Mom’s rhubarb. Rhubarb here has red stalks. Mom’s rhubarb was only red at the base. The taste of the Ontario rhubarb is pretty much the same as the green rhubarb of my youth though.

And it really pains me to have to buy it. The price just seems too high*. When you consider that it grows like a weed. And that some people have it growing in their garden and complain that it’s just taking up space. 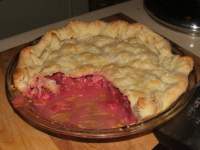 Don’t they know how great rhubarb pie is? Pie!! What is better than pie?

Serve hot or cold, as is, or with ice cream. Serve it for breakfast with yoghurt.

recipes from OUR kitchen – index

Jennifer (The Domestic Goddess) and Jasmine (Confessions of a Cardamom Addict) are co-hosting this event to coincide with the upcoming Canada Day celebrations on 1 July. Jasmine is focussing on the savoury dishes. Jennifer is focussing on sweets because she is also hosting Sugar High Friday; she wrote:

Even though [food] unites us all, it also marks, almost like no other part of life, our varieties and distinctions. I have wondered on more than one occasion what food in Canada tastes like to someone who isn’t me. What does Canada taste like to someone who perhaps didn’t grow up here from childhood, or someone who left here and then returned having experienced other places and other cultures? Or what would it taste like to someone who grew up in the Prairies or the East or West coast of Canada rather than in Ontario as I did…? There are so many diverse food cultures in this country that it seems almost impossible to experience even a fraction of them in a lifetime. […]

[L]et’s make our proverbial pot a little bigger; a little sweeter, if you will. Let’s get together as many bloggers as we can to share their favourite Canadian confection, indulgence, dessert, sweet…anything really! As long as says Canada to you and you can get some sort of Sugar High from it, we want to know about it.

And if sweets aren’t your thing (or you want to make something sweet and something salty or spicy, head on over to Jasmine’s site to participate in the savory version of Mmm… Canada. […]

Let’s take this Canada Day to new gustatory heights! I want everyone to say it with me: Mmm…Canada!

For complete details on how to participate in Mmm…Canada, please go to:

Please read my post for the savoury portion of this event:

High Price of Local Produce
Over the past few weeks, we have been going to the various farmers’ markets around the city. We’re amazed by the beauty. But we’re really amazed by the prices. How is it that it it costs TWICE AS MUCH for a bunch of beets (gorgeous beets!) coming from a farm a few kilometers out of Toronto than it does for a similar sized bunch of beets (very nice looking beets!) coming from a farm somewhere in Texas? Texas is hundreds of kilometers away! So the difference in price can’t have anything to do with fuel costs for shipping….

And how is it that 5 (yes, that’s “five”) organic radishes from the farmers’ market cost the same as a bunch of a bunch containing at least 15 Ontario grown radishes being sold at the vegetable store?

So what is causing the high cost of local and/or organic produce? It can’t be cost of fuel for shipping. Is it simply “what the market will bear”? Are we to be so grateful for locally grown food that we just smile and empty our wallets?

Locally grown and organic produce really shouldn’t be a luxury item. As long as it is, we aren’t going to see any real change in the way that people think about what we are doing to our environment by continuing to rape the earth.

edit 4 July 2008: Whoohoo!! I see that Jennifer has posted the Mmm…Canada/SHF#44 roundup. (Jasmine has also posted Mmm…Canada (savoury edition) roundup.) Take a look at both; there are several wonderful looking dishes!