summary: SAVEUR magazine’s rhubarb mousse; what’s with the price of rhubarb?; great dinner at The Local restaurant on Queen West; (click on image(s) to see larger views and more photos)

If rhubarb grows like a weed, why is it so expensive? 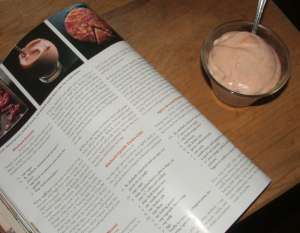 I know I’m like a broken record but I can’t stop saying it: I love SAVEUR magazine!

Whether you’re in Minnesota or Tibet, Missouri or Latvia, England, Alaska, or Iran, rhubarb grows like a weed pretty much anywhere with usable soil and a hard freeze in the winter, which the plant needs to thrive. But now things get interesting again, because at my local farmers’ market, and at all of those in the rest of the snowbelt, this weediness makes rhubarb one of the superstars of early spring. That’s when bundles of rhubarb stalks appear alongside ramps, fiddlehead ferns, and wild watercress. They mark the true end of winter, the beginning of the edible outdoors, the start of local cooking becoming exciting, even exuberant, again.

When I was growing up, we had a giant patch of rhubarb growing near the back of the house. It wasn’t the prettiest looking rhubarb. There was hardly any red colour – just the bottom inch or so had even the barest hint of rose colour.

But its flavour was distinctly rhubarb-like and every spring, we would make big batches of rhubarb stew to serve on ice cream. And of course, there would be rhubarb pies.

As much as I adore rhubarb pie, it was the rhubarb stew that I really loved. I used to take it to school for lunch. We’d sit in the bleachers, unpacking our lunch and whenever I had rhubarb stew, I revelled in being popular for just a moment. Well, not exactly popular. But it was thrilling to be courted.

I don’t know how he knew; he rarely spoke to me at any other time of the year. But whenever I had rhubarb stew, he would suddenly appear, standing just below us offering any or all of his lunch for just a few spoonfuls of my rhubarb stew.

Alas, the days of endless bowls of rhubarb stew are over. Rhubarb refuses to grow in our tiny shady garden (I’ve tried…). Our neighbours are more interested in growing tomatoes and beans. So, if we want rhubarb, we are forced to buy it.

In spring, we see it sold in pathetic little bunches of just a few stalks each for what we think are insanely high prices, considering that rhubarb grows like a weed.

We look longingly at the bunches and wonder if we could use one of the measly bunches to make a small pie. Invariably, we decide to wait.

But Dara Moskowitz Grumdahl’s article made us change our minds. We saw the recipe for Rhubarb Mousse and suddenly, we neeeeeeeded to have rhubarb.

There are in fact a wealth of exciting and exuberant ways you can cook rhubarb: braised in syrup until custardy; baked into rustic upside-down cake; whipped into an elegant rhubarb mousse; juiced into lemonade or ruby-tinted granita.

T pretty much followed the rhubarb mousse recipe. The only changes he made were to omit the vanilla and reduce the cinnamon. Vanilla is wonderful but we knew that it would take over entirely. Cinnamon is wonderful as well, but it too can be quite assertive. 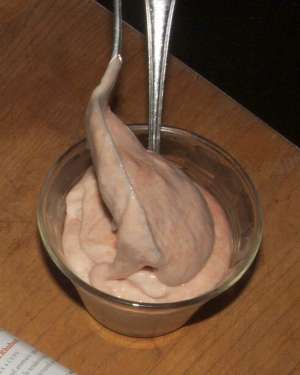 Wow! The mousse was wonderful. It was even more wonderful the following night when the flavour of the rhubarb was a little more pronounced. It wasn’t too pronounced though. The mousse was still delicate – just as mousse should be.

We loved it so much that when there was no mousse left, we raced down to the fruit and vegetable store and bought another measly bunch of rhubarb. But this time, T wanted the mousse to be just a little firmer in texture so he beat in a little softened cream cheese.

We decided to omit the cinnamon as well. The cinnamon was a nice addition but we thought it announced its presence too much and tried to overpower the rhubarb. (Next time, I think we should try adding the tiniest hint of powdered ginger instead of the cinnamon.)

That second batch of rhubarb mousse was even better than the first!

Hmmmm, I wonder if there is any more rhubarb at the store….

Rhubarb was was also featured (in the tiniest, most surprising way) in another dessert we had recently. 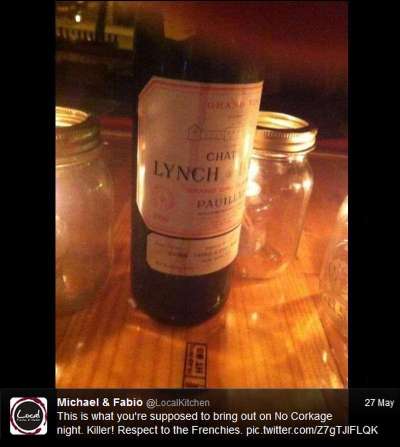 A couple of Mondays ago, we went to the Local Kitchen and Wine Bar (1710 Queen St W) on Queen Street West to have their 4 course Prezzo Fisso.

It was a night of revelations.

Most brilliant: slivered asparagus (raw!) salad with Bottarga, perfectly crisped croutons and lardo (I think it was ham fat – whatever it was was really really good…) all dressed with a very simple lemon and olive oil mixture. It was good on its own but even better with the wine suggested by Michael – Coda di Volpe aged in sherry casks (wild and earthy, with distinct hints of citrus rind and grapefruit)

Outstanding: quail with wild leeks and potatoes – sublime with a bottle of Lynch Bages 1989 we brought from our cellar, taking them up on their “Monday night no corkage fee”. We weren’t the only ones who were thrilled with the wine. The restaurant actually tweeted about it!

Fabulous: panna cotta with minced rhubarb and campari. The sourness of the rhubarb in the slightly bitter campari was the perfect foil for the sweet and perfectly smooth panna cotta. But the biggest surprise:

The rhubarb was raw!!!

1 the thick reddish or green leaf stalks of a cultivated plant of the dock family, which are eaten as a fruit after cooking […]

3 British informal the noise made by a group of actors to give the impression of indistinct background conversation, especially by the random repetition of the word 'rhubarb'. […]