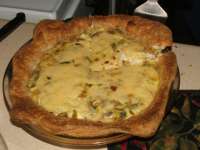 Here at last, as promised earlier, is the post about how T made ricotta leek pie.

I first saw this pie on Dee’s site Choos & Chews and was absolutely wowed. Mostly by the description of her day. I showed T the post and after marvelling at Dee’s superpowers, he immediately said that we were going to try the pie. Dee based her pie on Marie’s (Proud Italian Cook) Savory Vegetable Ricotta Pies.

The pie calls for two things that I’ve never disliked but wouldn’t have gone out of my way to have: ricotta and puff pastry. Because of the pie, all this has changed.

A long time ago (in computer time) I even rashly said that I didn’t like puff pastry at all. (Was that really me??) 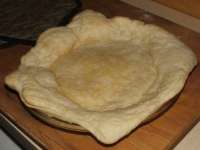 Happily, T ignored me (so what else is new? :-)) and went ahead and made puff pastry. Because he adores puff pastry. And no wonder. You’d adore it too if you could taste the puff pastry he made.

Yup, there’s nothing like butter to make things taste good. 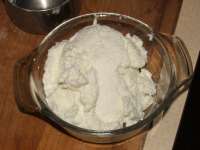 As Dee mentioned, ricotta is ridiculously easy to make. All that is required is milk, lemon juice and salt. The resulting ricotta is wonderfully light and fluffy with a lovely fresh flavour; it is markedly different in flavour and texture from commercially produced ricotta.

Here’s how T made Dee’s pie:

Allow the pie to sit for about 5 minutes before cutting. Dig in.

Notes
Next time we make this, we plan to use Swiss cheese rather than gouda. The gouda was good but it got a little lost. We may also add some smokey ham as well. And maybe a little spinach. And….

* 1 litre is roughly equivalent to 1 quart.

»» edit 9 April 2010: It turns out that the salt is optional for making ricotta. And vinegar can be substituted for lemon juice to separate the milk. (Please see another great use for homemade ricotta: manicotti stuffed with spinach and ricotta)

** Half the people in our household like to drink whey and claim that it tastes wonderfully refreshing (not this half…).

*** As complicated as it may have sounded, puff pastry is very easy to make. However, if you don’t want to make it, of course, you can still make this pie using storebought puff pastry. It will still be darn good. Just try to buy puff pastry that has been made with butter. It tastes better than puff pastry made with shortening. 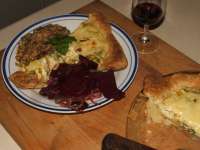 This pie really is brilliant. We can’t thank Dee enough for introducing it to us.

Hmmm, we already have our New Year’s Eve dinner planned but maybe this is what we should have for New Year’s Day!

How about you? When are you going to try it? 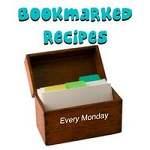 Bookmarked Recipes
Some time ago, Ruth (Ruth’s Kitchen Experiments) created this event to urge herself (and everyone else) to actually make the several recipes bookmarked in various books, magazines and internet pages.

This is now the 35th session for Bookmarked Recipes! (I think.) In the roundup for Bookmarked Recipes 34, Ruth announced that she has changed her mind and she WILL continue the event. However, she would like to hand over most of the hosting duties to others. (I hope that there is a host for this week!) Whether or not, I hope you’ll see why I bookmarked the ricotta leek pie recipe. Perhaps you’ll want to bookmark it too and make your version.

For complete details on how to participate in bookmarked recipes, please read the following:

edit: Ruth has posted the roundup. Do take a look: