recipe: T’s Rogan Josh made with pork instead of lamb or goat

Here it is midweek and I am once again ignoring the calendar; here is my post for 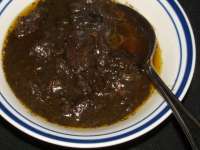 It snowed again last night. A stiff north wind is holding the temperature down.

Not a lot of snow. Probably still not enough to break the record. But enough to cover the sidewalks and roads again and make bicycling pretty much impossible. Enough to make us feel the need for comfort. And nothing is more comforting than Rogan Josh.

A few weeks ago, we were watching “Food Safari” on Food Network Canada and saw a fellow making rogan josh. And T dreamily murmured “I love rogan josh… too bad you don’t like lamb and that goat is so pricey“. And then his eyes lit up as he realized that he could probably make a reasonable facsimile using pork instead of lamb or goat!

Here’s what T does to make his fabulous fake Rogan Josh. Do substitute lamb or goat to make a more correct Rogan Josh, if you like:

Serve with naan, vegetable(s) and pickled onions and carrots.

This is killer good! I love the smell of the two cardamoms! And the taste they lend to a dish as well. There really is nothing so wonderful as cardamom! And even though the black cardamom is still housed in its pod and can be a little grainy and fibrous when inadvertantly popped into the mouth with a spoonful of Rogan Josh, the flavour payoff is worth every moment of mild discomfort.

The first time we made Rogan Josh with pork, we served it with Swiss Chard and naan. We loved the Rogan Josh so much that we made it again a couple of nights later. 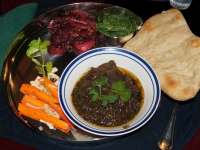 That time we served it with palak paneer, naan, pickled carrots and onions and a beet/turnip dish I threw together at the last minute. (Caramelized onion, fennel and brown mustard seeds are fabulous with steamed beet and turnip slices!)

The second time round, there was a whole other dinner leftover. Instead of making naan again, we turned the leftovers into biryani. And couldn’t decide which version was better. With naan or with rice? 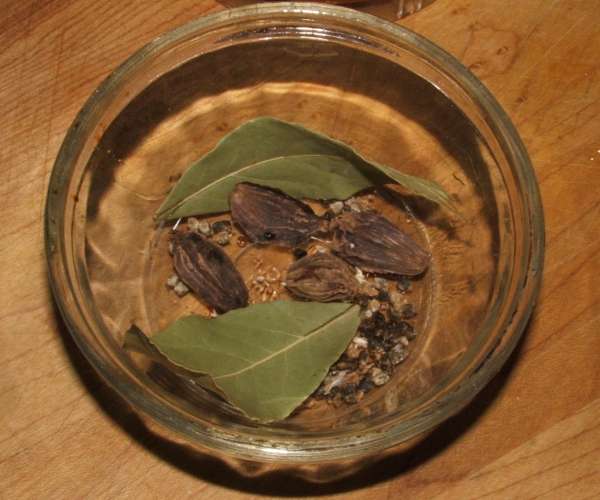 I contemplated featuring Black Cardamom (Amomum subulatum) for this week’s post for WHB, but I just couldn’t bring myself to talk about a spice when there is also an herb that is integral to Rogan Josh. After all, the event is Weekend Herb Blogging…

I love the smell of bay leaves and the flavour they impart to soups and stews. What is so cool about them is that they are initially quite innocuous. It’s only after they have been bruised or cut in half that the wonderful aroma bursts out.

I have been very fortunate with growing my second bay tree (the first one succumbed to a severe attack of scale). The bay has grown so well that I have to drastically trim it every time I bring it back into the house to overwinter so it will fit in our low-ceilinged basement. I just hang the branch clippings upside down in the kitchen and we can break off a dried leaf whenever we want it. This way, I can leave the dormant tree undisturbed in the basement.

But as soon as summer comes – if the snow ever melts so summer does come – and the bay tree is back outside flourishing in the sun, when we want bay leaves, we go out and cut fresh ones. (I confess that I do go down at Christmas time to steal a couple of fresh leaves to garnish our chicken liver pâté with green peppercorns.)