summary: recipe for roti jala based on a recipe in FlatBreads and Flavors by Jeffrey Alford and Naomi Duguid; coconut chicken curry is great with roti jala; our video of making roti jala; information about Baking Through Flatbreads and Flavors (BTFF) (click on image(s) to see larger views and more photos)

A group of us are baking our way through the wonderful cookbook/travelogue “Flatbreads and Flavors” by Jeffrey Alford and Naomi Duguid. Some of us (cough) are doing more baking than others. The group began in Mexico with corn tortillas and Pueblo chile bathed pork. Malaysian Roti Jala and Gulai Ayam is the second part of the group’s task. What a comedy of errors! 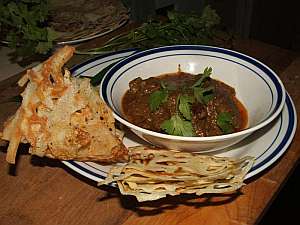 Have you had your shroves today? We did. And last night too. Not just any old kind of shroves, mind. We had lacy Malaysian-style shroves made with coconut milk. Yes, thanks to Naomi Duguid and Jeffrey Alford, we made Roti Jala.

They suggested that the best thing to have with roti jala is chicken curry. We played fast and loose with Duguid and Alford’s curry recipe. Ha. When I say “we”, of course I mean “he”. Because T did all the mixing. I did all the reading….

Because yesterday was a holiday in Ontario (Family Day…), we got the chicken and coconut milk on the weekend. Except for the lemon grass and coriander leaf, we had all the other ingredients already. Or at least, I thought we did. Except for the macadamia nuts. But I was sure we had cashews. It turns out that Someone ate them. (Hmmm, is it my imagination or do you too hear someone humming G&S’ “Carefully on Tip-toe Stealing”?)

Our plan was to bicycle to the near-by Indian grocery store right after breakfast to get lemons, limes and coriander leaf. Yes. You heard me correctly. T decreed that we wouldn’t use lemon grass. I would have insisted if the lemongrass I grew this summer had survived under the lights in the basement. But, of course, T is right. Lemon zest works quite well as a substitute for lemongrass.

Anyway. That was the plan. So imagine my surprise as I was just starting to put on my layers of sweaters and scarves when I heard the fridge opening and the gentle clatter of pots and utensils coming from the kitchen.

Yup. T was happily making curry. And it smelled wonderful. He triumphantly called me down to see how beautiful it was. It was a lovely soft rose-red colour. He had added a half a red pepper to the paste. How brilliant was that?

And then I saw that the two tins of coconut milk were still unopened. Yes. Again, you’re right. T didn’t put coconut milk in the curry. (I did say “fast and loose”, didn’t I?) He put in shredded coconut and water and butter. It looked exactly as if it had been made with coconut milk. I repeated that it would be fun to add just a little coconut milk just before serving, the way that it says to do in the recipe. Because, after all, the roti jala recipe calls for 10 oz of coconut milk and our tin has about 12 oz. We can use the extra 2 oz in the curry.

Okay. We’ll do that.

And out we went to get lemons, limes, coriander leaf and green beans.

When we got home, we were amazed to see that in our absence, the curry had oxidized and turned brown. It still looked and smelled fine. It just wasn’t a beautiful rose colour. Hmmm, perhaps it needed a touch of lemon or lime juice to set the colour.

T added some lime zest and lime juice to the curry and then got cracking on making roti jala. I decided to leave him to it and asked to be in on some of the swirling.

From the other floor, I heard happy pounding from the kitchen as he punched holes in the bottom of the coconut milk tin. And then a little later, he came racing up the stairs and said, “Here. Taste this. What do you think?” handing me a piece of a crepe. A piece of a crepe that didn’t look even remotely lacy.

me: It’s pretty good. But it’s not done.

he: The holes are too big. So are the holes in the cheese shaker. The batter just whooshed out onto the pan. I’m going to the dollar store to get a squeeze bottle.

And off he dashed on his bike. He returned with a turkey baster, a squeeze bottle and some plastic funnels. He paid $3.00 for the lot. 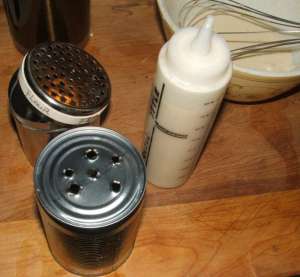 I quickly washed all the objects and T immediately started sucking batter up with the baster (“Cool!! It works!!!”) and transferring it into the squeeze bottle. He put the lid on and said, “Watch!!”

me: [rushing closer to see the squeeze bottle lid resting on a deep bed of batter on the tava] Are you okay? What happened?!

he: [sighing] …yes… the stupid snap top lid fell off [pouring most of the batter back into bowl]

me: It seems to be fairly secure now. [shaking it upside down and pouring batter in a thin stream into the bowl]

me: [laughing] I screwed the lid on.

The amazing thing was that the “snapped down” lid actually stayed on for any length of time at all!

T cooked the batter that was on the pan and transferred it to a plate. I went to get the camera and in my absence, he had eaten all the evidence (!)

I asked if I could try making one. Sure. Why not?

I decreed that there was too much oil on the pan and that it was way too hot. We turned the heat down and at last the flicked water beaded and jumped around the pan beautifully.

And I tried making my first roti jala. Whoohooo!!! The squeeze bottle rocks! I made one. Then I made another. And another. Then T tried.

We were so thrilled with ourselves that we made a video:

By this time, we had run out of batter. So we opened the second tin of coconut milk (see? It was GOOD that T didn’t use actual coconut milk in the curry!) and mixed up another batch of batter. (Hey!!! I just remembered. We forgot to hold back a few tablespoons of coconut milk for the curry just before serving it. We used another favourite saturated fat to soften the curry: butter.)

Here’s what we did to make the roti jala.

1.) coconut milk: The tins we buy are 398 ml. Duguid and Alford call for a 10 oz (~300 ml) tin. Tinned coconut milk has varying degrees of thickness. We always shake the tins when we buy it and chose the brand that sounds the thickest. This particular batch of coconut milk was very very thick.

3.) roti jala dispenser: There are roti jala dispensers available on the internet – both plastic and metal. It would be fun to have a metal one as an interesting display piece in the kitchen but it really isn’t necessary. Alford and Duguid suggest puncturing holes in the bottom of a can to run the batter through but we found that we couldn’t easily (at all) create the lacy effect. We bought a squeeze bottle with a cone shaped top at the dollar store. It’s easy to fill it using a turkey baster. (Tip when using a turkey baster: avoid, at all costs, placing it beside the hot burner so that it rolls into the burner to melt… happily, the baster still draws even when there is an extra hole at the bottom. Ssshhh… don’t ask for any more details.) 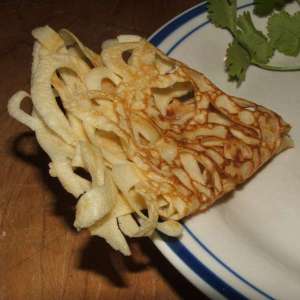 Ha. And here I thought our curry was nut-free. I was just informed that T put pecans into the curry. Hmmm, I wonder if we would have noticed anything different if they weren’t there.

T couldn’t get over the lovely delicate flavour of crispy toasted coconut in the roti jala.

I loved the delicate flavour as well but why oh why couldn’t I taste the coconut?! Or smell it either? Even this morning, when we reheated the rest of the roti jala to drizzle with honey, I couldn’t taste the coconut. But they were still as wonderful as ever and quite delicious with coffee. (I sure hope that the Roti Jala Police won’t come after us for having them with honey instead of coconut chicken curry!)

Lacy Coconut Milk Pancakes roti jala – Penang
[…] To get the lacy effect, you need a roti jala pourer: Take a small tin can open at one end, punch six holes in the other end, punching them out from the inside (use an ice pick, or a large drill bit and a hammer), and you have our newest kitchen implement. The dough is poured form the can onto the hot pan in a slow swirling motion, creating a lacy layer-upon-layer pancake. […]

Coconut Milk Chicken Curry gulai ayam – Penang
The Nyonya culinary tradition began in the nineteenth century, evolving out of intermarriages between immigrant chinese men who had come to work in Malaysia, and Malay women. […] Gulai ayam is one of many remarkable recipes that have been handed down through generations of Nyonya cooks in Malaysia. […] The meat is coated in a blended spice paste, called a rempeh, then coconut milk is added to make a rich sauce that softens the edge of the spices and bathes the chicken as it cooks. […] Much to our regret, coconut milk is loaded with saturated fats.

Now, where was it that I read that the fat in coconut milk is good for us? I was SURE I had heard that it was one of the good kind of saturated fats. So we can have as many roti jala as we like.

I still have great plans to making part one (Pueblo Chile Bathed Pork and Corn Tortillas) but I missed the deadline – so what else is new?

But I’m very pleased to be on time with part two (Roti Jala and Gulai Ayam). Roti Jala turned out to be pretty easy to make. And VERY satisfying. We’ll have them again for sure.