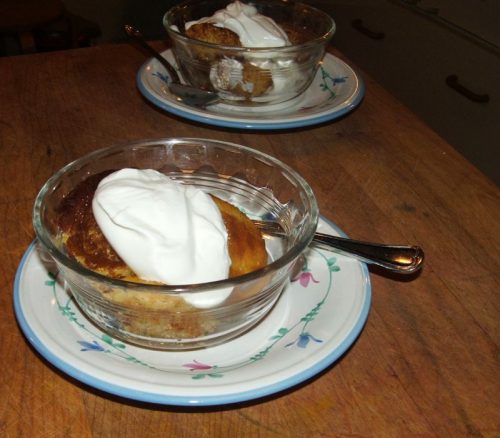 I cannot believe that I have never raved here about Rum Babas! T made them for his birthday last year. I meant to rave out loud in here about them then. We even took pictures! (Well, actually, we didn’t manage to take pictures of them served last year. I guess we were too busy stuffing our faces… this year, I made sure to snap the above photo before we took the bowls to the table.)

I was so certain that I had already blogged about rum babas that when T went looking for the recipe to make Rum Babas again a couple of weeks ago, I told him to look here first for the recipe. But no. I’m wrong again – the BBBabes’ Champagne Babas are as close as I got.

I remember the first time I tasted Rum Babas was when I was about 14. Mum made them for their New Year’s Eve dinner party. The same 3 couples always got together, switching houses from year to year. None of us children were invited to those dinner parties, but we got to taste little samples of some of the things that were to be served whenever the party was at our house. 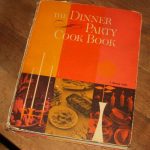 On the Rum Baba occasion, Mum used her wonderful Dinner Party Cookbook (Sunset Books 1962), following the recipes in ‘Dinner Party for Ten’. The menu included Veal Birds. I LOVED them. I remember being amazed and thrilled at the flavour of tarragon. That’s right. I had never tasted tarragon before that. And after that first taste, I wanted to have tarragon in everything from then on! And it was dried tarragon! (We really should try making veal birds, shouldn’t we? I wonder if they will be as fabulous as I remember. Hmmm. I wonder if we should use fresh or dried tarragon?) 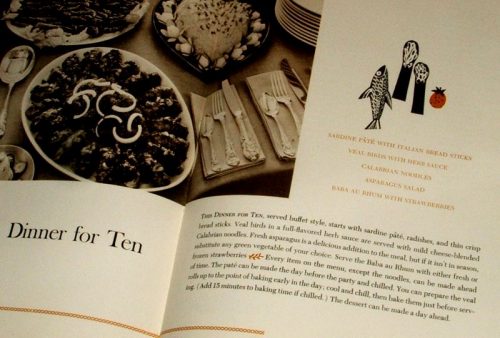 But I’m getting off track – back to the babas…. As I recall, I didn’t really like Rum Babas. I wasn’t so keen on the rum. Silly young me. I have grown up now – j’adore Rum Babas….

I think I’ve mentioned it before: Brioche dough scares me. The fear of using all that butter and sugar in a yeasted dough dooms me. The yeast smells my fear and laughs quietly at me as it sits stubbornly in the bowl, refusing to eat because it has suddenly decided it has to go on a fat-free, sugar-free diet.

But T is fearless. And every time he makes Babas, the yeast embraces the butter and sugar and the dough turns out beautifully.

T even thinks that rum babas are easy to make.

As we searched for clues about which recipe had been used, he found the notes he had made in a text file on his computer. But he cleverly had neglected to put in the amounts for the ingredients. Oops!

I reminded us that I was pretty sure the recipe he uses is from Braun Multipractic Plus Cookbook, the recipe booklet that came with our food processor (or did Mum give us that booklet, or did it come with the food processor? It’s so long ago that I can’t remember…).

Needless to say, even if that’s the recipe we use, we don’t use the food processor to make the babas. Why would we? It’s way easier to clean a wooden spoon and a bowl than it is to take apart and clean the parts of the food processor!

(Because I’m too lazy to go down to the kitchen, I just looked online to double-check the title – there is one used copy available on Amazon. The price is Cdn$81.73!! Hmmm, maybe we should be taking better care of our copy. Perhaps we should be itemizing it in our wills.)

But we weren’t absolutely sure if T had used the Braun Multipractic Plus Cookbook recipe when he made babas for his birthday in 2019. So we looked at the likely cookbooks on our shelf. When I read out “currants” and “apricot jam” in the Dinner Party Cookbook recipe, he exclaimed, “No!” that he would never add currants to Rum babas! 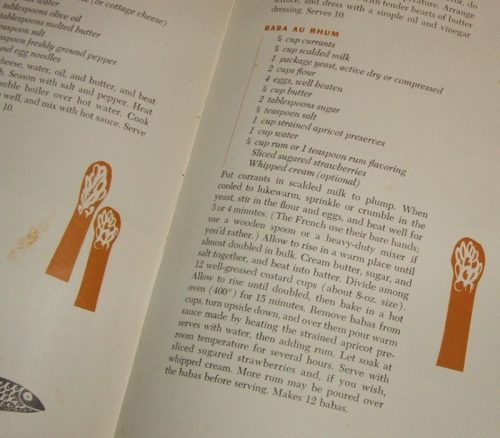 Then I looked in The Joy of Cooking. There, in T’s handwriting were the pencilled words, “use Multipractic Book, page 88”, circled twice.

That clinched it. Obviously, the ingredients amounts we use for babas must be in the Multipractic Savarin recipe.
So, armed with the actual recipe, as T went into the kitchen to get flour and sugar and eggs out, I began typing.

Even though we use the Multipractic Cookbook recipe, I’m pretty certain that whenever babas have been made in our kitchen, zero machines (aside from the oven) have been employed. In spite of what might be written in the recipes we have.

[S]tir in the flour and eggs, and beat well for 3 or 4 minutes. (The French use their bare hands; use a wooden spoon or a heavy-duty mixer if you’d rather.)

We aren’t quite as intrepid as the French though. We use a wooden spoon.

As I was typing this, T called frantically from the kitchen “Can you come and help me?” I ran down to see that he was struggling to release the babas from the muffin tins.

He: [cursing quietly while scraping at the sides of the muffin tin] Do you think I was supposed to grease the pan?
Me: [invisibly rolling eyes] Yes. Doesn’t the recipe say so?
He: My notes don’t.
Me: Your notes don’t even have amounts for the ingredients.
He: Oh yeah. . .

I supposed it was possible that the instructions might be missing the step to oil the pan (it does seem like one of those obvious givens for cake making – even if it’s yeasted cake). So I just looked: The Multipractic Savarin recipe does indeed say, “Place dough in a greased 200mm/8in ring mold, level the top“. The Joy of Cooking, the Complete Book of French Cooking, and Mum’s Dinner Party Cookbook go even further:

Prepare dough for:
Bunkuchen, 620
Brioche, 615
[…] Bake them in greased muffin or popover tins.

– Babas au Rhum, The Joy of Cooking, p689
The dough used for rum babas is identical to that used for savarin (see page 500) […] Butter 8 baba molds and fill with dough 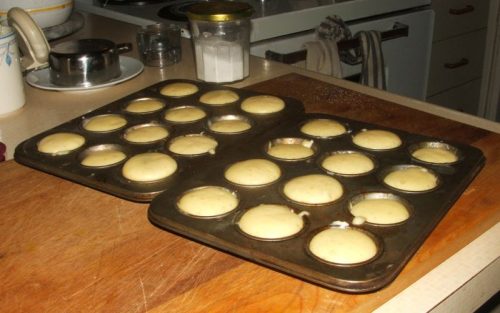 just out of the oven 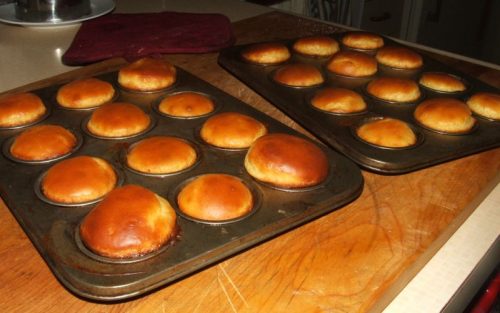 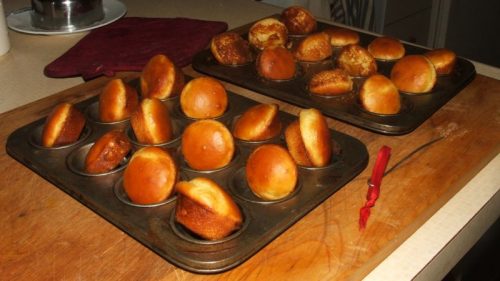 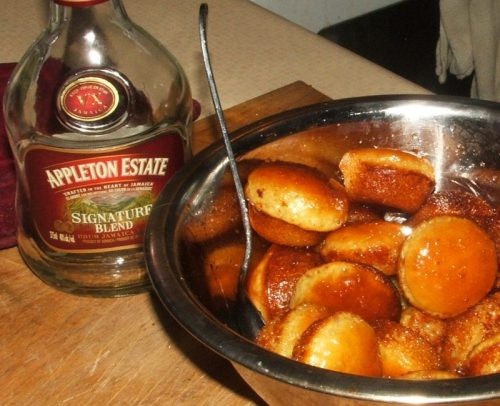 Here is the recipe we use:

T’s Savarin (Rum Baba)
based on the Basic recipe for sweet yeast dough (Savarin or baba) in the Braun Multipractic Plus Cookbook, p88.

Syrup
This is the perfect amount of syrup for this recipe

Serve 2 or 3 babas in individual bowls. Top each bowl with whipped cream.

:: The small muffin tins that T mentions are actually small tart tins that I rescued from Mum and Dad’s kitchen when we were down-sizing them from their house to a small assisted living apartment. And yes, please do grease the tins with butter before adding the Savarin dough….

:: A little apricot jam placed on top of the whipped cream is also delicious AND attractive. Oooh, or how about sour cherry jam? Or plum? Or…. 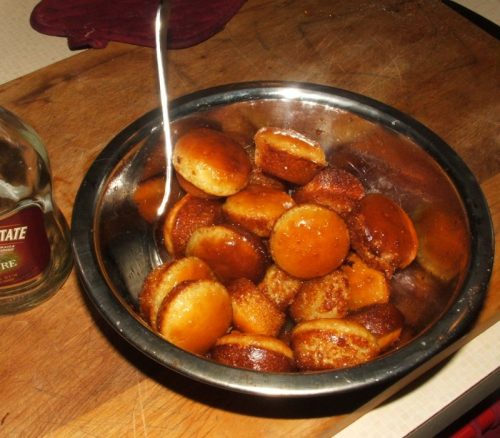