Because she loves bread, Zorra (Kochtopf) has started a new monthly event, “Bread Baking Day”. She loves herbs too so the first theme is “herbs”.

Initially, I blanched. Don’t get me wrong. I love bread and herbs too. But generally, I prefer that the bread be made with just flour, water, yeast and salt. With maybe some olive oil and perhaps some milk and sugar or honey. And any herbs are strictly for garnish or cooked into an accompanying dish.

Okay okay, you’re right. I also like to put caraway or fennel seeds or cinnamon into some of the bread I make. And perhaps a few raisins. But cinnamon, raisins, caraway and fennel seeds aren’t herbs. But I definitely wanted to participate in the event. What to do… what to do…

And one warm day not long ago, the answer presented itself. Focaccia.

Of course!! Focaccia with herbs on top is perfectly acceptable! Not just acceptable, but it would be delicious! Exactly the thing to have with a grilled chop and steamed green beans.

At first I thought I’d use rosemary. But then as I was out surveying the estate (*cough*), the sage beckoned to me. Its pungent scent was pervasive as I brushed a few leaves. Suddenly I neeeeded to try sage on focaccia.

I haven’t yet made focaccia often enough using the final steps in shaping described in Piano Piano Pieno by Susan McKenna Grant. They call for a rising time of about 3 hours after shaping! (read more here) But the day that I made this sage focaccia, not only was it a coolish day but I didn’t shape the focaccia until 6:00 pm. Oh oh….

And I forgot that the larger of our pans doesn’t fit easily into the barbecue. Oh oh….

And we were so worried about burning the focaccia on the bottom that we turned the heat down too low on the barbecue. Oh oh….

Needless to say, I was a little concerned. 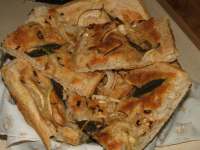 Even after the bread appeared to be done (taking much longer to bake than we anticipated). Even after hearing lovely crisp sounds as the pizza wheel whizzed through the baked bread. In fact, even as I was crankily taking this photograph of the finished bread. Yet in the back of what was left of my mind, I couldn’t help thinking that it looked pretty good. Smelled pretty good too.

And son of a gun! It was pretty good… no, not “pretty good”; it was really good!

The only vague disappointment was the sage. The leaves were lovely and crisp but they lost their wild saginess almost completely. The onions completely overpowered their now delicate flavour.

But the red gold salt was fabulous. It not only looks beautiful but there is a sweetness that marries wonderfully with its saltiness. We’ll have to seek it out once our little stash from the “Salts of the World” box is depleted.

These are the recipes I used:

(Please note that I no longer oil the rising bowl – I really should revise those instructions! After kneading, I simply put the dough into a clean bowl, cover it and leave it on the counter to rise. There is absolutely NO need for oil on the bowl. When the dough has risen, it slips easily out of the bowl.

The other important addition is sprinkling the shaped bread with coursely ground salt.)

I don’t just love breads, I also like herbs. So I suggest as theme for the first breadbakingday: bread with herbs.

Go to your garden or balcony and harvest your favorite herb. If you don’t have access to fresh herbs you can also use dried ones.

Use yeast, sourdough and any flour you like, but don’t forget to add the herb(s).

The deadline for BBD#01 is Sunday, 1 July 2007. For complete details on how to participate in this event, please go to:

I just realized that I could have made saffron buns!! (Or is saffron considered to be a spice rather than an herb?)