summary: recipe for samosas and chole (chickpea curry); homemade samosas are fabulous AND easy to make; taking photos can be challenging when there is a kitten involved (click on image for larger view and more photos) 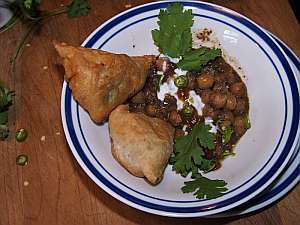 Whenever we go to Indiatown to stock up on spices, we arrange to go right around lunchtime, so we can stop at MotiMahal and get a plate of samosas and chole. Their samosas and chole are very good and the samosas are as satisfying as any we’ve had outside of India.

Or at least they were until last Sunday.

But I’ll get back to Sunday’s samosas. First, indulge me as I reminisce about the best samosas we ever had. Samosas so good that we vaguely considered backtracking to get more but weren’t quite willing to deal with the consequences.

We were on the last stretch of an amazing journey that had taken us mostly by train from Calcutta to Varanasi to Lucknow to Allahabad to Khajuraho and were en route for Calcutta to catch our plane home. We had stayed the night in Satna, one of the most unpicturesque places we’ve ever encountered. It was a busy city (who knows what all those business men were doing in Satna? it seemed like a one-horse town) and when we arrived in the evening, we had barely managed to get a hotel room. Our train was due to leave at 8:00 the next morning; all we wanted to do was sleep. All the other occupants of the hotel wanted to do was anything but sleep….

Here is what I scrawled in my diary:

Excerpt from my Voluminous Diary:

What a nightmare at the Park Hotel last night. […] The room was filled with mosquitoes. They sprayed the room but we discovered this morning that the “screened” window was [propped] in front of a wide open one. So it was freezing in the room and the mosquitoes just kept filing in with their bibs on. […]

It was incredibly noisy and we didn’t sleep very well. It was a great wave of human noise and commotion that ebbed and crested liike a great rolling sea. And it was punctuated all night long by people washing dishes (stainless steel and brass) cracking them on the pavement, music blaring from nearby rooms, (3:00am! 4:00am!) people coughing their scurvy phlegm, (1:30am! 3;37am!) people calling Vijay! Vijay!, room buzzers sounding like an ill padded bell – clunk clunk clunk clunk – to sumon waiters, (went on continuoulsy) flipflops slapping the hallways, ebbing and cresting , ebbing and cresting all night long. […]

Needless to say, we were exhausted. I can’t remember now if we actually managed to find breakfast that morning but I do remember that just before leaving Satna, we stopped at a tea stall near the train station and bought some samosas to have on the several hour train journey.

They turned out to be the best samosas we have ever had. Ever.

Was it because we were starving? Exhausted? Relieved to be gone from the din? We don’t think so. Those samosas were sublime.

So. If you ever find yourself wandering around in a daze near the train station in Satna, look for the tea stall that sells samosas. And buy several for your train journey. You won’t be sorry.

But if you aren’t quite in the vicinity at this moment, you can make pretty spectacular samosas to rival the Satna samosas right now. Sunday’s radically changed recipe for Greek Easter Bread pretty much outlined what we did to make our recent samosas but it bears repeating without all the strikeouts: 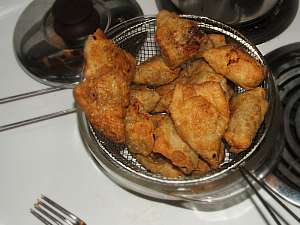 Samosas
loosely based on the recipe for samosas on Manjula’s Kitchen.

Samosas can be served at room temperature, but we like to serve them immediately with pear and/or tamarind chutneys and chole (chickpea curry). Garnish with coriander leaf. 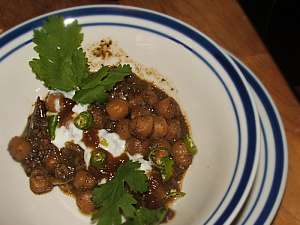 Chole (Chickpea Curry)
based on our recipe for Rogan Josh

Serve the chole in bowls drizzled with a little plain yoghurt thinned with water, tamarind chutney and garnish with coriander leaf and chopped green chiles if you like. Chole is great with samosas. It is also wonderful served with aloo chops as part of a vegetarian dinner.

We didn’t have any curry leaves on hand to make puliyinji so T made a different kind of tamarind chutney to go with our samosas. It was easily as wonderful (different, of course) as puliyinji. Stay tuned for the recipe; I’ll try to remember to post the recipe soon. 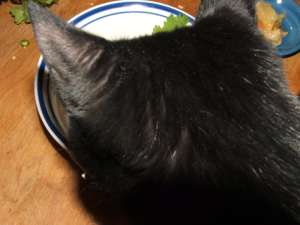 Taking photos fo this was even more difficult than usual. The little black furry creature posing as a young cat was alternately assuming that it was time for a rousing game of “Pounce” at our feet or leaping onto the stepstool, very curious about what was going into the bowl. For me??? Is that for me???? 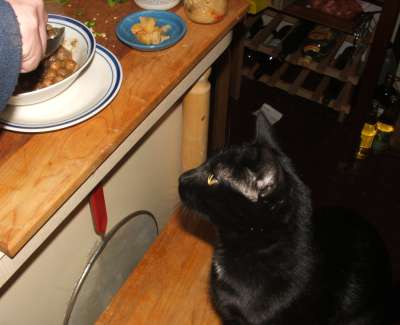 1 response to “samosas and chole”