Oh this is too much!! A couple of days ago, as I began drafting this post, it snowed again! And last night the temperature dropped to -20C. Hmmm. I wonder if it has something to do with the fact that this is the 13th outing for

Waiter, there’s something in my… salad! 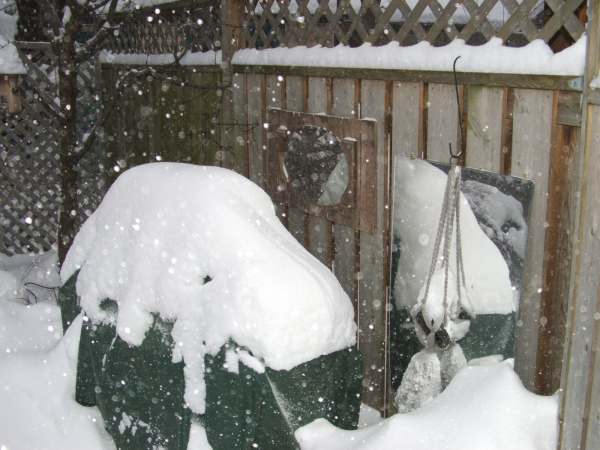 This month, Andrew (Spittoon Extra) is suffering from a “slight icky, run-down feeling” and has asked people to make Seasonal Salad. Seasonal ingredients for a salad HERE?! In February?!! Especially this February? Oh oh.

Let’s see now. Traditionally, in this part of the world, the only fresh vegetables available to us would be what could be kept in a root cellar: beets, carrots, cabbages, potatoes.

Yes, I could have made another beet salad. But I just posted about that in December (it’s great salad too). I contemplated getting a red cabbage and making some sort of red cabbage cole slaw. (I still plan to do that but just won’t manage it in time for the WTSIM… deadline.) 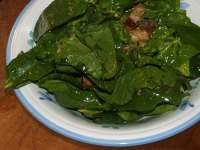 The kind of salads we have been favouring this winter are salads in warm dressing. Just this week, we had a red lettuce salad with ham and garlic. (Did I take pictures? Duh. No. Because I thought I’d already taken many pictures of this kind of salad….) So in keeping with the organizational skills I have been displaying lately, the salad pictured here was photographed last November.

But trust me, we have had a similar salad on several occasions this winter. We usually use red lettuce or spinach and almost always include pieces of good smoky ham in the dressing. For our 2007 Christmas Eve feast, we served red lettuce salad with oven-dried pears, goat cheese and a warm vinaigrette. (Again, photos? You expect photos?? Cue more hysterical laughter)

We don’t actually measure ingredients for salad dressing. Instead, we use the following guidelines given to my dad by an Italian colleague, whose father had handed down the perfect salad dressing recipe to him (father to son kind of thing for generations):

Here’s how we made the spinach salad in the photo (and all of the other leafy salads we’ve had this winter that will seemingly never end). The salad was made with fresh spinach from somewhere in the USA – no doubt it was hothouse spinach:

Salad with Warm Dressing
as mentioned, no measurements… just wing it

Oh of course!! Wouldn’t you know it? We just saw the perfect salad for this event on Laura Calder’s show “French Cooking at Home”. She made a fantastic looking Belgian Endive salad with blue cheese, beets and walnuts. We neeeeed to make that salad….

What I am thinking of, in regards to salads, are seasonal ingredients. I would have called it Winter Salads but the bottom-end of the world is of course in Summer and lets not forget the middle-bit that doesn’t really bother with summer or winter. The list of ingredients is therefore wide open. It would be great if the ingredients were local, were all seasonal, organic, fair-trade […]

The deadline for WTSIM… salad! is 29 February, 2008. If you would like to participate, please read the following for more information: