summary: trying again to make Arkatena Bread; chickpea flour starter sure does bubble; how to deal with failure; crackers;

I feel like such a failure, having resorted to adding commercial yeast! Our fake Arkatena bread was really good though. I do plan to try again with the actual recipe – really I do

I took heart when I saw other BBBabes’ successful attempts at baking Arkatena bread. I was especially entranced by Tanna’s bread!

It starts out simple enough. The starter is made with chickpea flour, and because of the nature of chickpea flour, only takes 3 days to accumulate enough yeast to raise the dough.

Katie’s right! It does seem simple. And it worked for other BBBabes. Surely it could work for me!

And so I did try again. Really I did. I had to. How could I not with the amazing bubbles created by the chickpea flour starter? 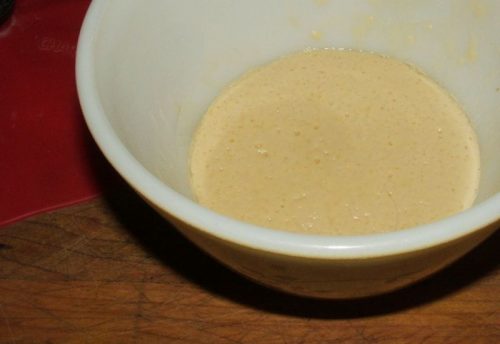 This time, I took photos. Here’s how things went:

16 January 2020, 23:18 I am bolstered by the following:
Some say this is a difficult bread … I found it very cooperative in coming together. -Tanna (My Kitchen in Half Cups)
Even though Tanna claims it wasn’t difficult! Clearly, Tanna has the magic touch…. Maybe I can too!

17 January 2020, 11:50 It’s possible that my chickpea flour “leavener” from earlier in January might have worked if I had given it more time. I did notice a significant mousse-like texture at the bottom of it when I added it to the actual dough. I HAVE to learn to be willing to change my schedule to adjust to the dough’s erratic and capricious nature. (Remind me.)

Because the resulting bread is quite delicious….

I WILL try making the Arkatena bread again. Next week… and I think I’ll try using Wolfert’s idea of an aromatics infusion, instead of adding fennel seeds to the dough.

24 January 2020, 23:59 I don’t know why I’m so surprised. But not only did the chickpea flour go all moussey by this afternoon around 3pm. If it had been a different colour, it would have looked just like the very finest chocolate mousse! 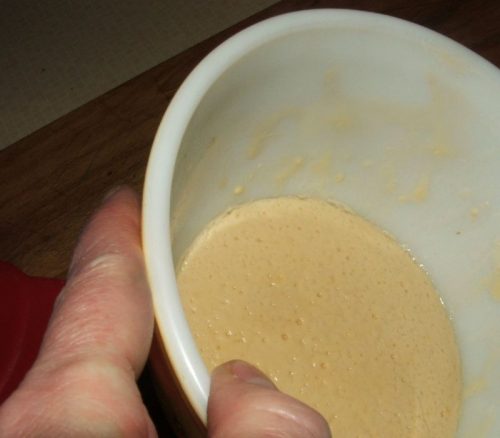 Thrillingly, the 3rd part of the chickpea starter (the part with some added wheat flour) bubbled too. 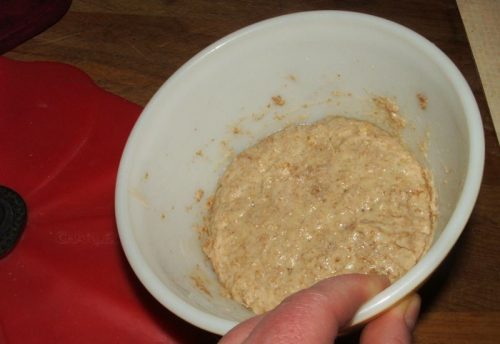 I have now stirred in all the leavener ingredients, and am pretty certain that it is going to be bubbling like crazy tomorrow morning. How cool is that?! 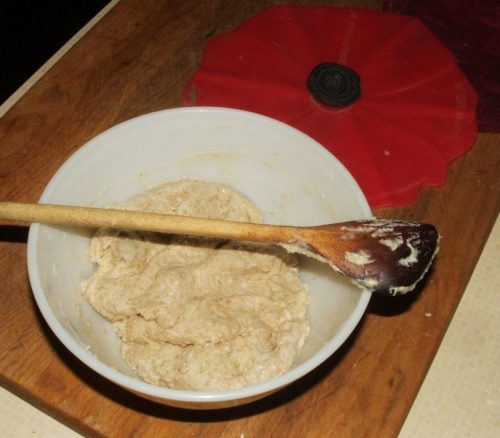 25 January 2020, 11:11am Hmmm. Not bubbling like crazy at all. Not really bubbling at all. Although, it does seem to have puffed out a tiny bit. It’s quite stiff in comparison to the Tartine leavener. Is this stuff supposed to float before I use it?
Cover and leave in a warm place for 4 hours. […] [The] leaven is ready when it has expanded appreciably but not collapsed on itself.

– Andrew Whitley, Arkatena Bread, Bread Matters, p192
Four hours, eh? So far it has been eleven hours. It has definitely expanded, but I wouldn’t say the expansion is “appreciable”.

17:36 Waaaahhhhhhhh!! The so-called leavener is just sitting in its bowl like a stone. I’ll leave it a little longer. Then maybe I’ll throw in a spoonful of our Jane Mason starter to get it to actually leaven.

I feel doomed…. How embarrassing to fail at the bread I chose.

26 January 2020, 11:44am Nothing. 35 hours after mixing the so-called leavener and the sludge hasn’t moved one iota. Rather than resort to adding yeast again, I’m going to turn the sludge into crackers, because this chickpea flour starter is eluding me. I suspect that I’m not going to try again, although I may add chickpea flour to one of our regular bread doughs. I may even add the fermented chickpea flour to the dough. But I don’t think I can bear the idea of failing again. It’s too much pressure.

Cover the dough with plastic wrap or a lid to keep it from drying out and let it rest at room temperature for at least 7 hours.

About twelve hours after the last entry to the above diary, as I was staring at the horrible sticky guck in the bowl, I thought of Bill Bryson walking the Appalachian Trail with his friend Katz.

I waited for Katz for three-quarters of an hour, then went looking for him. The light was fading and the air was taking on an evening chill. I walked and walked, down the hill and through the endless groves of trees, back over ground that I had gratefully put behind me forever, or so I thought. Several times I called his name and listened, but there was nothing. I walked on and on […] Finally, I rounded a bend and there he was stumbling towards me, wild-haired and one-gloved and nearer hysteria than I have ever seen a grown person. […] None of the things that had been dangling from the outside [of his pack] were there any longer.
“What did you get rid of?” I asked, trying not to betray too much alarm.
“[…] I don’t know what all. Lots. […]” Katz was almost cataleptic with displeasure. […] I saw his glove lying in the path thirty yards back and went to retrieve it.
“OK,’ I said when I returned, “you haven’t got too far to go.” […] “I’ll take your pack.” I lifted it onto my back. It wasn’t exactly empty now, but it was decidedly moderate in weight. […] I found us a site on the edge of the clearing, almost in the woods, off by ourselves. […]

When I awoke, it was daylight. […] My water bottle was frozen solid. This seemed gratifyingly macho, and I examined it with interest, as if it were a rare mineral. […] Katz was crouched over the campstove, boiling a pan of water. It was cold, but perhaps just a trifle warmer than the day before, and a low dawn sun burning through the trees looked cautiously promising. […] “Is there a reason, I asked, “why you are filtering the coffee with toilet paper?”
“I, oh … I threw out the filter papers.” […]
He gave me an apologetic look. “I threw out the brown sugar too, so there won’t be any sugar for the oatmeal.”
Ah. “Actually, there won’t be any oatmeal for the oatmeal. I left it in New Hampshire.”
He looked at me. “Really?” then added, as if for the record: “I love oatmeal.”
“What about some of that cheese?”
He shook his head. “Flung.”
“Peanuts?”
“Flung.”
“Spam?”
“Really flung.”

– Bill Bryson, A Walk in the Woods, chapter three

It’s official. I am a wastrel. Because I didn’t make crackers. I just couldn’t. The sludge stank too sourly. I couldn’t bear the idea of throwing away any more ingredients.

I also couldn’t bear to take a photo of the disgusting mass that had done nothing except get smellier. Decidedly smellier.

You probably guessed what I did with the second attempt at Arkatena “Leavener”.

I cannot get over how difficult Arkatena bread is! Or, at least it is, in OUR kitchen.