I am a glutton for punishment. Yes, once again, I am a 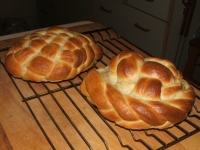 Even though this time I’ve managed to make the bread in time, I’m afraid that I can’t be a BBB because

Are you a glutton for punishment? If so, get as comfortable as you can, fasten your seatbelt and forge ahead through this even more than usually long-winded post.

Ever since seeing the article RECIPE REDUX: Challah by Amanda Hesser in the New York Times, I had been dreaming about making challah again. (Last time I used “Grandma Rosie’s Fabulous Challah Recipe” that I found on the internet and it turned out beautifully.) I toyed with the idea of using the “2008: Challah Revisited recipe” in the Hesser article but after reading the labour intensive instructions, I balked. I didn’t really like the massive ingredients list (which included baking powder, vanilla and cinnamon!) for the 1976 version of challah in Hesser’s article – although I suppose I could have used the normal ingredients list from the 2008 version and the 1976 instructions….

Right around the same time that the BBB’s made their challah calling for regular yeast, Eli (thefreshloaf.com/blog/eli) made Maggie Glezer’s sourdough challah from her book A Blessing of Bread. This particular bread uses a firm starter. (Firm starter?! I don’ know noth’n’ ’bout makin’ no firm starters, Mizz Scahlet!) I don’t have A Blessing of Bread yet (I do have Glezer’s wonderful book Artisan Baking though and it’s one of my favourites). And my other cookbooks talk about how to make firm starters but, but, but… I need hand-holding with new techniques. ESPECIALLY where wild yeast is concerned.

So I did an internet search to see if anyone else had made Glezer’s challah. And found yet another version of Glezer’s challah on Tatter’s blog, “The Bread Chronicle”. This one is made with a liquid levain. Ah, that’s what I like to see!! I’m familiar with liquid levains. Not exactly an expert with them but at least I’ve used them frequently.

I really liked the idea of using wild yeast to make challah. Both Tatter and Eli said that the challahs they had made using a Glezer recipe (I gather there are a number of challah recipes in A Blessing of Bread) were “the best” and “favorite”. And the added bonus to the Glezer version Tatter used was that it also calls for commercial yeast to bolster the wild yeast. Considering my problems with wild yeast when the kitchen is cold, this seemed like a good idea.

So I began my semi-wild challah experiment. I used the extra liquid levain I had after mixing wild bread (that unfortunately ended up being flat as a pancake – I blame our cold kitchen). But you’ve already heard me complain about that. Allow me to stay on topic and complain about the challah.

As I mixed the dough, the ice cream maker (yes!! we have our own ice cream maker!!!) was blaring in background; there were T’s white beans boiling furiously on the stove (I ran upstairs to find out if they’re supposed to – NO, they’re not! – ran back downstairs to turn them down to a simmer); stretched and folded the wild bread dough; ran back upstairs to look at the challah recipe again (why on EARTH didn’t I write it down???); ran back downstairs to continue mixing dough to the sound of T hand sawing a little piece of wood to fix the a drawer that had broken; stopped to sort through and separate kidney, black, garbanzo and navy beans that had been rolling around in the bottom of the overfull drawer; stretched and folded the wild bread dough; went for a bike ride (it was SUPPOSED to be raining all day but the sun came out); panicked that neither the wildbread OR the challah dough had moved but decided to go ahead anyway because it was getting late; ran back upstairs to look at the braiding technique again (why on EARTH didn’t I write it down???); rooted through my desk and dresser to find six ropes, ribbons, sashes to test my braiding technique; ran back downstairs and promptly forgot how to six-strand braid, kicking myself, all the while, for trying to make two kinds of bread on the same day (what a moron I am). (Ha!!! I am the run-on sentence queen!!)

Sometimes things just seem too frantic on a slow rainy day off…. 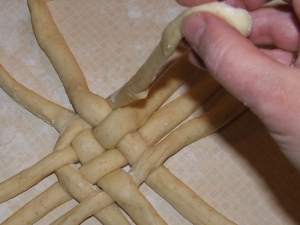 Here is what I did to make challah, which isn’t at all as difficult as I managed to make it:

Under no circumstances should you use water from the hot water tap. Of course, saying that it is unsafe to use water from the hot water tap might be an urban myth, but why tempt fate? Heat the water in a kettle or microwave and add cold water until it is the correct temperature, (use the baby bottle test on the back of your wrist – your fingers have no idea of temperature!) Or you can use a thermometer.

***** Because this challah calls for butter and cream, please ensure that it is served with dairy or eggs to your Jewish friends. In Jewish households, challah must to be made with oil and brushed with egg if is to be served with meat. 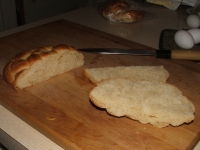 I’m sure that it’s incorrect to have that little bit of whole wheat flour but I really like to add just a little (using Carol Field’s idea of adding wholewheat flour to our highly refined white flour to mimic stoneground flour). I think the tiny bit of whole wheat adds flavour as well, making the bread seem not quite so much like “white bread” that can be so flavour-free.

Our challah was wonderful! Wonderful and flavour-full. I loved the honey in it. And it was really fantastic for breakfast with hard boiled eggs and strong coffee with lots of cream.

I’ve been given a big green light to make challah again. Next time, I’ll may try making it with brown sugar instead of honey. Perhaps I’ll use oil instead of butter as well. I bet it’s still just as good…

(And yes, Glezer’s book A Blessing of Bread is now on my “wish list”. I think I neeeeed to have it.)

Sara (I Like to Cook) is the host of October 2008’s Bread Baking Babes‘ task. She wrote:

It’s a lot of pressure to come up with a recipe for these ladies; something interesting, fun, different…. I sat myself down with my copy of The New York Times Bread and Soup Cookbook […], and at one point I had 18 bread recipes marked! It was a tough choice, but I decided on Challah […]

Take a look at the Bread Baking Babes’ challah:

The Breadline Africa Worldwide Blogger Bake Off Challenge was created and began on 15 October 2008. (It ends on 15 October 2009 or when US$1 million has been raised, whichever occurs first.)

For more details on how you can join in, please see:

Breadline Africa is an internationally registered charity supporting ground level African charities that are working with communities to help them to become self-sustainable and “break the cycle of poverty in the lives of individuals and communities in Africa through sustainable, long-term solutions“.

5 responses to “semi-wild challah: round I go again (BBBwB)”