(Click on image to see larger view and more photos) 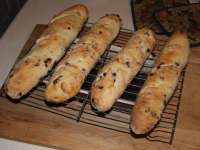 As soon as I saw Susan’s (Wild Yeast) post entitled “Semolina Bread with Fennel & Currants (and Pine Nuts)”, I knew I HAD to make it. (Make sure to take a look at Susan’s bread.)

I love currants! I’d never had pinenuts in bread before but felt certain they would be delicious. Fennel seed is fabulous in bread and perfect for Bread Baking Day #04. The only thing that disturbed me was the semolina. I’ve only tried one semolina bread before (from Carol Field’s Italian Baker and it wasn’t a huge success. It wasn’t bad but we never felt the urge to have it again. Since that failure, we have just used semolina for making pasta.

Still, Susan’s description and photo were just too compelling. Good thing too! This bread is going to be a standard with us.

I can’t decide what I like more about this bread.
The aroma of it baking?

But when I make it again, I probably won’t include the pinenuts. It’s not that we didn’t like them in the bread. They were wonderful. But they weren’t nearly as wonderful as the currants and almost got lost. Which is a shame. Because when one considers the price of pinenuts, pinenuts should stand out and be the central feature.

And I may add more fennel seed. When the bread was baking, the house was absolutely full of the scent of fennel. I worried a little that I’d gone overboard. But amazingly, once the bread is baked, the fennel seed takes a back seat to the currants! And when the bread is toasted, the fennel seed almost disappears entirely! In toast is where the pinenuts do make their presence known. In that delicious pinenut way they have. Even so, I will probably omit the pinenuts when I make this bread again. Which I will. It’s too good!

Here is what I did to Susan’s recipe:

*Tap water is fine to use – just make sure that it has stood for at least 12 hours so that the chlorine has dissipated. Please refrain from using water from the hot water tap. To warm up the water, heat it in a kettle or microwave; add heated water to cold until it is the right temperature (do the baby bottle test on your wrist).

** Please note that a Canadian cup holds 250ml. When I measure flour, I really fluff it up in the bag before scooping out flour to roughly fill the cup.

*** Remarkably, the Canadian quarter cup measure holds only 60ml. (I know. 60×4=240. The cup measure manufacturers must have been away the day the class learned about fractions….) Sometimes, I am very casual and just eyeball half of half a cup when measuring a quarter cup. But usually, if a recipe calls for a quarter cup, I use the quarter cup measure. But the ¼ cup markers on the liquid measuring cup are evenly spaced to have around 62 ml….

If you have not yet captured wild yeast, please take a look at: 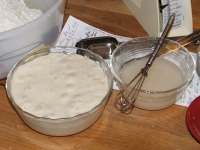 This bread calls for wild yeast AND commercial yeast to get it to rise a little faster. Susan uses instant yeast in her bread. I never have instant yeast on hand so substituted active dry. And because there is no sugar, rehydrating the active dry yeast doesn’t create a spectacular show of foam and just looks somewhat milky. 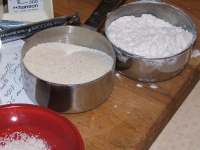 When I was kneading, I thought the dough would never smooth out completely. We buy our semolina in Indiatown – semolina is called “suji”. T uses it to make fresh pasta and the pasta doesn’t get smooth until it has been rolled many times through the pasta maker.

Even after about 10 minutes of kneading, I decided that the bread dough would probably always be a bit grainy feeling. I added the currants and pinenuts and amazingly, as I was working the dough to distribute the currants evenly, the dough suddenly became smooth and silky! 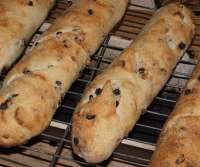 It rose beautifully too and for once, I was even able to form baguette shapes as Susan suggested. (I almost chickened out and made boules – baguettes have always eluded me.)

I also managed to slash the loaves! This is something else that has been giving me difficulty. But because the bread had not over-risen, the slashes actually worked. I particularly like the one with the “ears”. I used scissors for that one.

I really couldn’t be more thrilled about the bread. I have only one complaint. It takes no time for a loaf to disappear!

Thank you once again, Susan!

You can enter any type of bread (yeasted, sourdough, or quick breads, sweet or savory), as long as it contains one (or more) spice(s).

For complete details on how to participate in BBD#04, please go to:

Even though I still have a horror of the word “foodie” and visibly cringe even when I type it, I must accept the fact that language evolves… this particular “F” word should not to be considered a disparaging term. My reluctant acceptance (almost – I’m still shuddering every time I see it) of the word is partially due to The Foodie BlogRoll (TFB), started and maintained by Jenn (The Leftover Queen). It is a handy (and growing!) list of links to food related blogs. You may have seen the TFB image on the sidebars of this and other blogs.

This blog has recently been officially added to TFB. (Thank you, Jenn!) It’s easy to join The Foodie BlogRoll – just fill out the form at the bottom of the linked page.

Take a look at the list of all the blogs already on the list! This community is HUGE!