summary: stir-fried cabbage and rapini is the best; playing the Glad Game;

Whoohoooo! It’s above freezing and the roads are clear!

We went for a glorious bike-ride on Saturday. Before leaving, we chatted with our neighbour across the lane. He was happily chopping ice from the lane, thrilled to be outside in shirtsleeves. And so, as we rode north from the lake (that’s uphill…), we too had to stop to peel off scarves, mittens, extra sweaters, etc. etc. Because even though the gardens are still covered in snow, the sun was shining, and the roads were clear.

What a change from the weekend before when it took me twice the time it usually does to drive on snow-covered roads to get to work! When I got there, someone asked a colleague how her drive had been. Her reply: “Grim.” 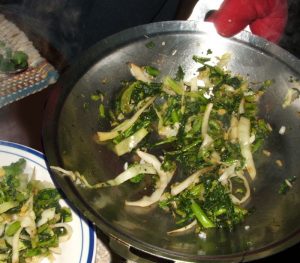 The night after that dreadful drive, when it was still cold and snowy outside, we were rifling through the vegetable drawer to get the rapini and saw that there was quite as much as we had thought. There was only enough for one person. And there were two for dinner.

If there hadn’t been snow and ice all over the roads, we would have jumped on our bikes to race to the vegetable store. Walking would be equally treacherous and too slow (not everyone in our neighbourhood is diligent about clearing the snow from the sidewalk…). Of course, we could have taken the car. But that wouldn’t be right!

So, we pondered. Here’s how the conversation went:

me: What about those green beans?
he: They’re almost all gone. That rat [the furry black fiend disguised as a cute little cat] ate them.
me: There’s spinach in the freezer.
he: Eww. No. That would end up being slimy.
me: Do we still have a cabbage?
he: Yes!! Let’s have that!

I don’t know why we keep forgetting just how great stir-fried cabbage is! It doesn’t stink; it holds its shape; it’s good for us; it tastes great.

Usually we slice it thinly and stir-fry it: a.) with mustard and cumin seeds, blackened chillis, onions, ginger and shredded coconut, if it’s with Indian food, or b.) with ginger, garlic and fermented black beans, if it’s with Chinese food.

But this time round, dinner was decidedly western. We were having chops with marmalade glaze and mashed potatoes. So, to prepare our vegetable, T simply added thinly sliced cabbage to the rapini as he was stir-frying it with garlic and a dried chili or two. 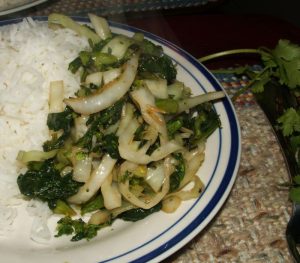 Now, I suspect that if the rapini is omitted from stir-fried cabbage, we’ll be pouting and saying that something’s missing.

Time to go out and get more rapini! And. What a bonus!

We can ride our bikes to get it.