summary: Shepherd’s Bread based on a recipe in “Bread for all Seasons” by Beth Hensperger; a Bread Baking Babes project; submission for YeastSpotting and Bake Your Own Bread; (click on images to see larger views and more photos)

It’s a miracle!! I made the bread on time! 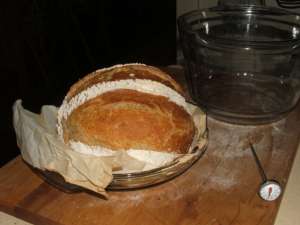 And what fabulous looking bread it is too. I’m so thrilled with the oven-spring. The deep crevices from the slashes disappeared entirely, creating an amazing contrast to the heavily floured outside!

This bread made with all-purpose and whole wheat flours as well as a small amount of rye flour, was baked under a dome for the first 30 minutes. Talk about a steam chamber!

Sure, it looks like a soccer ball. But it doesn’t seem like it’s is going to bounce across the kitchen floor.

EEeek!!! I can’t be missing yet another BBB deadline! I’d better get started!

I’m a little concerned about WHAT I’m going to bake this bread in. T has nixed me using the clay baker because I made the mistake of telling him that Karen’s bread had stuck to the bottom of her Römertopf…. Oops.

The others mentioned that this makes A LOT OF DOUGH, so I’m going to make half the recipe.

There has been a lot of discussion about putting that dry and cold earthenware pot in a preheated hot oven […] I know you’re not supposed to do that. I’ve been doing it every time I bake bread in this thing and there has been no cracks nor explosions. Disclaimer: my pot may not be your pot and no, I won’t replace yours if/when something unspeakable happens. =:~0 I’m not sure but I think wetting the inside of the cover may help preventing cracks??

I still don’t know what I’m going to bake the bread in. I have a large pyrex covered casserole dish; I wonder if that would work.

22:02: I have no mind!! I just remembered that I had decided to make the starter tonight after dinner. (Yes, I know; it’s still after dinner now….) Luckily, making a starter doesn’t take too long.

And because the others murmurred something about this making lots of bread, I decided to halve the recipe.

Oh yes… it’s to mix bread dough. I just realized that I managed to forget to add sugar to the starter last night. I wonder if that will make very much difference to the outcome.

Maybe I should venture into the kitchen to see what has occurred overnight. My fingers are crossed that I’ll see plenty of bubbles.

05:59: Why is it that I ever doubt yeast? Of course there were bubbles in the starter. Bubbles galore.

And so, I got out the scale again – I love to weigh the ingredients – and began mixing the dough. But. The recipe we’re using this month is from a book that uses cup and spoon measures.

Even though Karen did say how many grams of flour she used. But I thought I’d check my scooping skills. And very interesting results there were too. The first cup of all-purpose flour that I scooped out and weighed was 141gm. The second cup weighed only 128gm (yes, I used the same cup). I then weighed a half cup of whole wheat flour – I’m incapable of making 100% white flour bread. That half cup of flour was 56gm.

Beth Hensperger’s half-recipe calls for 2.5 to 3 cups of flour. I decided to hold back a half cup. But I measured it anyway, just in case I wanted to use it. The final half cup of flour weighed 64gm.

How interesting that I managed to get the same weight per half cup of all-purpose flour after weighing the first cup. But still. There’s quite a difference between 70gm and 64gm when they are multiplied by 5 or 6.

See why I prefer to measure by weight? That way, the only variables I have to deal with are temperature and humidity.

I noted that the recipe calls for a good shot of olive oil. Keeping the inadvertant decision to omit the sugar entirely, I made another executive decision to use only a quarter the amount of oil.

And then it came to the salt. No weight measures… just spoons. I weighed a generous 0.5 Tbsp of our fine seasalt to come up with 7gm. I hope that will be enough salt…. I just now checked to be reminded that USDA Nutrient Database says 1 tsp = 6gm table salt See???? THIS is why I prefer measures to be in weights! (Please read more about measuring salt.)

Kneading was a breeze – I added about a quarter of the extra 64gm of flour that I had set aside. See why I like to measure by weight? (...snicker...)

The kneaded dough is now proofing in the oven with only the light turned on. I think I’ll jump back under the covers now to sleep a little longer and get up at a reasonable hour.

09:32 I can’t believe how much the dough rose! And Karen is right. That is STICKY dough! Shaping was easy though. I was extremely prodigal with flouring the outside of the loaf (but duh… I forgot to spray it with water first).

10:17 The oven is still preheating – I just looked at the shaped bread and EEeeeeeeeeeeek, it’s rising already. I wonder if I’m going to be able to get the cloche on! (and off again when it comes time to remove it)

10:38 Oh oh. Am I going to be able to remove the cloche? The bread has spread out to meet the walls. 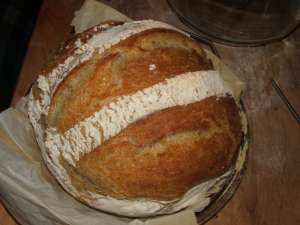 10:59 Whoohooooooooo!! The lid came off with no difficulty at all. How silly of me to worry.

And talk about oven spring! Wow.

When I showed T the bread, he was as thrilled as I about how much it popped. He says it’s the most beautiful bread I’ve ever baked!

And then we talked about what to serve it with tonight at dinner:

me: Let’s have lentil soup!

he: [looking horrified] Lentil soup?! NO. Meat! We need meat! It’s beautiful outside. And we have some coffee barbecue sauce left still. Let’s barbecue.

And so we jumped on our bikes, stopping at the vegetable market to get some beautiful looking broccoli and then headed to the butcher’s shop to get some pork shoulder. It’s marinating now.

I can’t WAIT for dinner so I can see what the inside of this bread looks like!

Here is this month’s BBB Shepherd’s Bread recipe. And here is what I did to it:

1.) Sugar: I didn’t leave the sugar out on purpose. I really didn’t. I had intended to use less than the recipe called for and then because of the late hour, I simply forgot to add it.

2.) Oil: The recipe calls for 4Tbsp of oil. Irritatingly, I am having to drastically restrict my fat intake right now, so I decided to use just 1 Tbsp. I did consider omitting it entirely but then decided the bread wouldn’t be even close to the same as the other BBBs’ Shepherd Bread.

3.) Measuring the salt: Alas, the recipe did not give weight measures for the salt and merely says to use 0.5 Tbsp. It should also (I think) say 9gm. Salt crystals are so variable. Our seasalt is far flufflier than table salt. And each Kosher salt crystal is quite a bit larger. (Please read more about measuring salt.)

4.) Amount of Flour: Karen says she used 385gm of flour. You may want to play with the amount, depending on how much sugar and oil you put in. Karen mentioned that her bread dough was very sticky. (Have you ever forgotten to add sugar to cake batter? I have. The batter is really stiff and dry. But as soon as the sugar is stirred in, it suddenly liquifies.)

5.) But I like warm bread!: If you wish to serve warm bread, reheat it after the loaf has cooled completely. To reheat UNsliced bread, turn the oven to 500F for 5 minutes or so. Turn the oven OFF. Put the bread in the hot oven for ten minutes.

Thank you, once again, Karen! I can’t wait to taste this bread! I suspect we’ll be making it again and again.

this is seriously goodlooking very good tasting bread!
We are baking not as much a novel recipe instead we -or at least I- am revisiting a method which I really like but can cause some discussion or frustration….

Baking in a cloche!

Discussion because oh horror! we’re instructed to put a COLD cloche in a hot oven. Yes it works, No it won’t break. Yes I know you’re not supposed to do that. Discussion over?

Frustration because arrgghhh we’re instructed to heavily flour the cloche….. I’m using my mom’s old Römertopf. The inside is so smooth and there’s this pesky indentation in the bottom both of which will cause my loaf to stick no matter what or how. So I’ll use parchment. Bye Bye screwdriver to get my bread out.

Thank Heaven for parchment paper! There is no way that I’d have been able to heavily flour our pyrex casserole dish….

We know that you too will WANT to bake this bread!! To receive a Baking Buddy Badge to display on your site: bake Shepherd’s in the next couple of weeks and post about it (we love to see how your bread turned out AND hear what you think about it – what you didn’t like and/or what you liked) before the 29 May 2012. If you do not have a blog, no problem; you can also post your picture(s) to Flickr (or any other photo sharing site) and record your thoughts about the bread there. Please remember to email the Kitchen of the Month to say that your post is up.

Please take a look at the other BBBabes’ Shepherd’s Bread:

Traditionally baked in a cast-iron pan submerged in a small, ember-lined pit covered with dirt. It is easily adopted to conventional home ovens by baking it in a contemporary clay cloche, a cast iron Dutch oven with a tight fitting flanged lid, or on a pizza stone.

This Basque bread is a relative of the simple Spanish and Greek peasant loaves of Europe.

– Beth Hensperger, “Bread for all Seasons”

I completely forgot to ask Karen how to bake the bread in an ember-lined pit. Wouldn’t that be a kick to do? Remind me to call the gas company before we dig the hole in the back yard…. 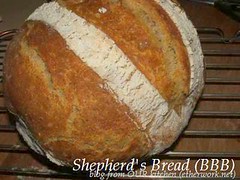