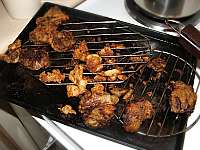 Did you know that fried chicken livers are insanely delicious? How is it that I didn’t know about this delicacy before?!

The first time we were to have them, I said that we HAD to have onions with them. T agreed and asked if I preferred them cut thinly or diced. Here’s how the conversation went:

me: Thinly sliced. They caramelize better.

he: Caramelize?? I’m not cooking them! They’re supposed to be raw.

me: (silent agonized shriek) Raw?! No. When have you ever been served raw onions when you get liver and onions?

me: (perplexed) On a blue plate special? They’re never raw. (resignedly) But if you want them raw, you can have them raw… I’ll caramelize some onions for me.

he: Okay. Okay. Both ways. (brief pause) Should we have bacon too?

Naturally, when we served the livers, I tried the thinly sliced raw onions, and I must admit, they are a great addition! Not that I would want to give up my caramelized onions though….

And as for the bacon – I can’t believe I’m saying this – but if it wasn’t there, I wouldn’t miss it.

And what gave us the idea to try this at all? It was SAVEUR magazine. (I do love SAVEUR magazine!) I read each one cover to cover, dog-ear interesting looking ideas, then leave them out for T to leaf through at his leisure. Invariably, he latches onto things I’ve missed. Not that I missed the chicken livers… it was the double frying of chicken that escaped my notice:

When I was growing up, my family made regular trips to Louisville, Kentucky, for two reasons: visiting my grandmother and eating fried chicken livers. Grandma was what’s known in those parts as a firecracker; she loved a good manhattan and a lively debate, and she would take us around to local neighborhood joints that served up both, along with an array of bar snacks, including the crunchiest fried chicken livers I’ve ever tasted. […] The crunchy fried chicken livers, piled high in a plastic basket, were amazing.

Twice-fried sweet-spicy chicken has long been a favorite in Korean homes and eateries. […] [W]ings and drumsticks […] are unfailingly juicy inside, crunchy outside. [… The cook put chicken pieces …] in a thin batter of wheat flour, water and cornstarch. Then he gave the wings and drumsticks a nine-minute sizzle in a deep-fryer […] which cooked the meat and formed a light crust. Next […] into a second fryer […and…] Three minutes later, the chicken emerged with a delicate texture and crackly crust. 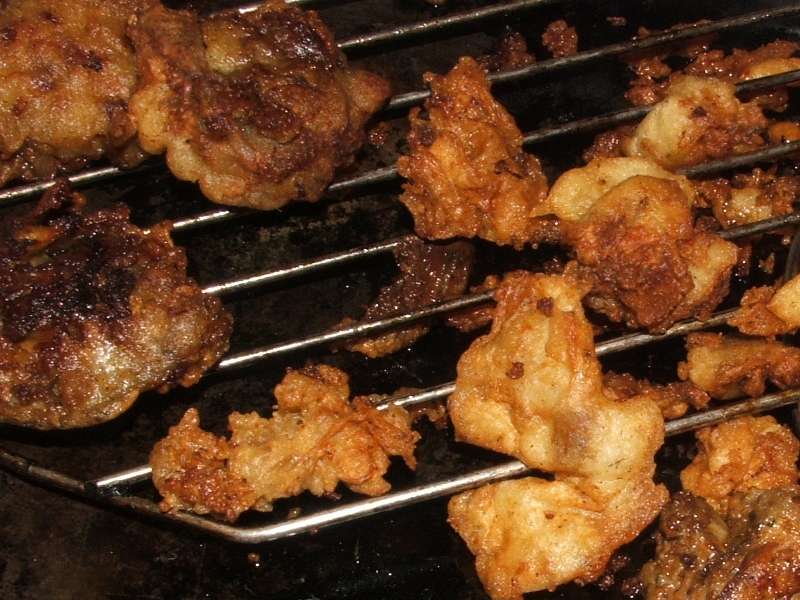 I mustn’t get distracted from these beautiful chicken livers.

After marinating them in a little soy sauce, garlic and thyme, the chicken livers were twice-fried to ensure ultimate crispiness.

Trust me. Looks can be deceiving. These chicken livers really are beautiful. They’re crispy and delicate without any livery flavour. They’re so fabulous that I want to eat liver every night!

Here’s what T did:

Once again, the measurements are approximate….

» It is not necessary to mix the batter in advance. We just find that it makes things easier if we do.

» If some of the livers are large, it’s a good idea to cut them in half so all of them are uniformly sized.

» Fry any left-over batter. Those little crispy bits are delicious.

» If you have fried too many chicken livers, don’t worry. They are EXCELLENT the next day. They stay crispy!! They are especially fantastic chopped coarsely tossed into pasta (stay tuned for the recipe).

And speaking of beautiful…. 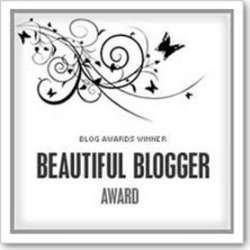 I am absolutely thrilled to have received another award!

Katie (Thyme for Cooking), a Beautiful blogger has honoured me by listing me as a beautiful blogger. (I must say that I’m quite relieved that nobody can see me right now… I haven’t really brushed my hair properly today… I’m afraid they might take my award away….) But. Wow. To think that someone thinks I’m beautiful! Thank you, Katie!!

Naturally, there’s a catch to accepting the Beautiful Blogger award. Because these are closely related to memes. This time, I am instructed to tell seven things about myself and then pass the award on to other beautiful bloggers.

As a freelance musician, I have been asked to play for some very interesting events. Years ago, when Estee Lauder introduced the perfume “Beautiful”, the campaign depicted this bride. Our quartet was asked to play for the Toronto launch reception. The “bride” (looking just like her photograph – not a hair out of place with veil and dress floating out perfectly,) and all her brides maids were there. Estee Lauder herself was attending as well (acting as mother of the bride??). She was quite tiny and yet imposing at the same time, and of course, impeccably dressed – wearing gloves and a very tasteful small hat. I loved Lauder’s speech about the new perfume “Bee-ooo-da-full“. But it was the bridesmaids’ dresses that were the most entertaining things that day.

It never ceases to amaze me that so many bridesmaids are destined to wear some pretty awful outfits (perhaps to ensure that everyone looks only at the bride?) but the Lauder bridesmaids’ outfits were spectacularly awful. They were all dressed as the flowers that went into the perfume, their head dresses being the actual flowers. As I recall, there was a lily, orange blossoms, rose, and at least one other flower (I just looked on the Estee Lauder site. Was it marigold?? I don’t seem to recall a fluffy orange hat. I seem to remember something that looked like a daisy…). At the time, we couldn’t decide if the rose or orange blossoms were the most amazing. And of course, we had to be very careful not to burst into peels of laughter at the poor girls’ expenses.

The orange blossoms model’s headgear was a very wide brimmed hat that had blossoms trailing from it – sort of like a heavily modified sombrero. (I couldn’t quite tell how she could see OR how she managed to walk without tripping on blossom strands.) The rose model’s headgear was a giant turban fashioned to look like a rose. And the key word here is “giant”. As I recall, the turban added at least another 12 inches to the model’s height. These poor girls had to go swanning around through the crowd (without losing their giant headdresses) and smilingly offer perfume samples.

And of course, when the bride appeared, this was the music playing:

Life doesn’t get much better than that.

I got so distracted by recalling those stunning floral headdresses that I almost forgot about my list of some beautiful bloggers. Here they are – in alphabetical order. I’d really like to list more but I believe that the rules confine me to list just 7:

Of course, some of you have already received this award (probably more than once). If you haven’t already done so, please prepare your own lists containing 7 things about you and beautiful bloggers. Or, if you’d rather not, just nod graciously and please accept the award.

No matter what you choose to do, you’ll still be beautiful.

edit: Tanna (My Kitchen in Half Cups) has ALSO honoured me with the beautiful award, along with a beautiful recipe for cauliflower (mmmmm, cauliflower….). Thank you, Tanna!

3 responses to “…so beautiful (cough)”