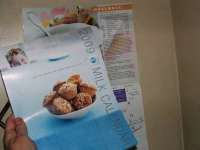 Even though we rarely use the recipes in the Milk calendar any more, we still like to have the calendar in the kitchen. It has nice big squares as well as nice photos of the dishes to prepare.

“For more than 30 years, the Milk Calendar has been the perfect kitchen companion in Ontario homes,” says food specialist and Milk Calendar spokesperson Korey Kealey. 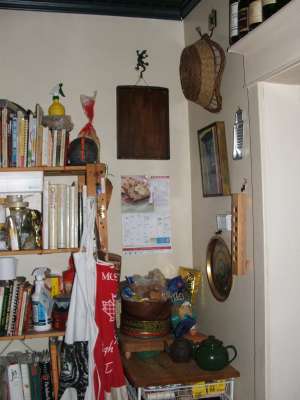 That’s right. It HAS been the perfect kitchen companion for more than 20 years in our home. Until this year. Now it’s useless to us.

The calendar arrives with the Toronto Star on a Saturday in November. There is even a printed note on the current calendar alerting us to watch for the new calendar. When the Toronto Star arrived on 15 November, I eagerly leafed through it to pull out the new calendar. I had difficulty finding it. Because it was a different size. Smaller. Narrower.

Under normal circumstances, we switch to using the new calendar immediately, as it handily begins with December rather than January. This year, however, we are still using the 2008 version.

Here’s what it says on the first page of the 2009 calendar:

We are proud to present the new 2009 Milk Calendar. We have given it a fresh look and different shape that will fit in your busy kitchen and works just as well in helping you plan your daily activities.

Sigh. Why on earth would they think that changing the shape was a good idea?

Let’s get real. The Dairy Goodness folks didn’t change the shape for any reason but to use less paper – it probably costs less to produce this smaller calendar.

WHAT a shame! Even though we rarely made anything from the Milk Calendar (probably haven’t made a milk calendar recipe since around 1985 or so – there was a really good broccoli soup that year), but we liked having photos of dishes in the kitchen. We like getting ideas from the milk calendar recipes (ie: what not to do) and we really do love to make fun of the “tips for the adventurous”.

In the past several years, many of the calendar recipes have been notorious for being somewhat dull…. For excellent reviews of the 2008 Milk Calendar recipes, be sure to read Jasmine’s (Confessions of a Cardamom Addict) series, “Milk Calendar Mondays”.

Alas, alak. The calendar no longer fits in our busy kitchen. We have a spot that is perfect for a normal size calendar. A spot that already houses the city’s recycling calendar. We like having both calendars on the same hook.

The calendar arrives with the Toronto Star on a Saturday in November. There is even a printed note on the current calendar alerting us to watch for the new calendar. Under normal circumstances, we switch to using the new calendar immediately, as it handily begins with December rather than January. This year, however, we are still using the 2008 version. 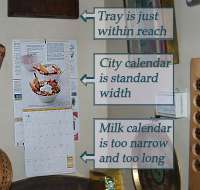 The beauty of the normal width of the 2008 milk calendar (and all the previous versions) is that we can keep the City’s not-so-attractive-utilitarian recycling schedule on the same hook underneath the more attractive milk calendar. See how the 2008 calendar fits almost perfectly over top of the City’s recycling schedule. And see how the 2008 version fits beautifully on the wall between the two trays.

I suppose that we could put the City’s calendar in a drawer and just use the “improved” 2009 Milk calendar. But it would mean moving the calendar hook (putting another hole in the wall) and rearranging where the trays go.

Yes, thanks to this decision to make the milk calendar longer and narrower, we’re going to have to BUY (eeeeeek) a calendar because I’m NOT putting another hole in the wall and I’m NOT moving everything on that wall.

I’m going to really miss laughing at the “Tips for the Adventurous”.

I wonder how many other Canadians who have had the Milk Calendar in their kitchens are planning on putting their 2009 calendars into the recycle bins and buying calendars that actually fit the spots on their walls.

And speaking of calendars, please remember to take a look at this year’s

(don’t even think about peeking ahead on the calendar though).

1 response to “someone “fixed” the Milk Calendar…”