summary: recipe for Soft Pretzels; soft pretzels are fabulous; make sure there’s lots of room in the car when going to buy 2 dozen eggs; information about Bread Baking Babes and YeastSpotting; (click on images to see larger views and more photos)

Here I am, as promised, just under the wire, exactly on time, in my own private schedule on 16 18 September… 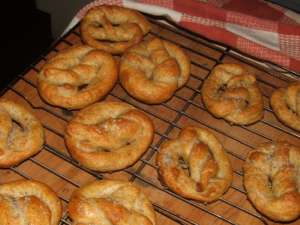 Have you made soft pretzels yet? You must!! They’re fabulous. So fabulous that ours are almost all gone!!

Last night we had the most brilliant and amazing dinner. I’m not sure what one is SUPPOSED to eat soft pretzels with, but we had them for dinner. To go with roasted chicken thighs, we had zucchini fritters, stir-fried beet greens and oven-roasted fennel all made from vegetables that had been harvested the day before. 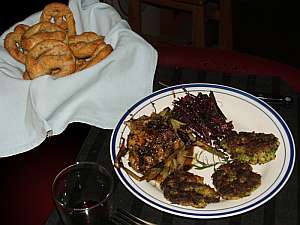 And just in case this wasn’t enough, we rested the chicken and fennel on a sauce made from reduced chicken stock. Oh my.

Why on earth didn’t I pay closer attentions to the more organized BBBabes who made soft pretzels earlier. They did say they were delicious!

I don’t remember if they said they were easy to make though. And they are. They are insanely easy.

11:59 am:
What a change from last week when it was around 25C in the kitchen. This morning it’s 14C in the kitchen. So, I turned the light on in the oven, put the kettle on to warm the water and at last began to mix pretzel dough.

I got jar of yeast out of the fridge and saw that there were only a few grains left. Happily, I had used what’s left of my mind to ensure there was a new jar of yeast in the cupboard. It’s a new brand – for us – and I’m really curious to see if there’s a difference!! I love the name: “British Class Royal Style”. (oh oh, what if it doesn’t work??)

The only major difference between the MyRecipes Soft Pretzel recipe and mine is that they called for 3 1/4 cups flour. I found that I only needed 2 1/2 cups of flour, and I was careful to measure by spooning the flour into the measuring cup.

Not really paying attention, I dumped in 3 cups of flour. Oh my!!! What a stiff dough!! (Hmmm, did Ilva also mention the same thing???) So I add some water.

What kind of flour did I use? The BBB recipe simply calls for flour. I wondered if pretzels were like bagels and were supposed to have high gluten flour in them. I rushed upstairs and did a brief internet search, but by this time, I KNEW that I was past the deadline so stopped after finding the following:

Pretzels are made from white flour and made into either a soft bread-like version or a hard, crisp variety. […] Pretzels are often topped with coarse salt before baking and occasionally other toppings are used, such as sesame seeds or poppy seeds, especially for the larger soft pretzel.

Even though I saw that it was supposed to be white flour (still no clue about whether it should be high-gluten or not), I couldn’t help myself from using some whole wheat as well.

And then I kneaded. Not the easiest dough to knead, what with it being so stiff…. And then put the dough into a clean bowl. (Oops, I see that I was supposed to spray the bowl with cooking spray. Oh well…)

2:05 pm
Hmmm, not really much activity in there. The dough looks about the same size. I turned it a couple of times anyway and was relieved that it felt soft and smooth. Still on the stiff side though.

3:45 pm
Thank goodness. The dough is starting to rise. Maybe we WILL have pretzels tonight after all.

7:28 pm
I decided to divide the dough into 16 rather than 12. And I had no problem getting the dough out of the bowl. (I just can’t figure out why so many instructions say to oil the rising bowl.) And no problem shaping them either.

I placed the shaped pretzels on parchment papered cookie sheets that I’d scattered cornmeal over.

I loved watching the already boiling water foam up when I added the baking soda. Popping the shaped pretzels into simmering baking soda-ed water also went very smoothly. I really liked how they dropped down into the water and then popped up. And they really puffed up!!

I’ve never been a fan of egg washes so I used a milk wash instead. Then I used a spoon to sprinkle on coarse grey seasalt. Oops. Another mistake. I switched to spooning the salt into my hand and using my fingers to put the salt on. I sure hope the first ones are not too salty.

Rrrrrr, I hope we don’t have to switch to having couscous instead of soft pretzels with tonight’s dinner!

7:38 pm
They’re done!! I’d like them to be a bit more golden but they’re definitely done on the bottoms.

7:47 pm
I couldn’t help myself from breaking one of the smaller ones to taste it. Fabulous!!! I love soft pretzels and can’t wait to eat more!

Then T tasted a pretzel: “These are GREAT!! You should definitely make these again!”

I’ll put the couscous away for another day…. 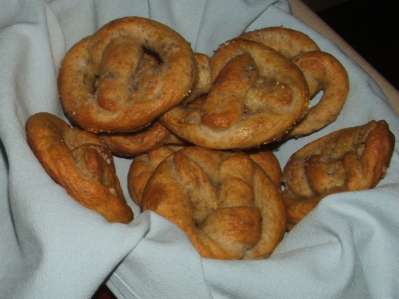 Just in case you haven’t been paying attention, let me assure you that you’ll want to go immediately to your kitchen to make Soft Pretzels. Here’s this month’s BBB recipe. And here is what I did to it:

Soft Pretzels
based on a soft pretzels recipe at myrecipes.com

It turns out that if I actually retained what I read, I would have known what to eat our pretzels with:

A pretzel is a type of basic bread native to Germany that is easily identified by its traditional twisted knot shape that resembles two crossed arms within an oval. In much of northern Europe, this shape is often used as a symbol to signify a bakery.

Pretzels are made from white flour and made into either a soft bread-like version or a hard, crisp variety. The soft pretzel is usually larger than the harder version and is often served with mustard or cheese and is eaten as a snack with beer.

Hmmm, as a snack with cheese and beer, eh? Perhaps this is what we’ll do with the few pretzels that are still left. Or not. Pretzels are awfully good with dinner….

Pat, aka Elle (Feeding My Enthusiasms) is the host of the September 2011’s Bread Baking Babes’ task. She wrote:

For September let’s gather around the kitchen table as the fabulous Bread Baking Babes delve into the past…610 AD in fact…and we can decide if we believe that these bread morsels were used by monks of that time to teach little boys to pray or to reward them for staying quiet during Mass…or both. That’s the story behind Soft Pretzels, called Bretzels in German. The traditional shape resembles hands folded in prayer. Even if it isn’t true, it’s true that soft pretzels are a county fair and mall favorite snack food. I’ve included directions for the traditional salted soft pretzels and for the more contemporary cinnamon sugar ones. However you flavor them, they give you a chance to have fun shaping the dough.

I considered coating some of our pretzels with cinnamon sugar but decided that we already had jam tarts for dessert so just made savoury pretzels.

You might decide differently… please bake along with us and receive a Baking Buddy Badge to display on your site; bake soft pretzels and post about them (we love to see how they turned out AND hear what you think about them) before the 29 September 2011. If you don’t have a blog, no problem; we still want to see and hear about your bread!!

Thank you, Elle! We love soft pretzels! I’ll definitely be making these again. 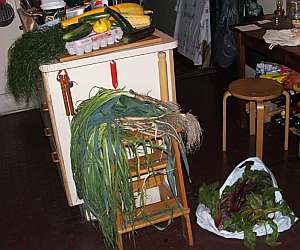 On Friday (not the 14th), we drove north to our friend’s farm to get two dozen eggs from her and suddenly, we found that we had two GIANT bags of salsify, yellow and red beets with the most amazing lush greens, green and yellow zucchinis, an English cucumber, leeks, spaghetti squash, butternut squash, delicata squash, pattypan squashes, jalapeno peppers and a rather large fennel plant (it was the smallest one!!) in the back of the car. Laughing and yelling many thank-yous, we escaped before our wonderfully generous friend could slip any more vegetables into the car. 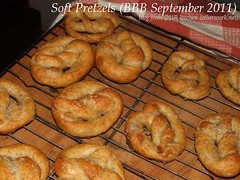 4 responses to “Soon to be Pretzelless Again (BBB September 2011)”